This Vegetarian Tikka Masala is made with cauliflower instead of chicken! This delicious Indian cauliflower recipe is perfect for vegetarians, but it’s also great for usual meat-eaters. The texture of the cauliflower masala (or Gobi Masala) is perfect, and the flavor of the homemade tikka masala sauce is absolutely delicious! Serve it on basmati rice with naan to complete the dish.

Vegetarian Tikka Masala (cauliflower or gobi masala) is the perfect Indian dish for vegetarians and meat-eaters alike. There’s so much flavor in this Indian cauliflower recipe!

Cauliflower Tikka Masala is such an amazing dish. It’s pieces of roasted cauliflower mixed into a tomato-based curry, served with basmati rice and naan bread. YUM!

This Indian cauliflower recipe is a great meat replacement with all of the flavor and texture you would expect from chicken tikka masala. I made my own homemade tikka masala sauce with the perfect level of spice to cover the roasted cauliflower. And it is GOOD if I do say so myself. Indian food is such a fun thing to make (and to eat), and this dish makes for a tasty, healthy dinner.

Whether you eat meat or not, you have to try this vegetarian tikka masala recipe (aka Gobi Masala, aka Cauliflower Tikka Masala). Whatever you call it, it is absolutely delicious!

Vegetarian Tikka Masala made with cauliflower is a super rich and flavorful vegetarian Indian dish you’re sure to love!

Chicken is the most well-known version of this dish, but it can be made with vegetables instead. Cauliflower is used in this vegetarian tikka masala recipe as a substitute for meat. Since there is no meat, a more accurate name would be cauliflower masala, or Gobi Masala as it would be called in India.

This Indian cauliflower recipe is cooked in a tomato-based curry sauce, and served with basmati rice and naan bread. It’s so flavorful and the texture of the cauliflower is just perfect. This cauliflower tikka masala is great for vegetarians, but it’s also just as good for usual meat-eaters. You won’t miss the chicken with this texture and taste!

How to Make Tikka Masala Sauce

Masala is a tomato-based curry sauce used in many Indian dishes, but it’s probably most known for being used in tikka masala here in the U.S. There isn’t a standard tikka masala sauce recipe, as it can vary drastically and still be considered masala. But I am very happy with the recipe I created for this vegetarian tikka masala. You could use this same sauce recipe to make with chicken instead.

It’s a wonderfully spicy, flavorful sauce. I’m kind of obsessed with it! It tastes so good in this Indian cauliflower recipe (gobi masala).

What does tikka masala mean?

Tikka refers to pieces of meat, while masala refers to the curry sauce. More literally, masala just means a mixture of spices, but in this case it is referring to the sauce portion of the dish. So Chicken Tikka Masala is pieces of chicken in a curry sauce. However, in this recipe there is no meat, just pieces of cauliflower.

What spices are in Garam masala?

Garam masala is a mixture of spices intended to heat or warm the body. This spice blend varies depending on where you buy it, but you can expect it to include all or some of the following spices:

This vegetarian cauliflower tikka masala is going to blow you away! The spicy curry sauce, roasted cauliflower, and basmati rice make one delicious dinner that everyone will love.

See the recipe card below for details on how to make Vegetarian Tikka Masala. Enjoy!

If you like this vegetarian Indian cauliflower recipe, you’ll love these recipes too:

Course: Main Course
Cuisine: Indian
Prep Time: 10 minutes
Cook Time: 30 minutes
Total Time: 40 minutes
Servings: 6
Calories: 250kcal
Author: Becky Hardin - The Cookie Rookie
This Vegetarian Tikka Masala is made with cauliflower instead of chicken! This delicious Indian cauliflower recipe is perfect for vegetarians, but it's also great for usual meat-eaters. The texture of the cauliflower masala (or Gobi Masala) is perfect, and the flavor of the homemade tikka masala sauce is absolutely delicious! Serve it on basmati rice with naan to complete the dish.
Print Recipe Rate this Recipe

For the Basmati Rice:

Did you make this recipe?

Subscribe to have posts delivered straight to your inbox!!

PLUS get our FREE ebook, Favorite Easy Chicken Dinners.

The most delicious homemade curry I’ve ever eaten!

Can I use coconut milk instead of cream for vegan meal?

I am already a member of your site love it! Can this be made low fat I could use less oils could I use no heavy cream but replace it with yogurt or almond low fat milk instead of or a combination of the two I have pancreatitis I have to eat low fat but I would love this i would also add chicken breast diced and cooked for my added protein I love all the warm seasonings my favorites!

These are absolutely wonderful substitutions, thanks for letting me know! So happy you’re here :)

Hi, I’m Becky Hardin. Here at The Cookie Rookie you will find trusted and easy recipes for every occasion. Let's cook! 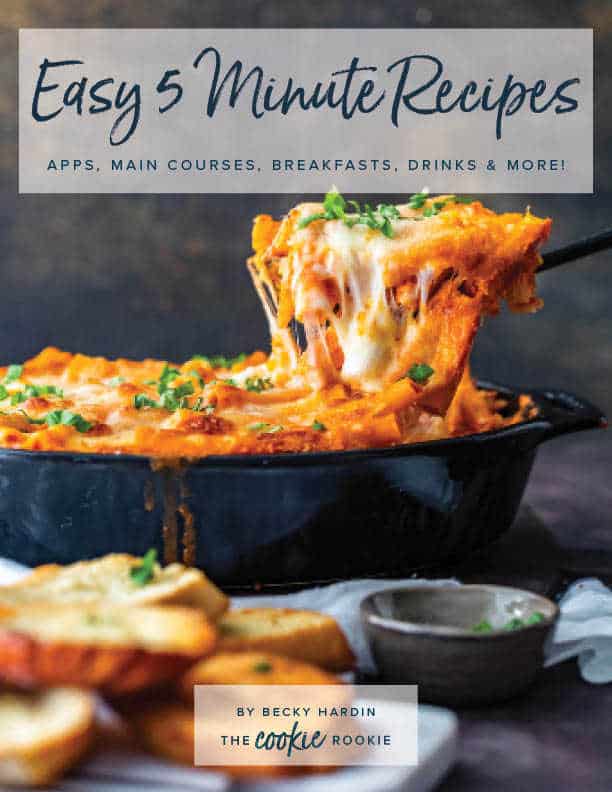 Be the first to know about new recipes, get our free guides and ebook, and become part of the family!

Enter your email address below for your free ebook, "Easy 5 Minute Recipes"

Thank You For Subscribing

Be sure to check your email for your free ebook!

Spamming is not included! Pinky promise.