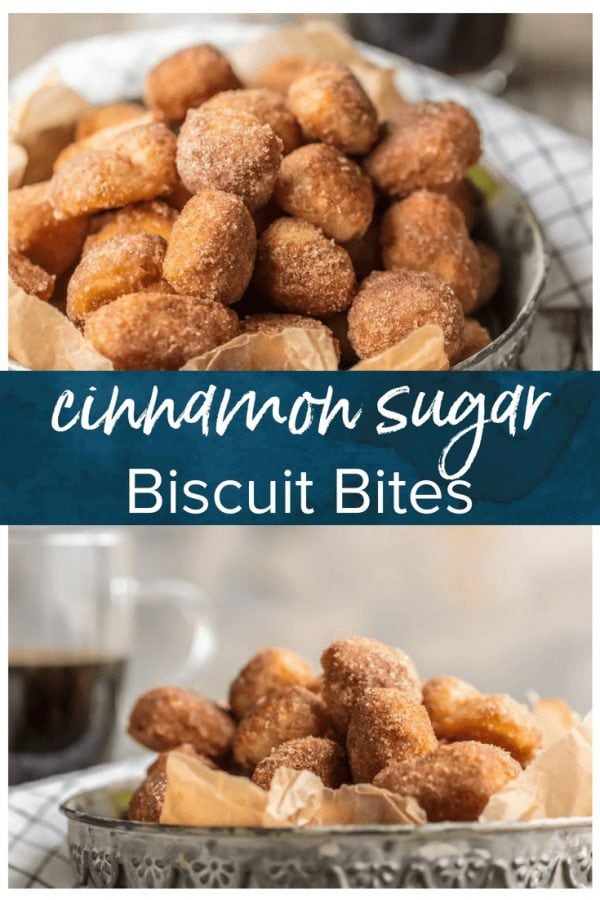 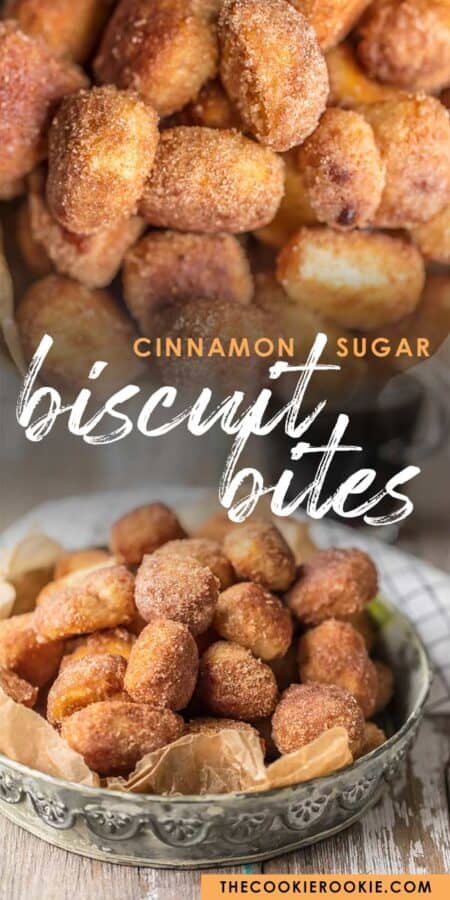 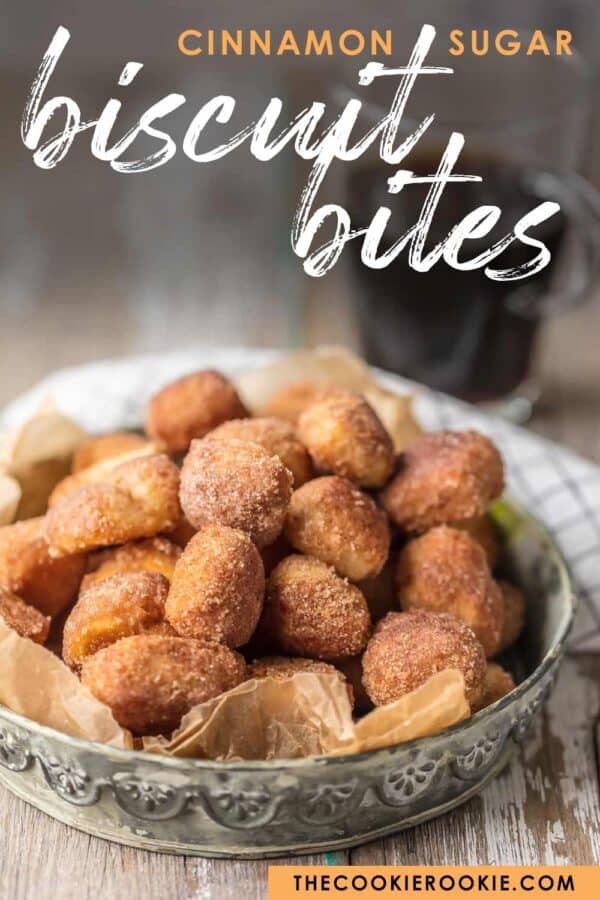 CINNAMON BITES are the perfect breakfast, dessert, or snack for any time of day! These crispy Cinnamon Sugar Biscuit Bites are easy, delicious, and so fun. Making a sweet breakfast treat just doesn’t get simpler than these tasty cinnamon biscuit bites! 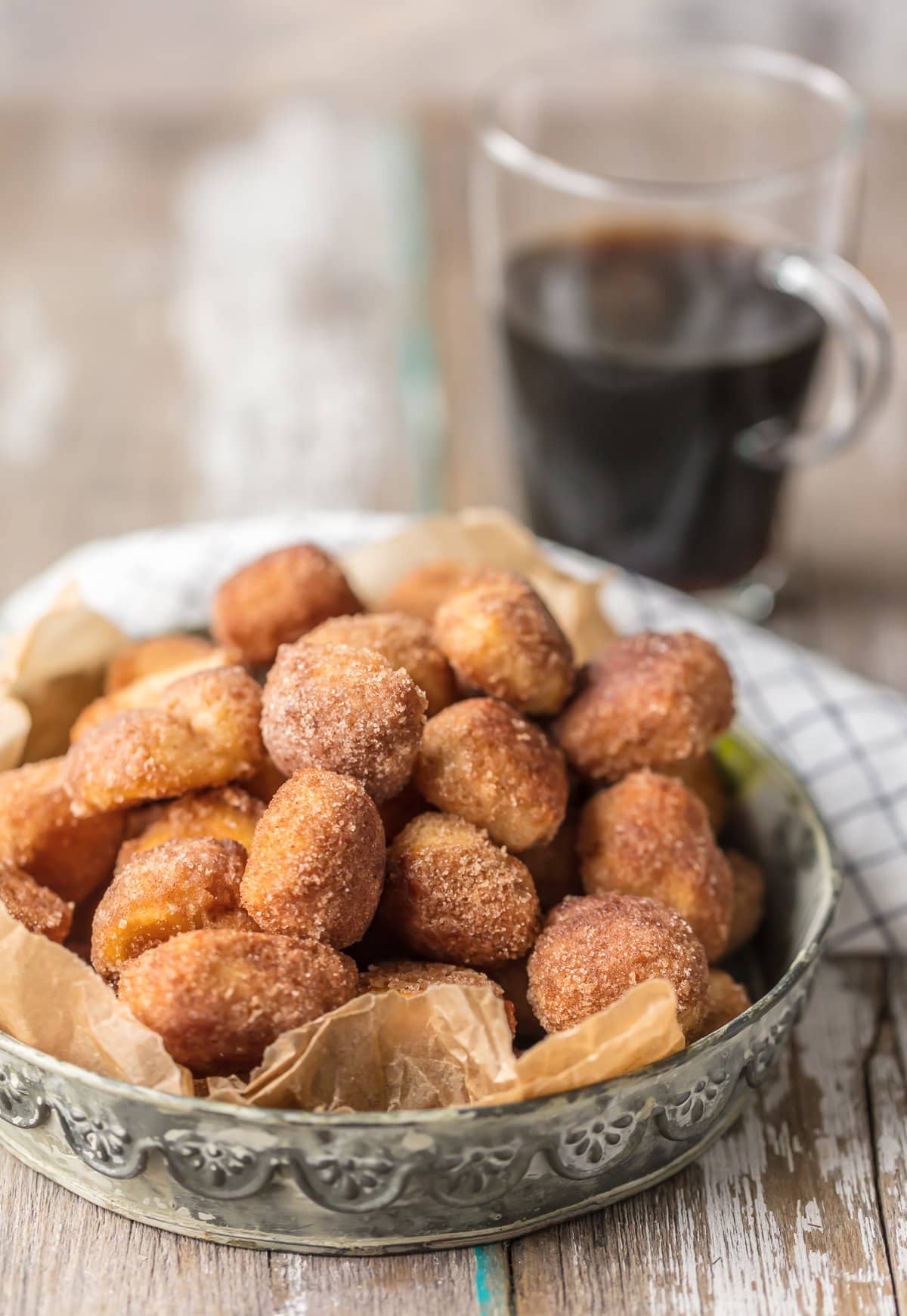 Cinnamon Bites are a tasty sweet treat for breakfast, dessert, or any time of day. These cinnamon sugar biscuits are the perfect size for snacking!

These little cinnamon bites are the perfect breakfast dessert recipe. You know those days where you just crave something sweet in the mornings? Those days where donuts or dessert sound delicious any time of day? Those days where you want a sweet snack…but don’t want to bake all day to accomplish your dreams? These CRISPY SUGAR CINNAMON BISCUIT BITES are exactly what you need!

These Cinnamon Sugar Bites couldn’t be easier. We’re using premade dough of course (I’m the ROOKIE after all) to make this recipe super simple. Just a few minutes in the oven, dip ’em in a homemade cinnamon sugar recipe, and they’re done!

These crispy cinnamon biscuits couldn’t be more crave-worthy. Pop a couple in your mouth for breakfast, snack on them throughout the day, or heat some up and top with ice cream for the ultimate dessert after dinner. JUST TOO GOOD! I’m obsessed. These are perfect for Christmas breakfast too. Grab a handful and open those gifts!

These Crispy Cinnamon Sugar Biscuit Bites are so sweet and crave-worthy. Perfect for a sweet breakfast or a fun dessert! 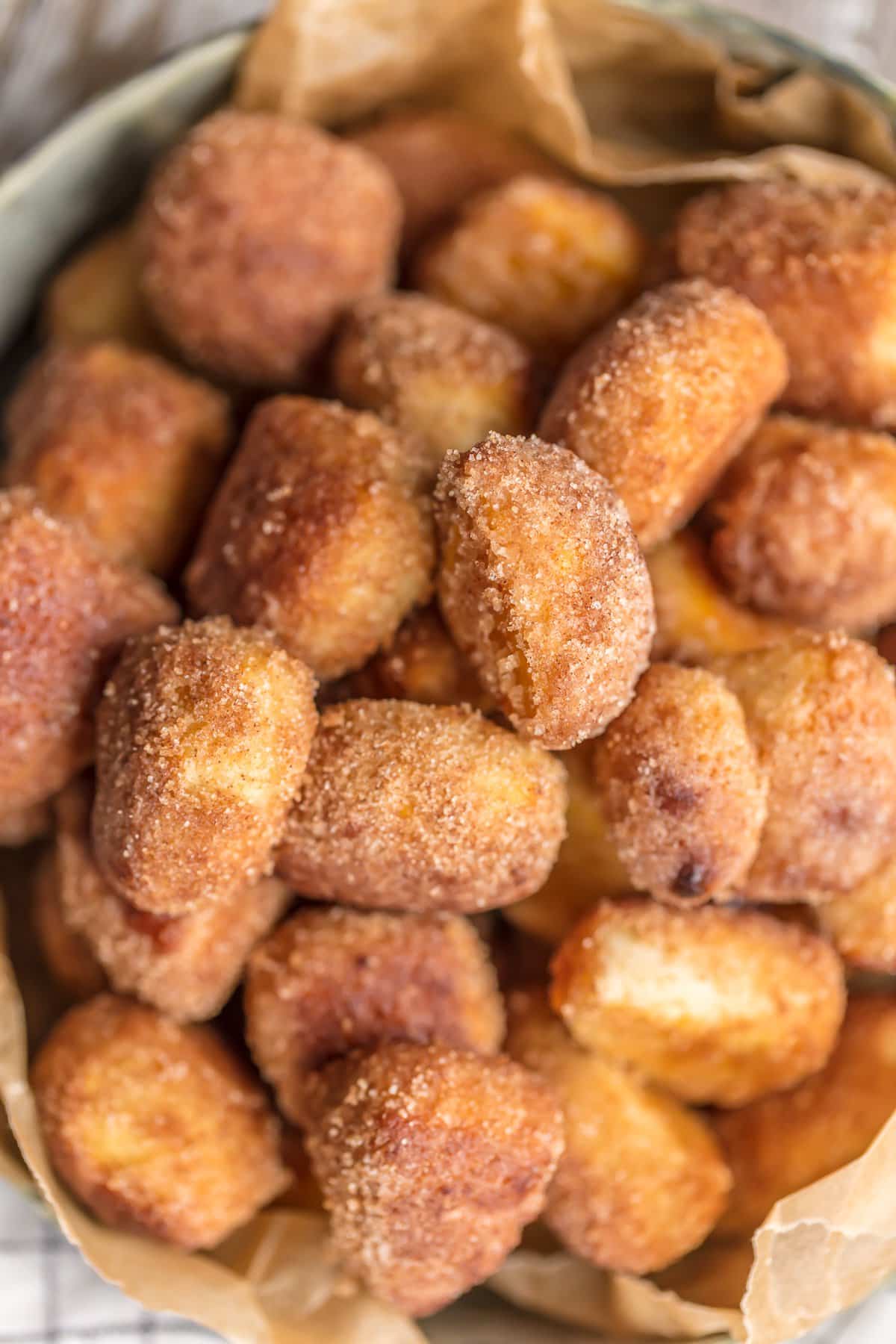 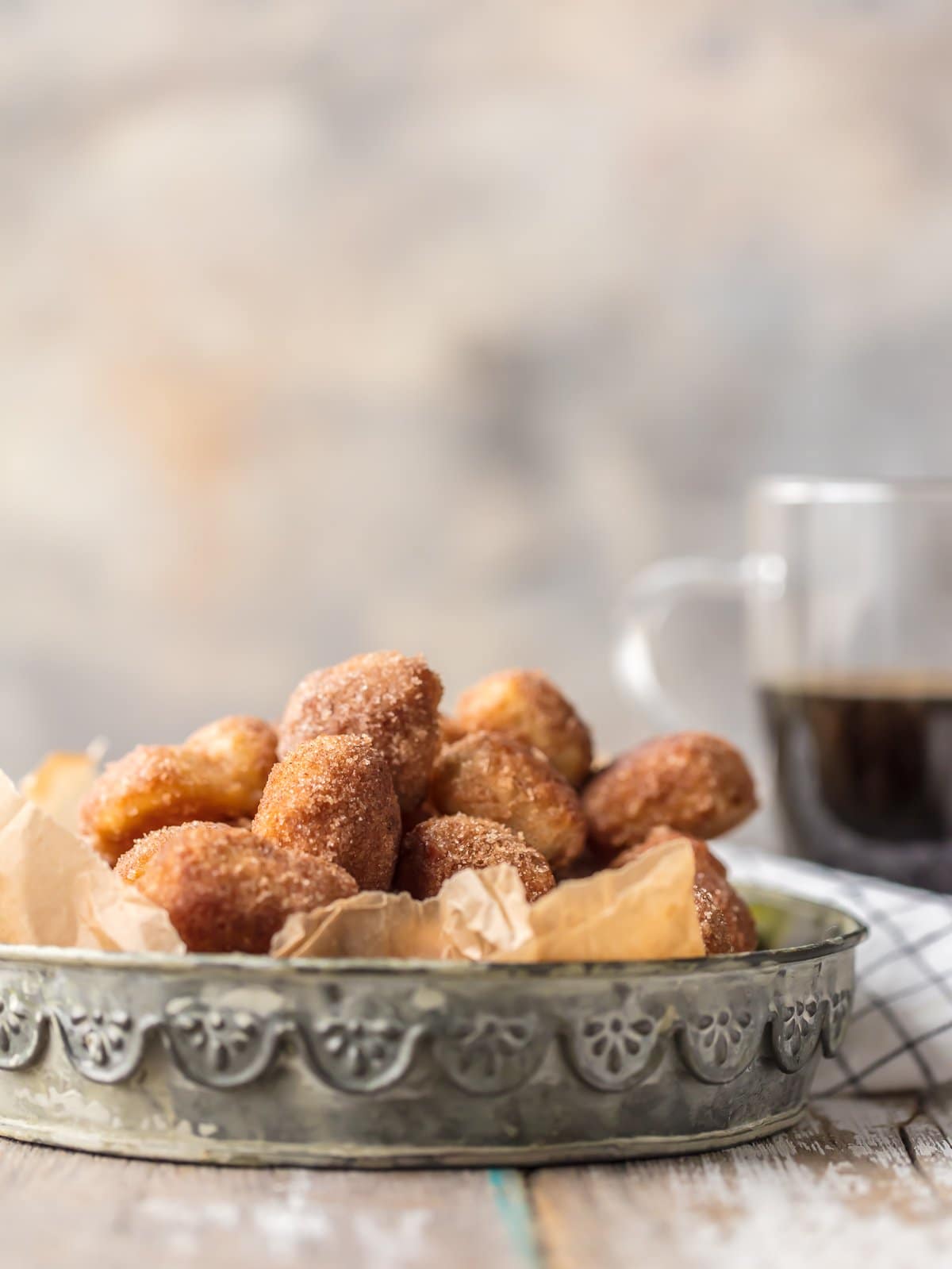 These Cinnamon Bites only have four ingredients. It’s as simple as cutting store-bought biscuit dough into fourths, baking, dipping in butter, cinnamon, and sugar, and then broiling until crispy and divine. I mean….right?! How could it be easier?

I have a feeling I’ll be making a fresh batch of these bite-sized cinnamon biscuits every single week from now on. They’re a lot like those fun Ranch Dip Biscuits I posted last week. Simple is always best in my book. No one needs to know you didn’t bake these sweet treats from scratch.

Any time I’m craving something sweet in the mornings, I go straight for these cinnamon sugar bites. My favorite way to eat these is to zap a plate of 3 or 4 bites for 10 seconds in the microwave, and then eat them while they’re nice and warm. A cup of coffee or glass of milk on the side takes them from great to AMAZING in just seconds.

They’re just the right size to eat a few, but not feel overwhelmed by the sweetness. Can you tell how much I love this breakfast dessert recipe? 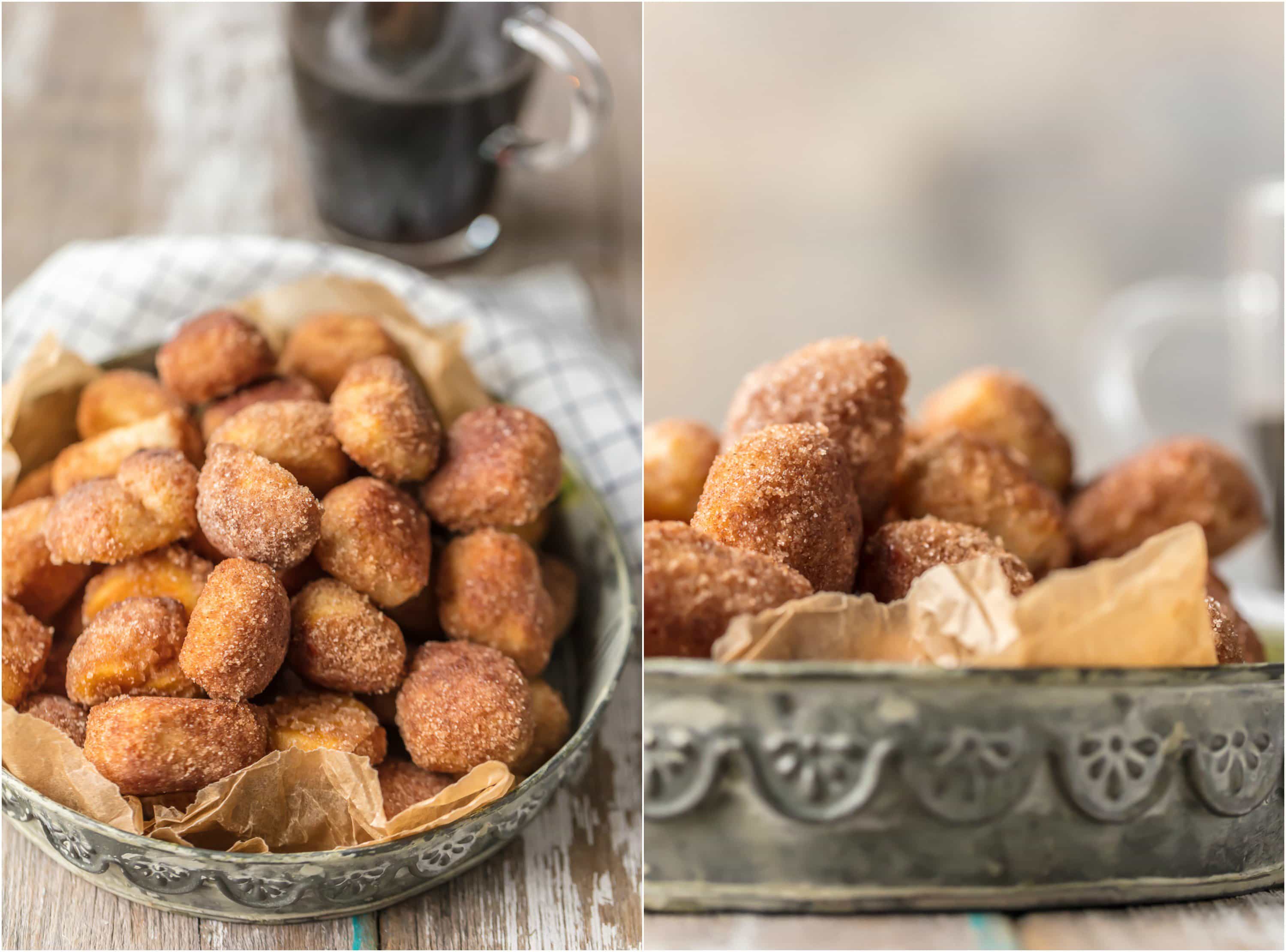 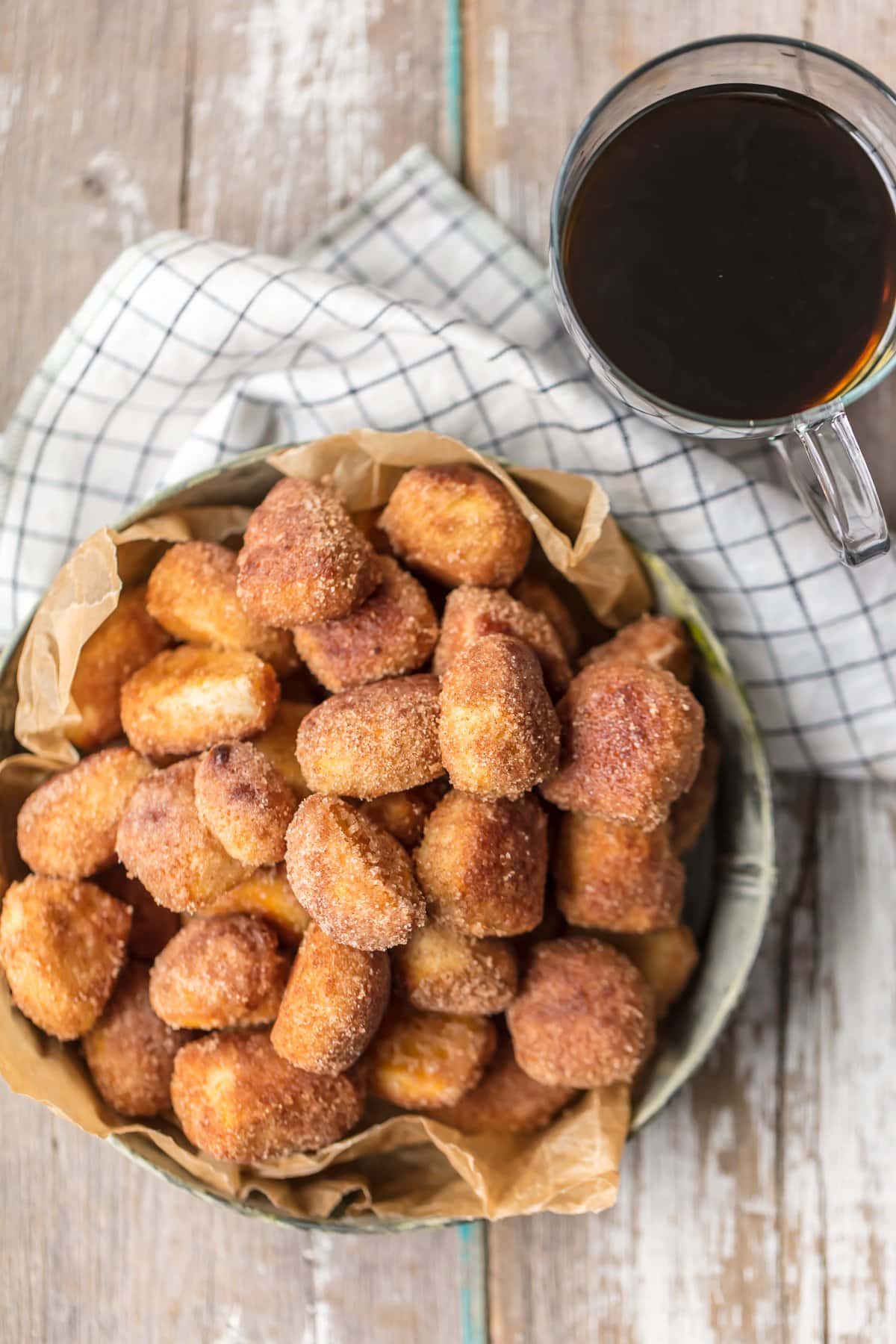 How to Make Cinnamon Sugar Bites

Like I said earlier, these Cinnamon Bites are really easy to make. Just 4 ingredients and 15-20 minutes of your time is all it takes to make a sweet and tasty breakfast, dessert, or snack!

How to make cinnamon bites:

These crispy cinnamon bites taste like sweet mini donuts and they are so good dipped in milk or coffee. It’s the perfect sweet breakfast or dessert! If you don’t eat them all at once, you can easily store them to eat later. Just put them in an airtight storage container and keep them in the pantry or somewhere at room temperature. They reheat really well! 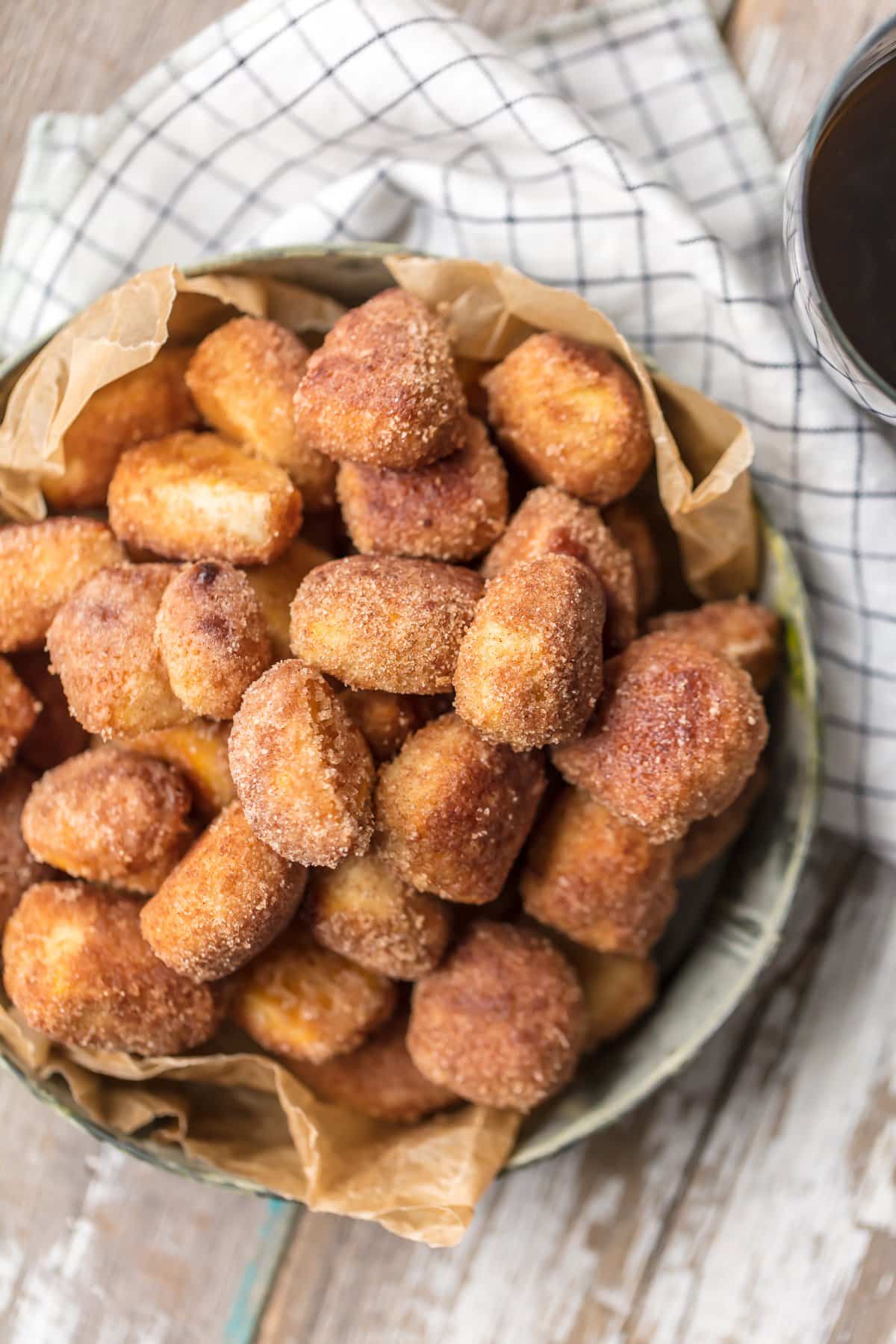 I hope you love these bite-sized cinnamon biscuits as much as we do! Everybody deserves a little bite of sweetness every single day. These Crispy Cinnamon Sugar Bites are the perfect way to start your day.

Watch the Video and See the recipe card for details on How to Make Cinnamon Sugar Biscuit Bites. Enjoy!

Try these other sweet breakfast treats too: 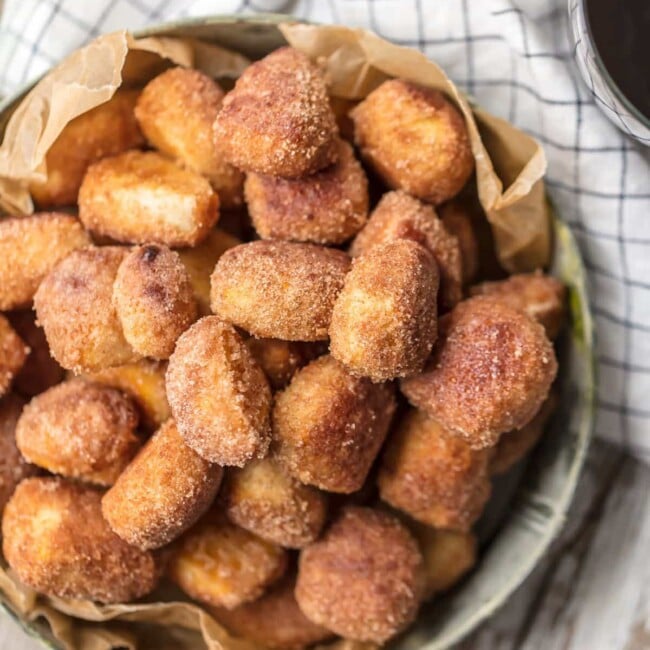 Serves8
Print Rate Save Saved!
CINNAMON BITES are the perfect breakfast, dessert, or snack for any time of day! These crispy Cinnamon Sugar Biscuit Bites are easy, delicious, and so fun.

Storage: Store crispy cinnamon sugar biscuit bites in an airtight container at room temperature for up to 2 days, in the refrigerator for up to 1 week, or in the freezer for up to 3 months. 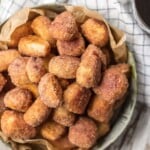 Love the recipe.. only issue I saw is that they were a lot of butter, cinnamon and sugar left over.. I would probably use half of the ingredients or maybe double dip the biscuits

Very yummy! I added a bit of cardamom with the cinnamon and sugar and it’s reminiscent of Finnish pulla

I’m sorry you didn’t enjoy this recipe, Faisal. It is indeed just 4 ingredients, though! One of them is canned biscuit dough, which you can find in the refrigerated section of the grocery store. I hope this helps!

Wow.. count to 4 is very easy. Ilove this recipe. I did make into ball shape. 👍

So good! I rolled mine to fit better on my baking sheet. Topped with strawberry and icing!

I added vanilla to the melted butter. SO delicious!!

Boyfriend loved them, although he preferred the non carmelized sides so I guess next time I won’t be broiling them…although I thought the carmelized bits were delicious, too!

Definitely modify to your liking!

This after i dipped them. 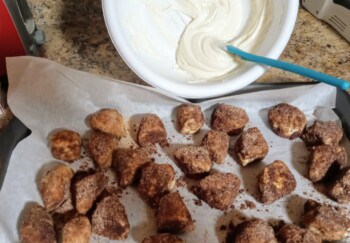 Do you have to broil them? My kids like them soft inside and out. Is it ok to use regular pizza/bread dough?

You can modify it to your liking!

Made these with some homemade mini biscuits (made my biscuit dough and cut into 1-1.5 inch cubes). Came out wonderful e

Thanks for sharing, Jeremy!