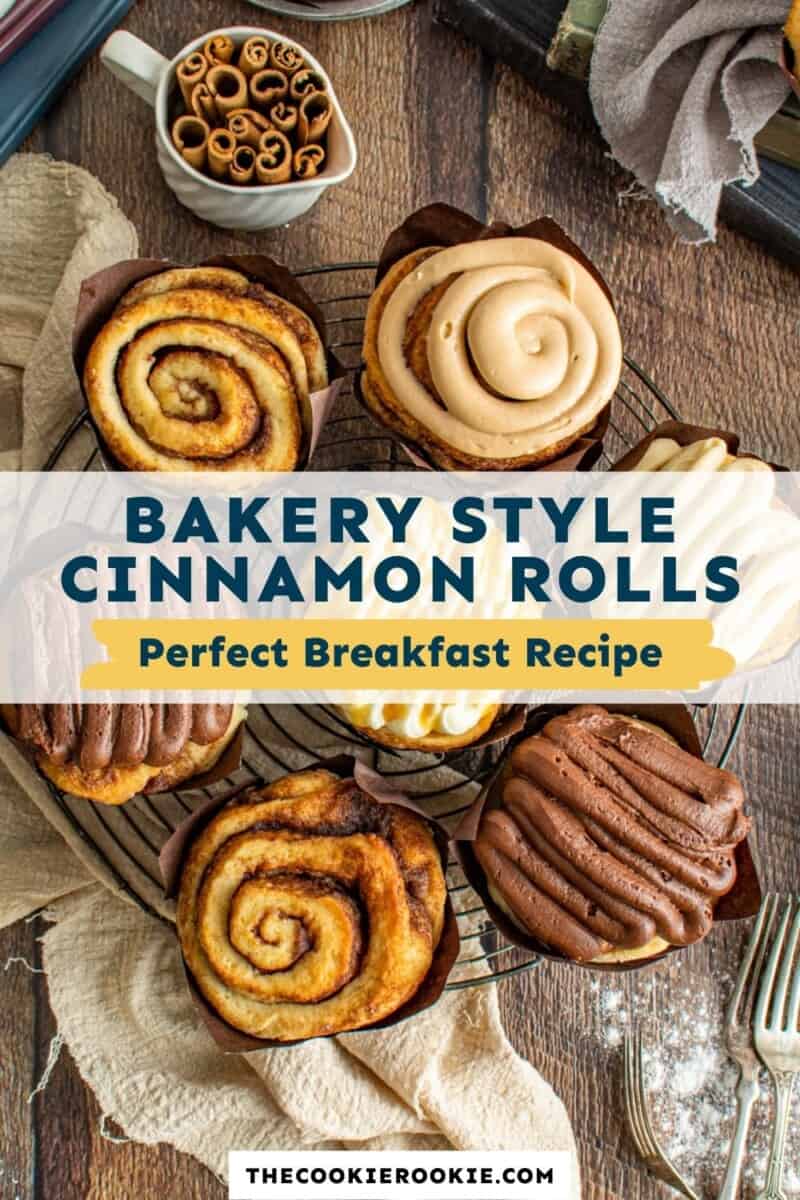 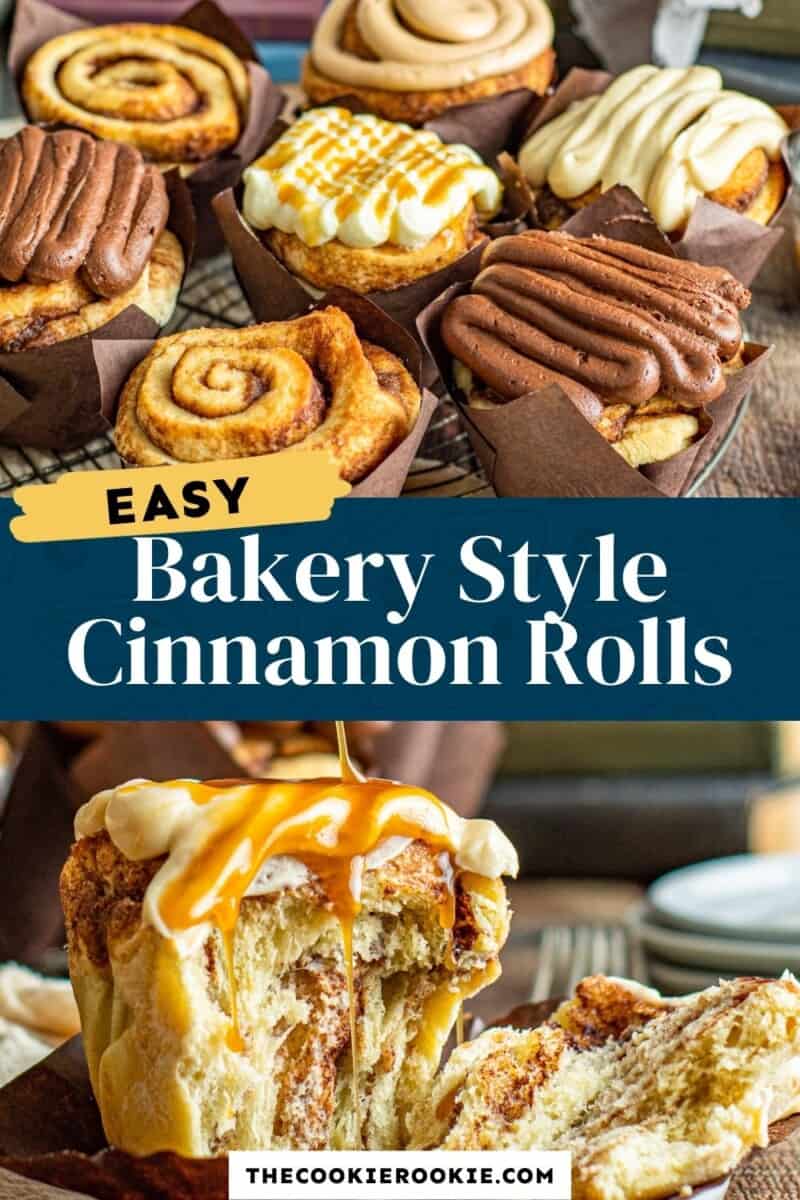 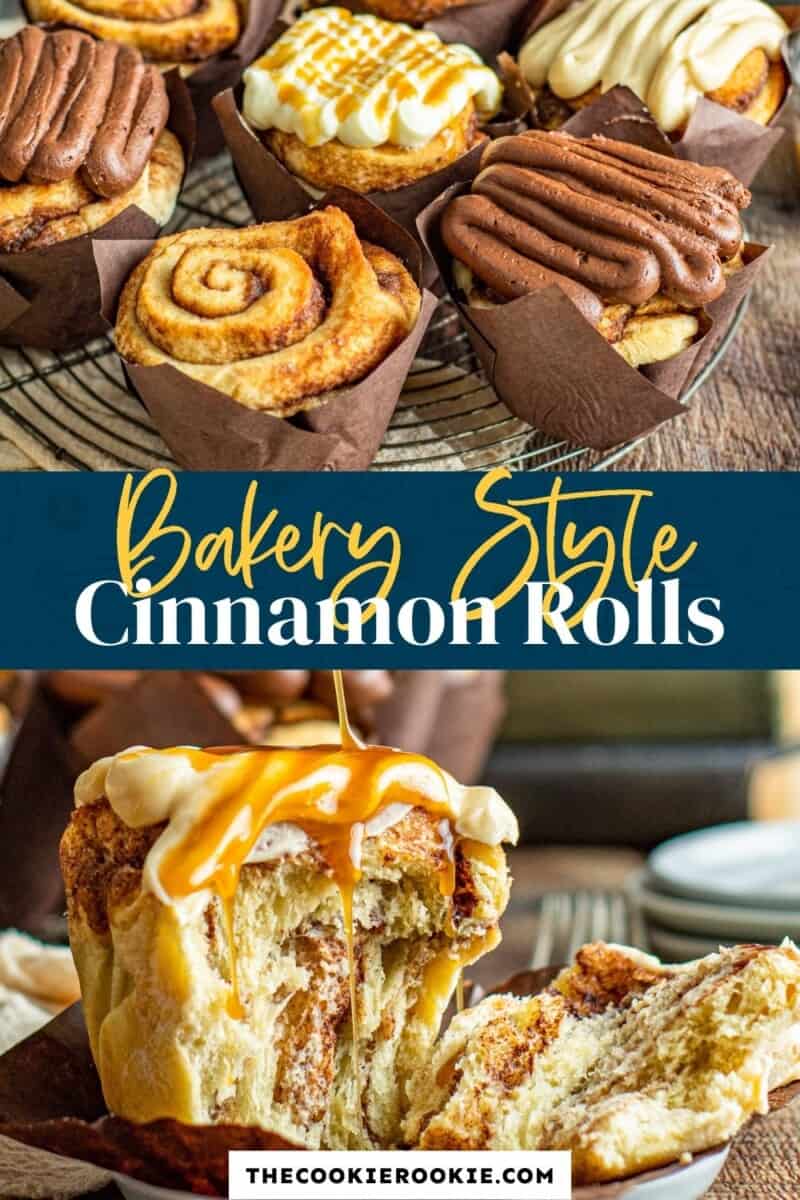 These Bakery Style Cinnamon Rolls are is delicious as they are gorgeous! Big, fluffy with a variety of spoon licking frostings. These are everything!

There is nothing quite like the sweet scent of homemade rolls baking in the oven. These deliciously spiced clouds of fluffiness are just divine and could adorn any bakery window. Perfect for a breakfast treat or any time treat! Kids will love them too!

Tall, fluffy rolls packed with cinnamon – you need to give these beauties a try!

How are these rolls different from homemade cinnamon rolls?

These bakery-style cinnamon rolls are baked individually in a jumbo muffin tin and topped with a variety of frostings. My classic cinnamon rolls bake in a casserole pan and are drizzled with a sweet vanilla icing. Both are equally delicious!

Why isn’t my yeast frothy?

If your yeast does not froth after standing for 5 minutes, it may be dead or the milk may have been too hot and killed the yeast. To test the temperature of the milk without a thermometer, stick a clean pinky finger halfway into the milk. If you are not able to leave your finger in the milk for at least 5-8 seconds, it is too hot and will kill the yeast.

What kind of flour should I use for cinnamon rolls?

Can I make these cinnamon rolls dairy-free?

While I haven’t tested a dairy-free version of this cinnamon rolls recipe, you could certainly try replacing the milk, butter, and cream cheese with equal amounts of dairy-free alternatives like almond milk and Miyoko’s butter and brick-style cream cheese.

This dough can be prepared up to a day in advance. To make this bakery style cinnamon roll dough ahead of time, make the dough through step 6. Cover the bowl of dough tightly with plastic wrap and refrigerate overnight until fully risen, about 8-10 hours. When ready to assemble and bake, remove the dough from the refrigerator and let it come to room temperature for 10 minutes. This will make the dough easier to roll. Continue with the recipe as written.

Store leftover cinnamon rolls in an airtight container in the refrigerator for up to 3 days.

These cinnamon rolls freeze beautifully! For best results, individually wrap unfrosted rolls in plastic wrap and place into an airtight container. Freeze for up to 3 months. Thaw in the refrigerator and heat before icing and serving.

These bakery style cinnamon rolls tick all the bakery boxes! Fluffy, tall, packed with cinnamon and frosted with delectable toppings. They’re great for breakfast, coffee mornings, bake sales or just as a treat after a busy week!

Serves12 rolls
Print Rate Save Saved!
These Bakery Style Cinnamon Rolls are is delicious as they are gorgeous! Big, fluffy with a variety of spoon licking frostings. These are everything!

To Assemble the Rolls

Storage: Store cinnamon rolls in an airtight container in the refrigerator for up to 3 days or in the freezer for up to 3 months.

I found that you really need the tulip liners for these huge buns. I’ll know better next time. The dough was awesome to work with. Tender buns!

Thanks for sharing, Mary!

I just saw this recipe this morning and made them this afternoon. Couple of things: in the ingredients list there is 1/3 cup sugar but the instructions ask you to add 1/3 cup sugar twice…I did. We’ll see how that tastes. Also, the frosting is double the amount needed so I halved that recipe and had more than enough and I didn’t need a pastry bag. It went on with a butter knife and looks beautiful!