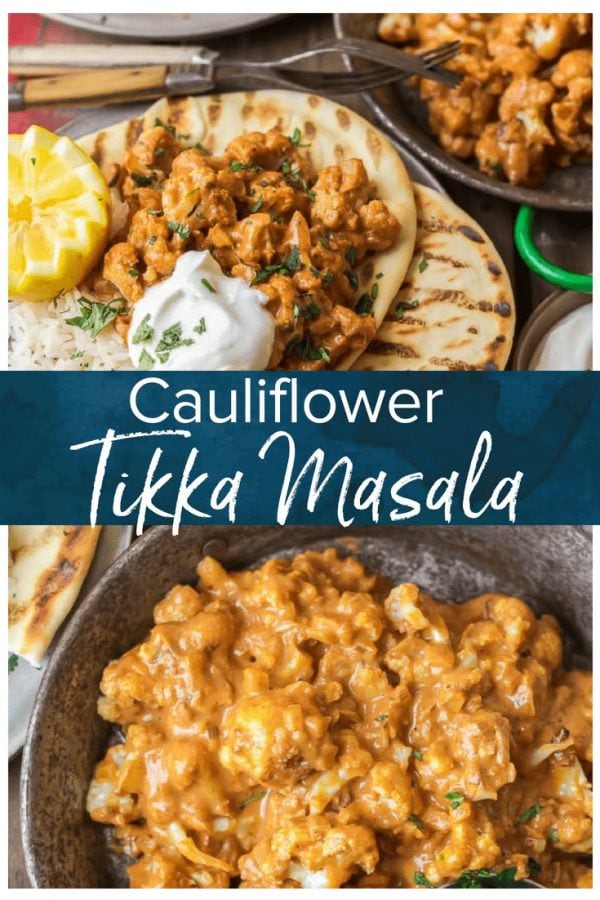 This Vegetarian Tikka Masala is made with cauliflower instead of chicken! This delicious Indian cauliflower recipe is perfect for vegetarians, but it’s also great for usual meat-eaters. The texture of the cauliflower masala (or Gobi Masala) is perfect, and the flavor of the homemade tikka masala sauce is absolutely delicious! Serve it on basmati rice with naan to complete the dish. 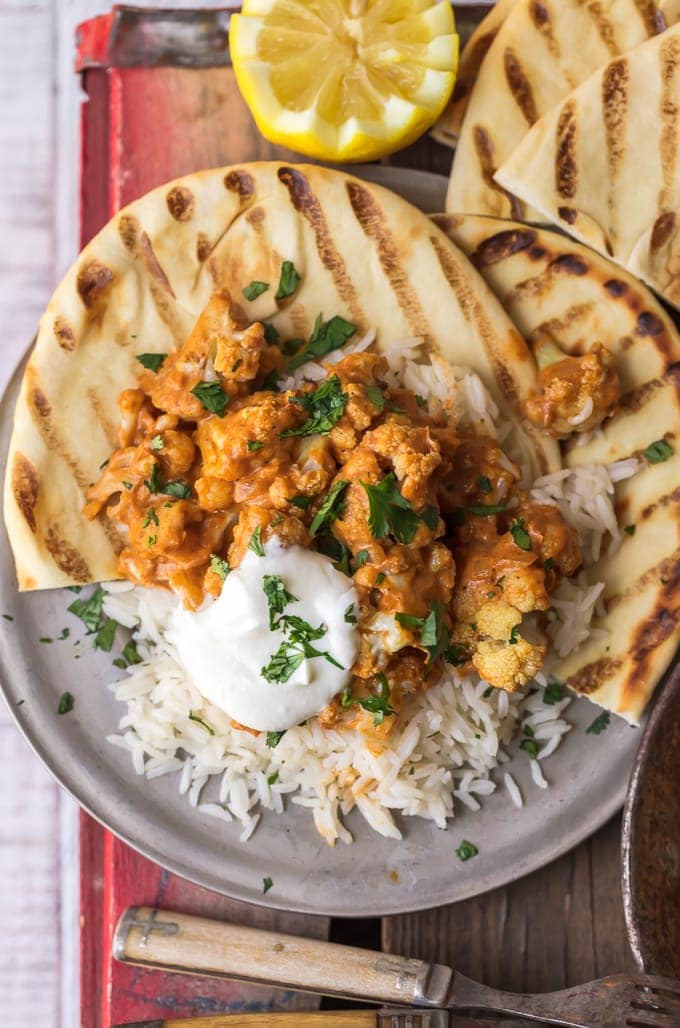 Vegetarian Tikka Masala (cauliflower or gobi masala) is the perfect Indian dish for vegetarians and meat-eaters alike. There’s so much flavor in this Indian cauliflower recipe!

Cauliflower Tikka Masala is such an amazing dish. It’s pieces of roasted cauliflower mixed into a tomato-based curry, served with basmati rice and naan bread. YUM!

This Indian cauliflower recipe is a great meat replacement with all of the flavor and texture you would expect from chicken tikka masala. I made my own homemade tikka masala sauce with the perfect level of spice to cover the roasted cauliflower. And it is GOOD if I do say so myself. Indian food is such a fun thing to make (and to eat), and this dish makes for a tasty, healthy dinner.

Whether you eat meat or not, you have to try this vegetarian tikka masala recipe (aka Gobi Masala, aka Cauliflower Tikka Masala). Whatever you call it, it is absolutely delicious!

Vegetarian Tikka Masala made with cauliflower is a super rich and flavorful vegetarian Indian dish you’re sure to love! 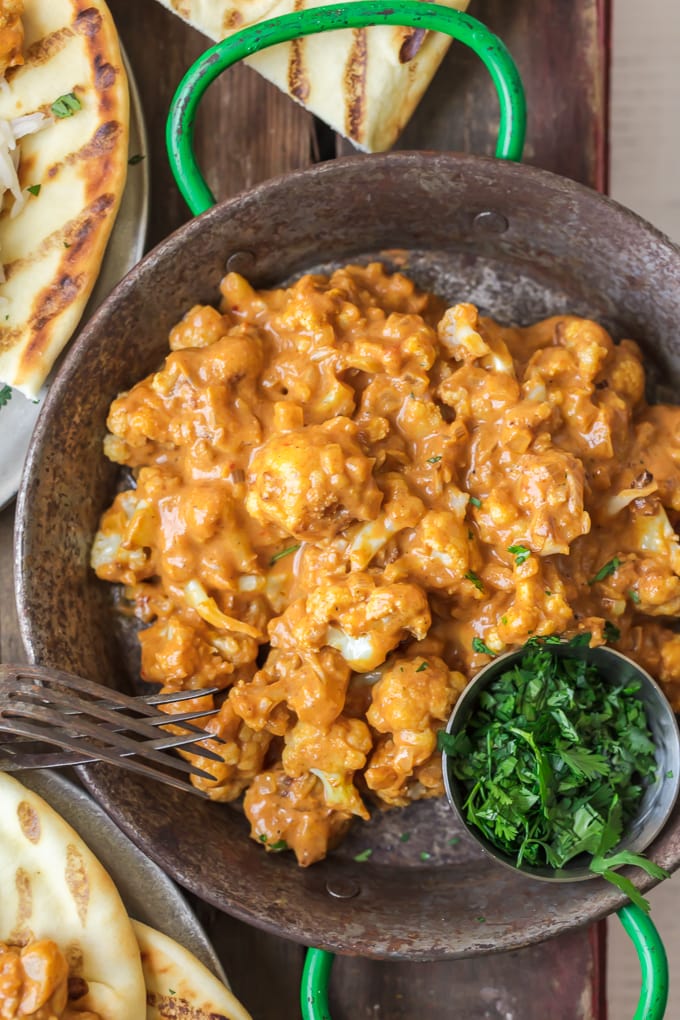 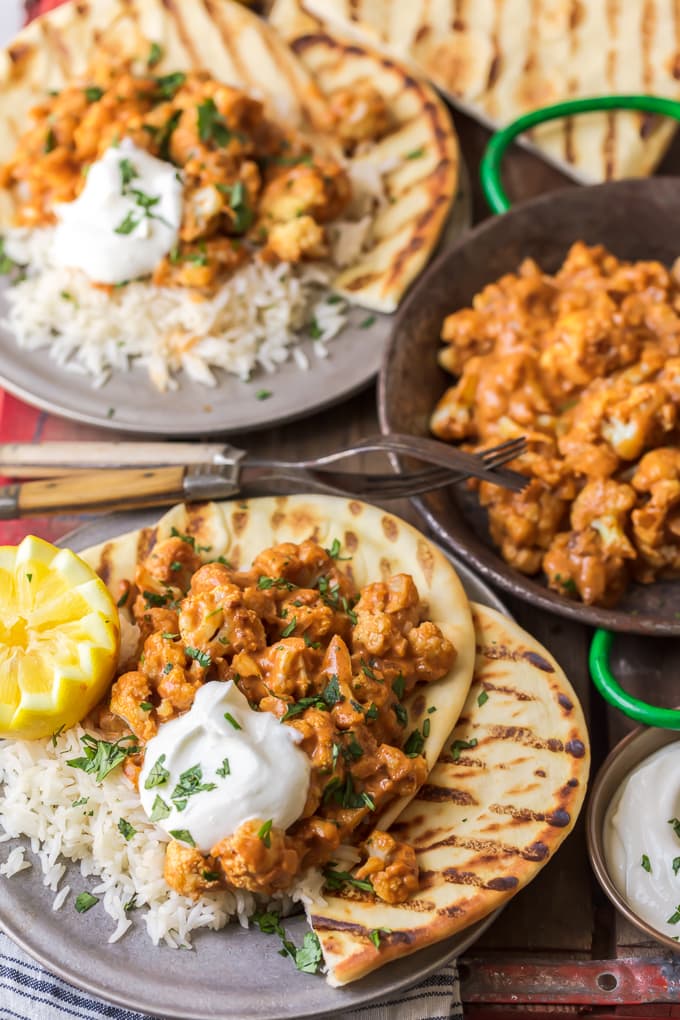 Chicken is the most well-known version of this dish, but it can be made with vegetables instead. Cauliflower is used in this vegetarian tikka masala recipe as a substitute for meat. Since there is no meat, a more accurate name would be cauliflower masala, or Gobi Masala as it would be called in India.

This Indian cauliflower recipe is cooked in a tomato-based curry sauce, and served with basmati rice and naan bread. It’s so flavorful and the texture of the cauliflower is just perfect. This cauliflower tikka masala is great for vegetarians, but it’s also just as good for usual meat-eaters. You won’t miss the chicken with this texture and taste! 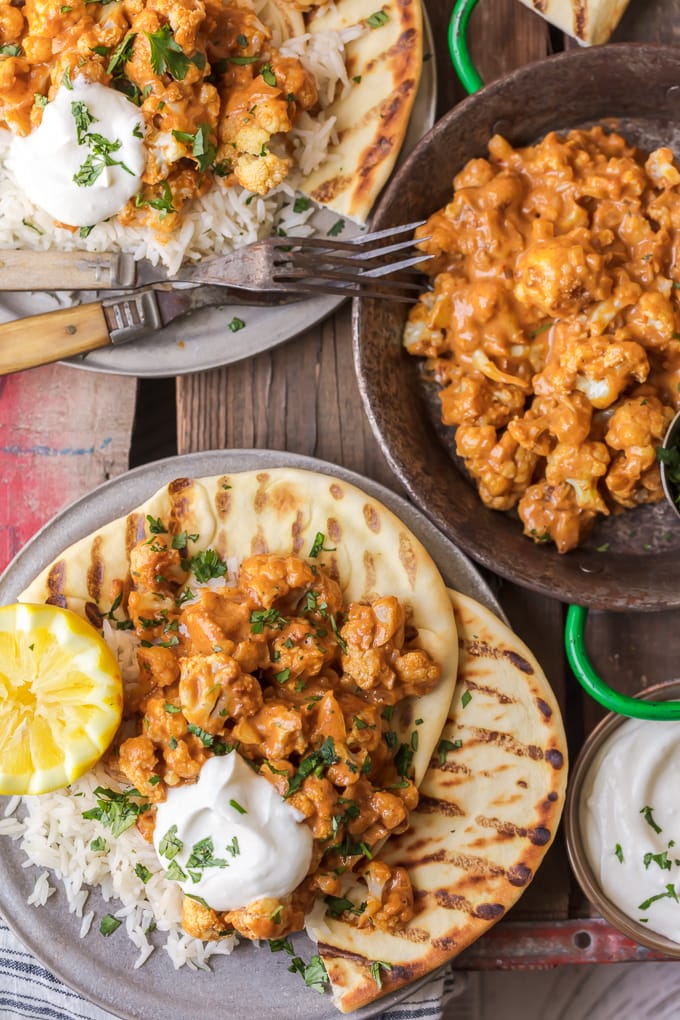 How to Make Tikka Masala Sauce

Masala is a tomato-based curry sauce used in many Indian dishes, but it’s probably most known for being used in tikka masala here in the U.S. There isn’t a standard tikka masala sauce recipe, as it can vary drastically and still be considered masala. But I am very happy with the recipe I created for this vegetarian tikka masala. You could use this same sauce recipe to make with chicken instead.

It’s a wonderfully spicy, flavorful sauce. I’m kind of obsessed with it! It tastes so good in this Indian cauliflower recipe (gobi masala). 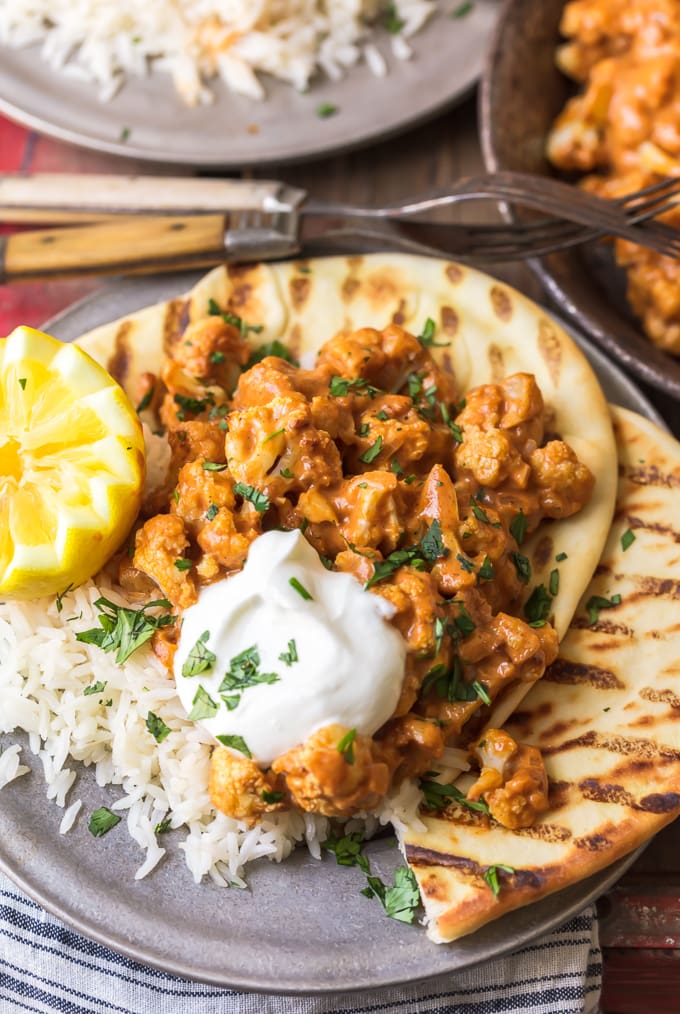 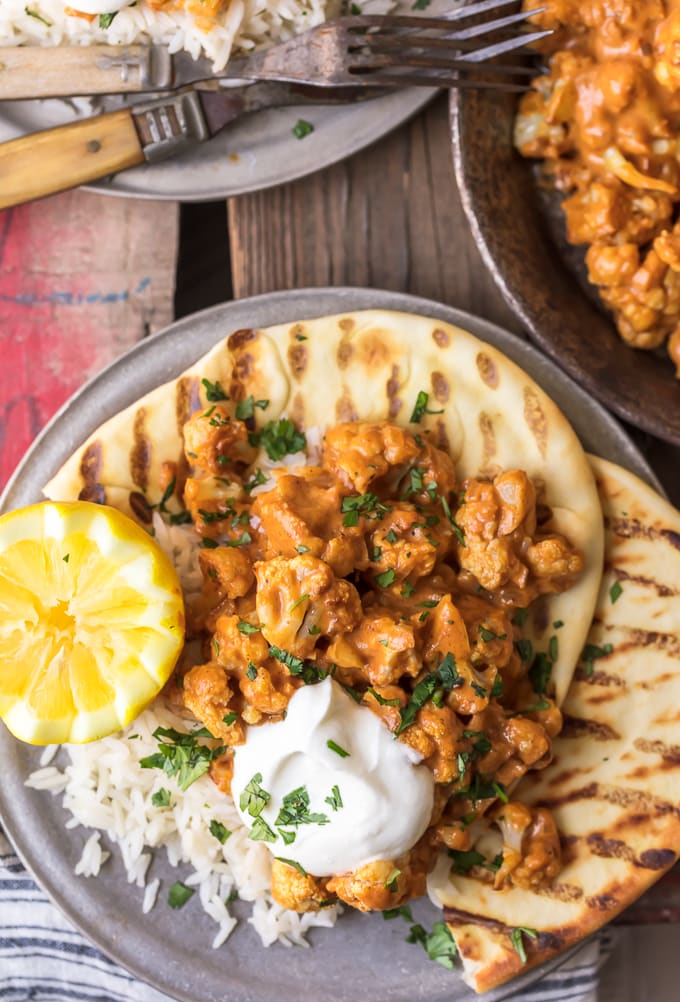 What does tikka masala mean?

Tikka refers to pieces of meat, while masala refers to the curry sauce. More literally, masala just means a mixture of spices, but in this case it is referring to the sauce portion of the dish. So Chicken Tikka Masala is pieces of chicken in a curry sauce. However, in this recipe there is no meat, just pieces of cauliflower.

What spices are in Garam masala?

Garam masala is a mixture of spices intended to heat or warm the body. This spice blend varies depending on where you buy it, but you can expect it to include all or some of the following spices: 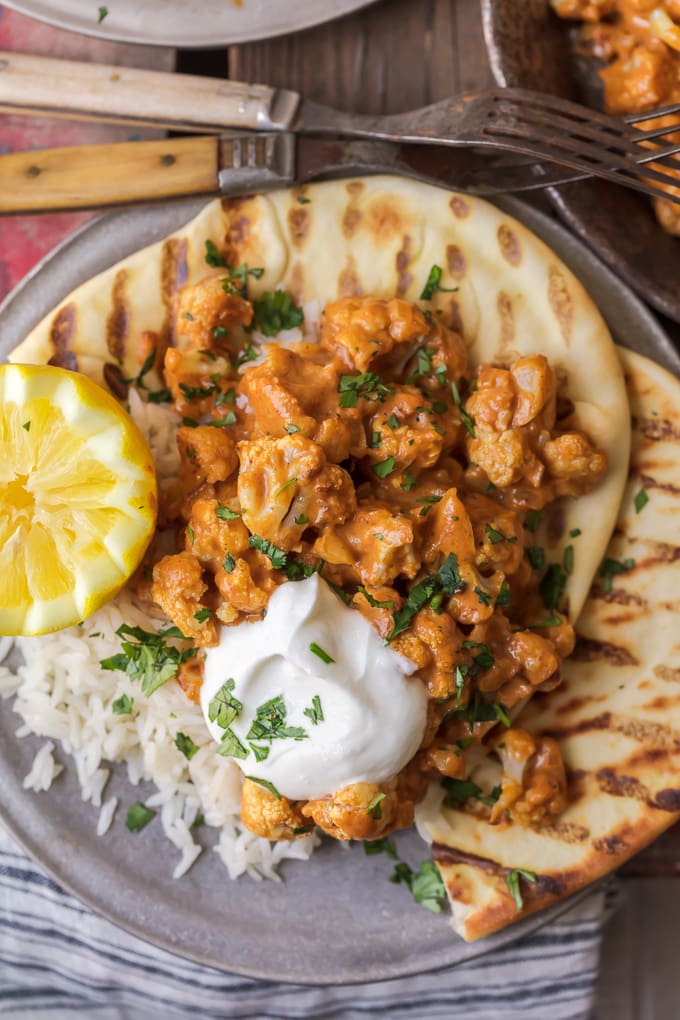 This vegetarian cauliflower tikka masala is going to blow you away! The spicy curry sauce, roasted cauliflower, and basmati rice make one delicious dinner that everyone will love. If you need a little something extra to serve alongside it, try our favorite naan rolls.

See the recipe card below for details on how to make Vegetarian Tikka Masala. Enjoy!

If you like this recipe, you’ll love these recipes too: 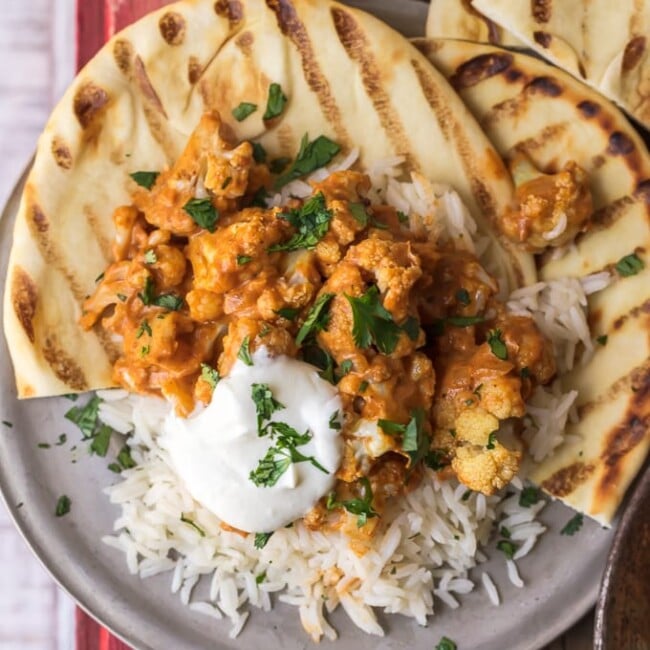 Serves6
Print Rate Save Saved!
This Vegetarian Tikka Masala is made with cauliflower instead of chicken! This delicious Indian cauliflower recipe is perfect for vegetarians, but it's also great for usual meat-eaters. The texture of the cauliflower masala (or Gobi Masala) is perfect, and the flavor of the homemade tikka masala sauce is absolutely delicious! Serve it on basmati rice with naan to complete the dish.

For the Basmati Rice: 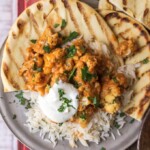 Loved this recipe, very easy and tasty..used tomato puree, not sure if this was correct. Left overs made great veggie pies…

I think tomato puree would work just fine! Glad you enjoyed it!!

Have to admit I only followed the recipe exactly for the cauliflower part, so that’s what the 5 stars are about – plus the way it turned out overall. You see, I had a jar of Tikka Paste and o clue how to use it until this. Your recipe gave me enough info that I could adapt b using the tikka paste in place of the spices (masala?) and the final dish was delicious.
Back to the cauliflower: it was soooo good just out of the oven, I had to put it back in there, out of sight, or there wouldn’t have been any left for the sauce. Going to keep that part of the recipe close by for next time. Might use it on Brussels sprouts & some others as well.
And then about substitutions: no cream here & I don’t do dairy anyway so just used unsweetened soy milk and it was fine to our American palates. Also already had a part can of diced tomatoes in the fridge so they filled in for the sauce. And per my usual, I ignored the sugar. To me – since reforming us away from it – most dishes are spoiled by the sweet taste; it actually detracts from the flavor and composition of most foods.
Thank you for a wonderful cauliflower recipe and an easy way to get a hit of Indian flavor on a busy schedule.

Glad you enjoyed it, Renee!

It’s best when it’s fresh but you can!

My only recommendation is to double the sauce because it is so amazing! This has been added to our regular rotation.

Thanks for sharing, Karen!

Thanks for stopping by!

Need to amend my review. I added 7 oz. tomato sauce, not 1/2 of a can, as directed. Misread the recipe. However, it was divine. I would make it the same way again.

Do not make this. Spices are off. Has a weird taste. Not like any I’ve ever made. One word. Yuck

I am sorry to hear it wasn’t up to your taste, David.

This looks really good but are the sauce proportions right? 3 -3.5 ounces of tomato sauce and half a cup of cream for 6 people?? Just seems off…

You can adjust the portions in the recipe card to your ideal size!

Love this recipe. Easy and delicious.

Thanks for stopping by, Jen!