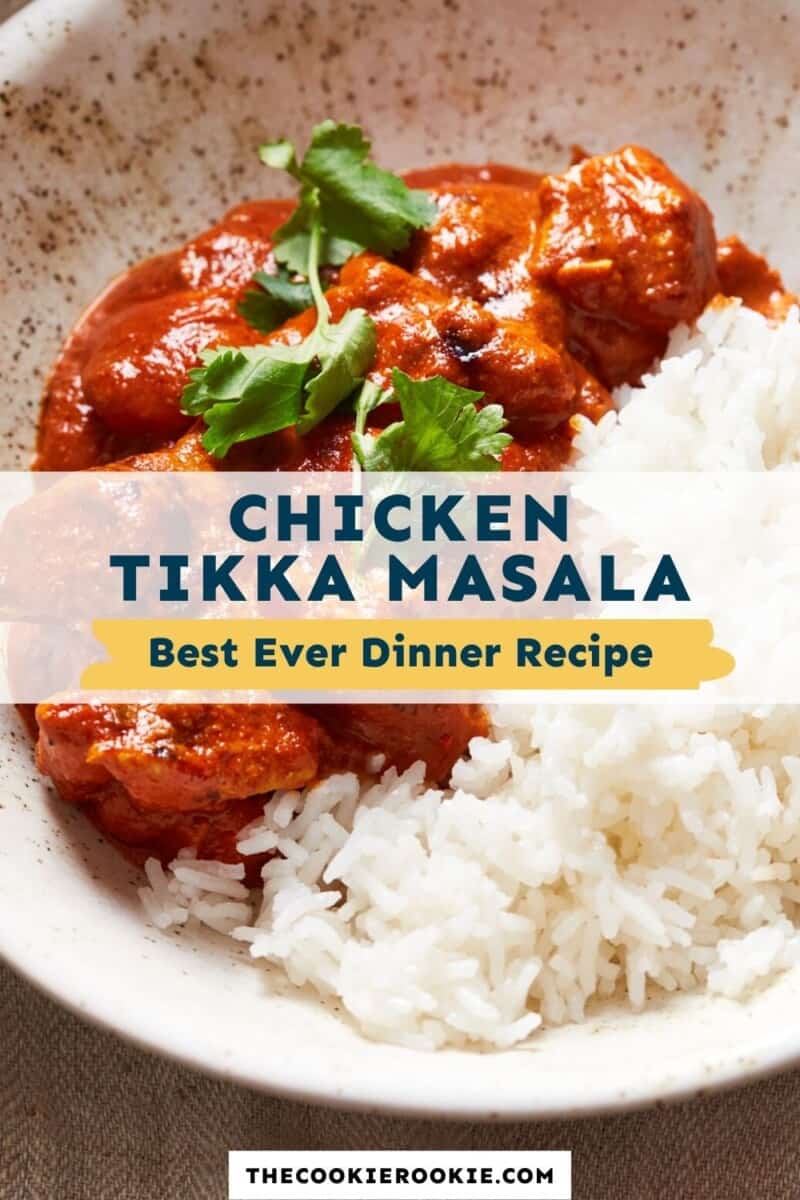 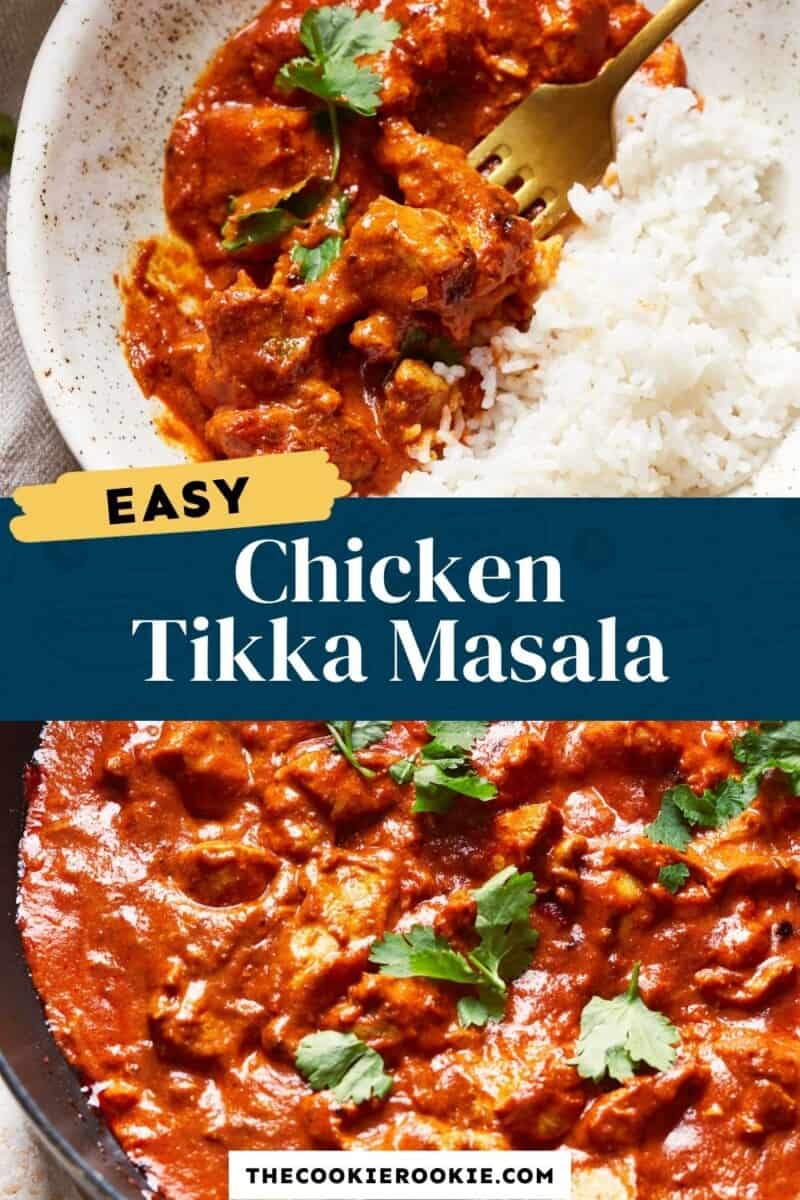 Chicken tikka masala is a classic Indian take out dish that you can easily make at home! Chicken is marinated in a spiced yogurt mixture, so it’s tender and juicy. Then it’s smothered in a creamy, comforting, flavor-packed curry sauce. This easy chicken tikka masala recipe is a weeknight staple!

This easy chicken tikka masala recipe goes toe-to-toe with the best take out! Make your favorite chicken curry at home for a flavorful weeknight dinner.

Chicken is marinated in yogurt, then cooked to perfection in a spicy and creamy tikka masala sauce. It’s surprisingly quick to make at home!

Serve this chicken tikka masala over rice for an easy meal. Add some veggies or naan bread on the side, and it will be complete!

If you want the flavors of this recipe in an easy game day appetizer, try these Baked Chicken Tikka Masala Wings or these Curry Chicken Meatballs!

What is tikka masala?

Tikka masala is a curry dish. It’s made with tomatoes, heavy cream, and lots of spices. This is an Indian-inspired dish, which is then cooked along with some form of meat/protein/etc. In this case, we made chicken tikka masala, which is chicken in a spiced curry sauce. Yum!

Be sure to check the recipe card for the full ingredients list for this homemade chicken tikka masala recipe!

How To Make Chicken Tikka Masala

This recipe is mainly chicken, tomatoes, and lots of spices, which makes it a decently healthy dish to make for dinner. There is some cream and sugar in the sauce, and the chicken is cooked in vegetable oil. But making homemade chicken tikka masala is definitely healthier than a takeout version.

Can I make this in a slow cooker?

If you prefer to make tikka masala in a crock pot, add all ingredients (except the cream) to the pot, and cook on LOW for 8 hours. Stir in the cream at the end until warmed and fully combined into the sauce.

What is garam masala?

Is tikka masala a curry?

Yes, tikka masala is a curry sauce. This is a tomato-based curry, filled with lots of spices.

This sauce is filled with spices like ginger, cumin, and more. So yes, it is mildly spicy. But it’s more like an aromatic, full-flavored “spicy”, rather than a hot kind of “spicy”. It’s definitely warming, but it won’t set your mouth on fire.

Of course, this all depends on your tolerance level of spice, and you can make it more or less spicy as desired. Feel free to throw in some sweat inducing chilis if you like it hot!

Can you freeze chicken tikka masala?

The best way to freeze chicken tikka masala is to separate the sauce and the chicken. The sauce can be frozen, but it’s best to cook the chicken when you’re ready to serve it. Chicken breast can be frozen too, so you can definitely keep some in the freezer for later.

When ready to serve: Thaw the tikka masala sauce in the fridge overnight, or in warm water. Prepare the chicken as directed, then add it to the thawed sauce, and let both simmer for 15-20 minutes on the stove.

Tip: The sauce is actually a really great thing to make and freeze for future meals. So consider doubling the sauce recipe, and freezing lots of it to use as needed.

This homemade chicken tikka masala recipe is best served over rice. I recommend using basmati or jasmine, or make coconut rice! The best way to finish off this dish is to serve it with fresh naan to help scoop up the extra sauce. You could also make these easy naan rolls to go with it!

If you want to add some veggies or side dishes, try these recipes.

This chicken tikka masala is just so creamy, tender, and flavorful. I absolutely love how rich the spices are, and this recipe is super easy to make at home. Make it for a casual date night, or for any weeknight dinner! 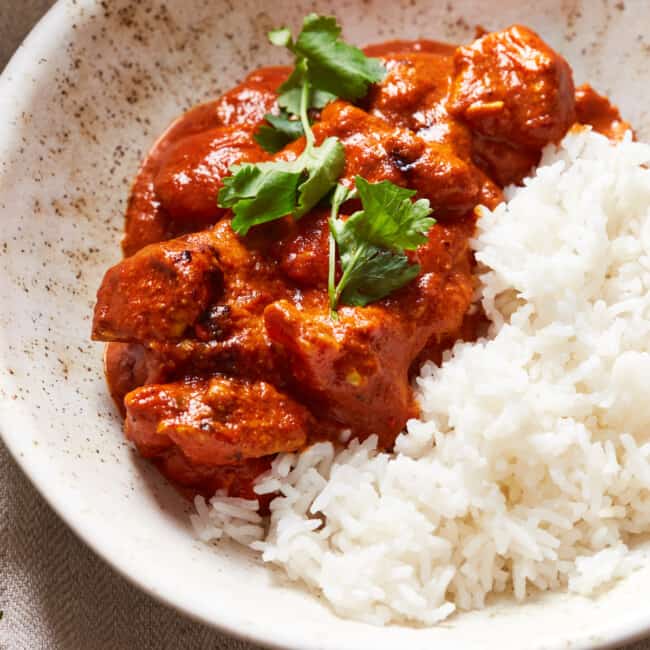 Serves4 people
Print Rate Save Saved!
Chicken quickly marinated  in a spiced yogurt mixture, so it's tender and juicy. Then, it's smothered in a creamy, comforting, flavor-packed curry sauce. Make this Easy Chicken Tikka Masala a weeknight staple!

Sign Me Up
0 Comments
Inline Feedbacks
View all comments