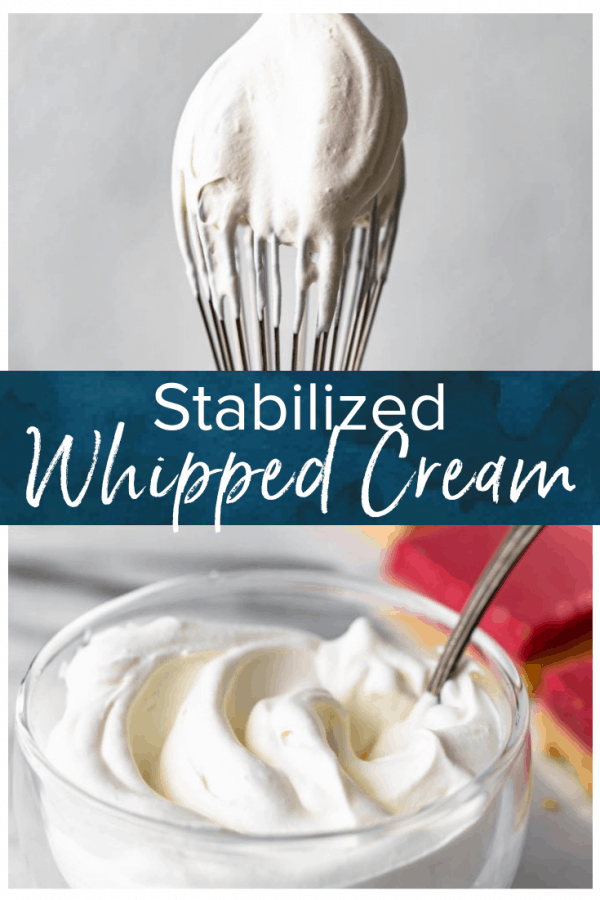 Stabilized Whipped Cream comes in handy when making desserts, and it’s actually really easy to make! Use this Homemade Cool Whip as replacement for the store-bought whipped topping. Read on to learn how to stabilize whipped cream! 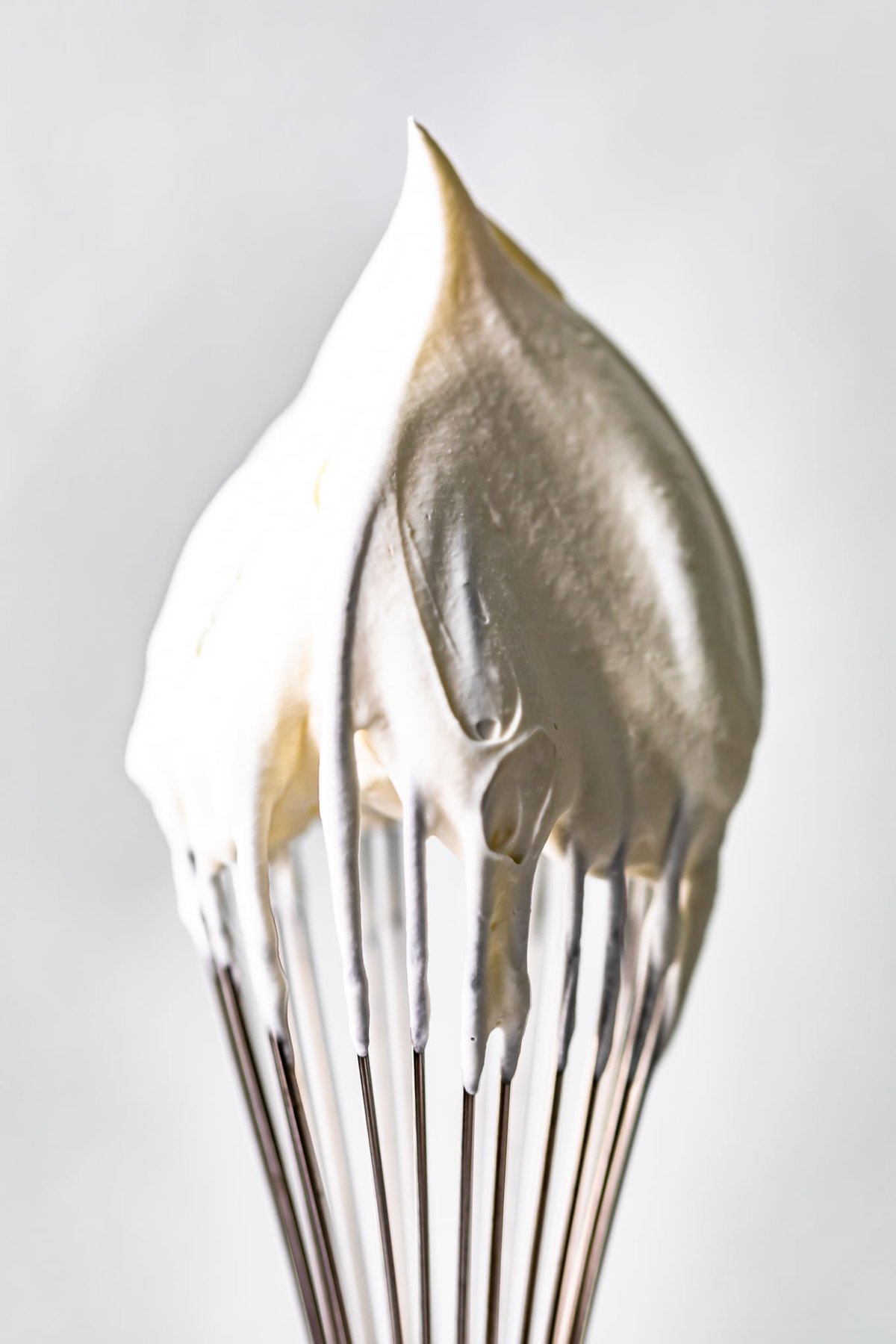 What’s the one thing that makes just about every dessert a little bit better? Whipped cream! It’s the perfect topping and a nice final touch for basically any dessert you make.

Homemade whipped cream is great, but you might run into an issue if you make it ahead of time: it tends to deflate and get watery pretty quickly. But this stabilized whipped cream recipe solves that problem! It will stay fluffy and beautiful and delicious, so you can make it in advance and have it ready for your desserts. This also make a nice Homemade Cool Whip, for the perfect fluffy topping!

Pies, dessert bars, cakes…everything could use a little bit (or a lot) of this stuff! So don’t be stingy with it, just throw that whipped topping on everything!

Learn how to stabilize whipped cream and make this easy whipped topping for all your desserts! 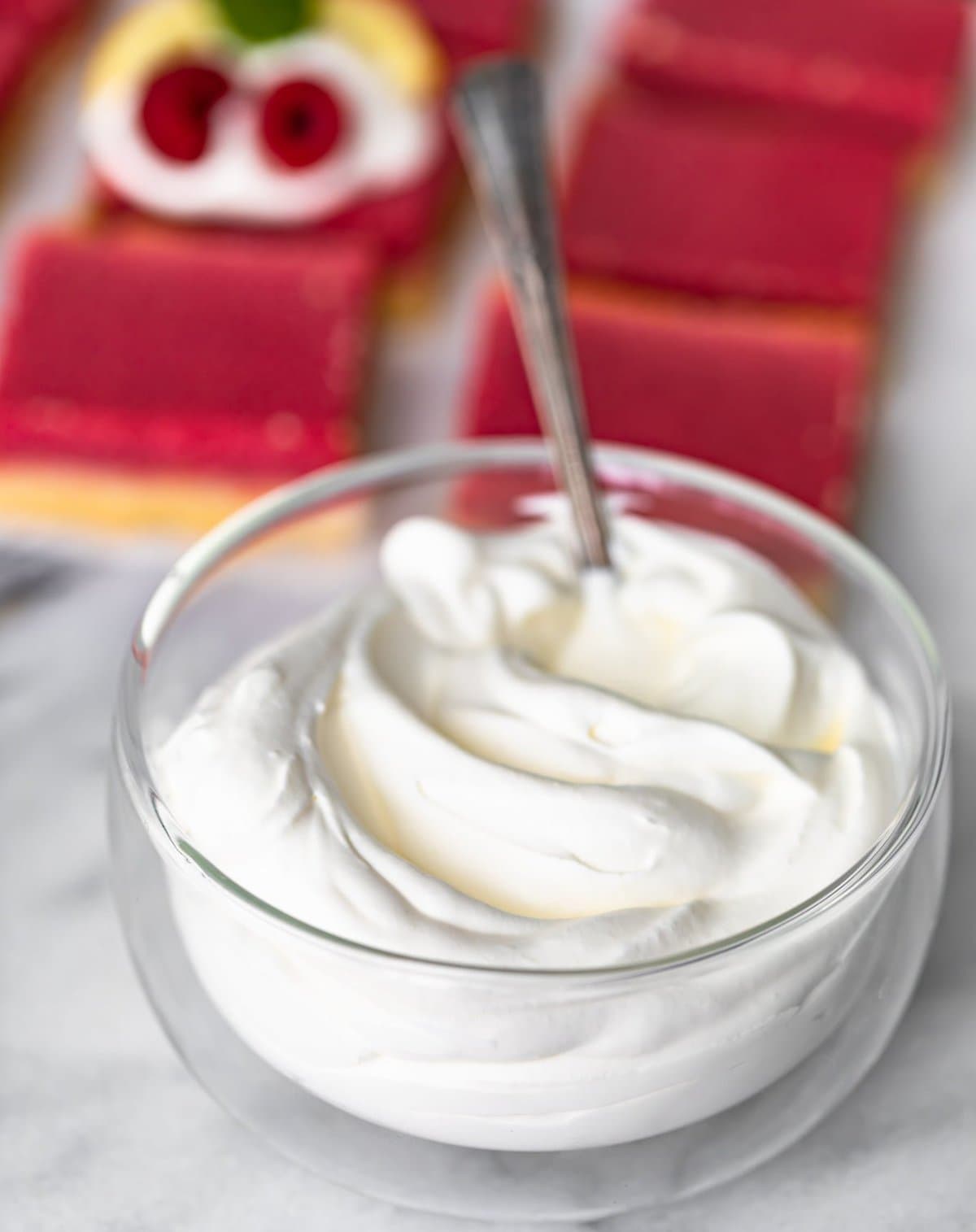 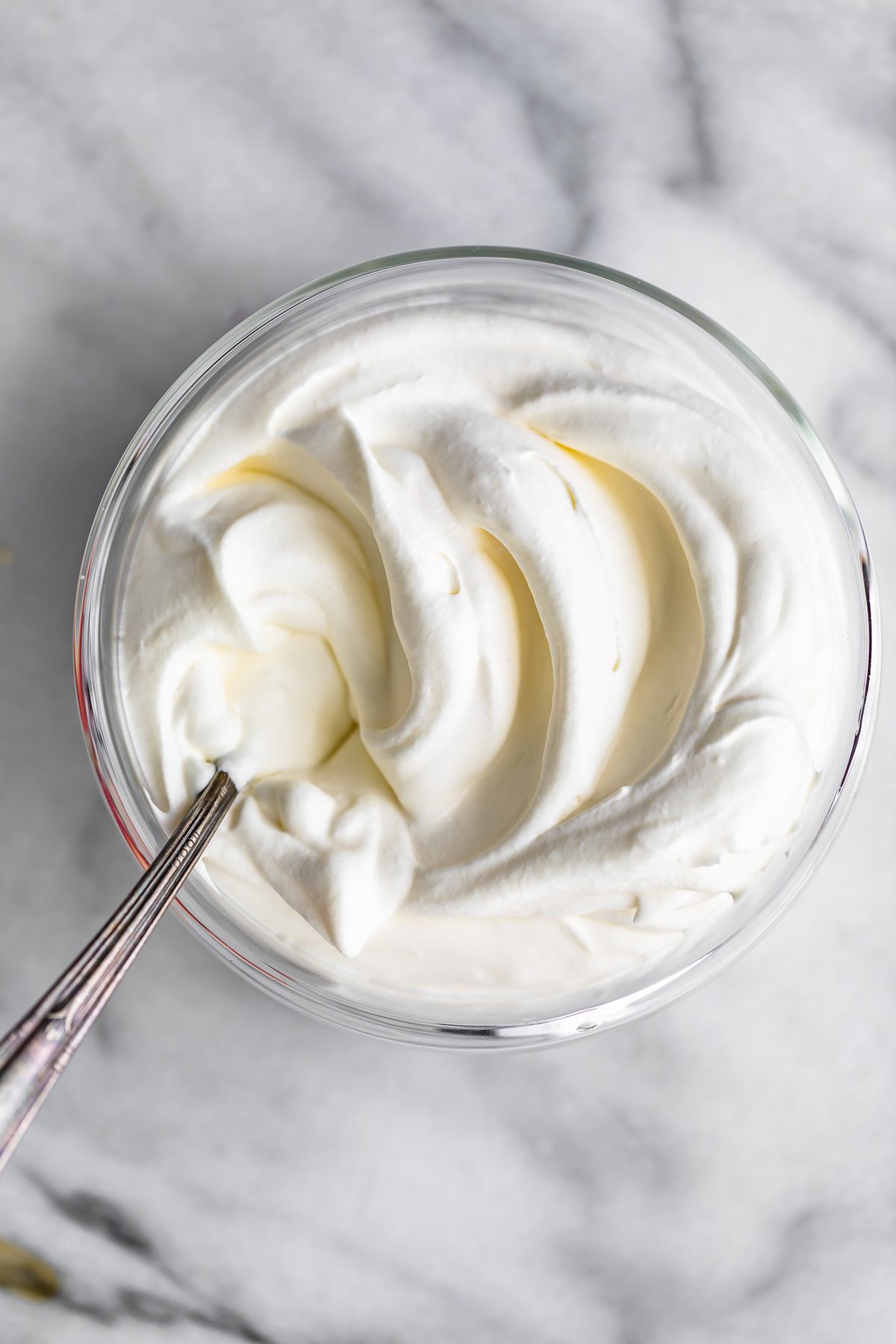 This easy stabilized whipped cream recipe makes the perfect Cool Whip replacement! Instead of buying a tub of it at the store, just use this Homemade Cool Whip recipe. There’s a lot of extra ingredients in the store-bought stuff that you probably don’t want, which is why homemade is always better!

Why Use Stabilized Whipped Cream?

You might be wondering why you should even be using stabilized whipped cream. Well, if you’re planning to make whipped cream ahead of time to use on desserts, then this is a must!

Unfortunately, regular whipped cream doesn’t hold up very well. You’ve probably noticed how it starts to basically fall apart after just a few hours. Everything separates, leaving you with flat, watery cream. Definitely not what you want to be using on your desserts!

This stabilized whipped cream will stay fluffy and hold up well for up to 24 hours, so you can prepare it before you start baking or making your desserts! 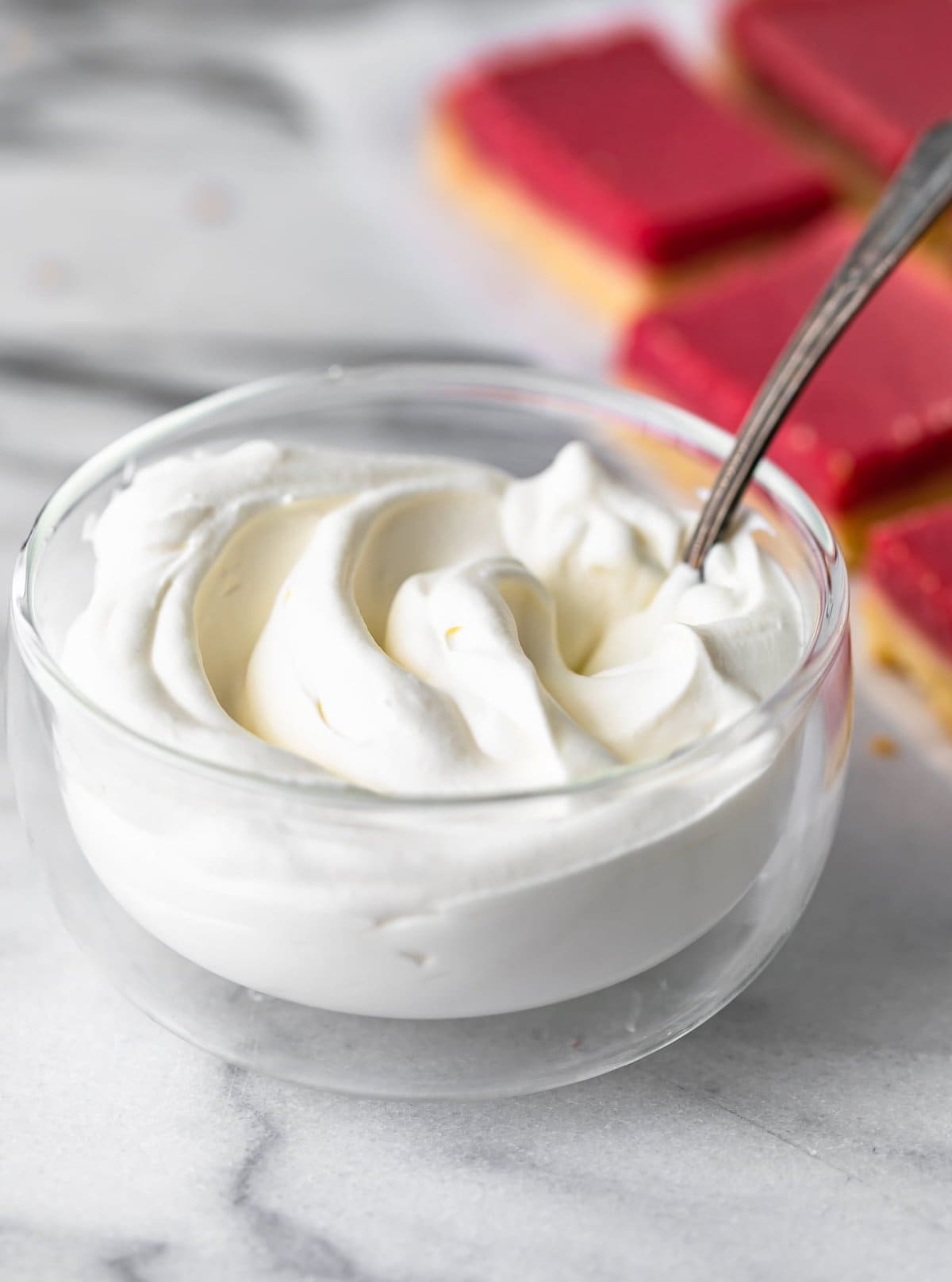 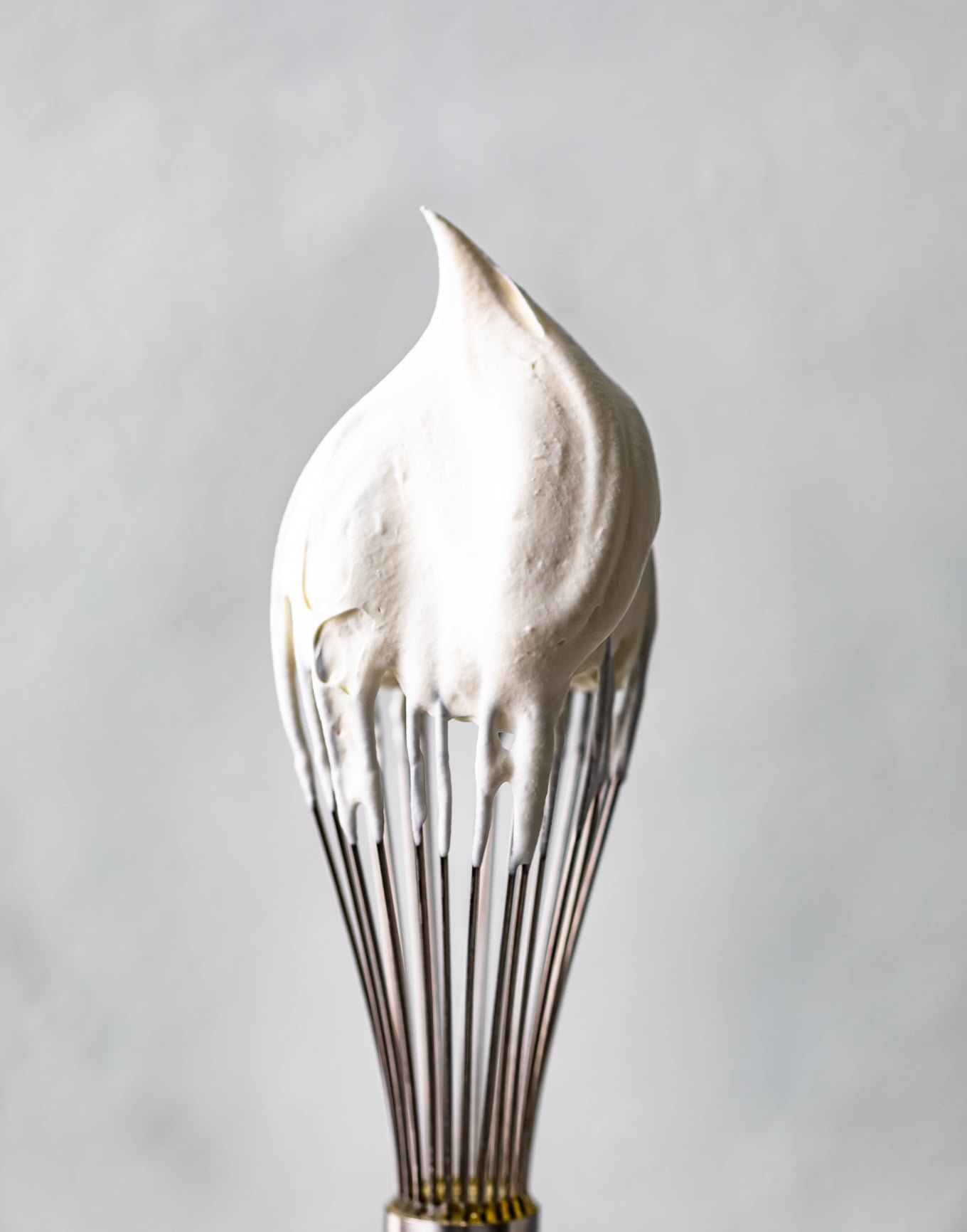 How to Stabilize Whipped Cream (How to Make Cool Whip)

This is SUCH an easy recipe, and won’t take you more than a few minutes to make. So anytime you make desserts, you can quickly and easily make some whipped cream to top it off!

Just refrigerate it until you’re ready to use it, and top all of your favorite desserts! 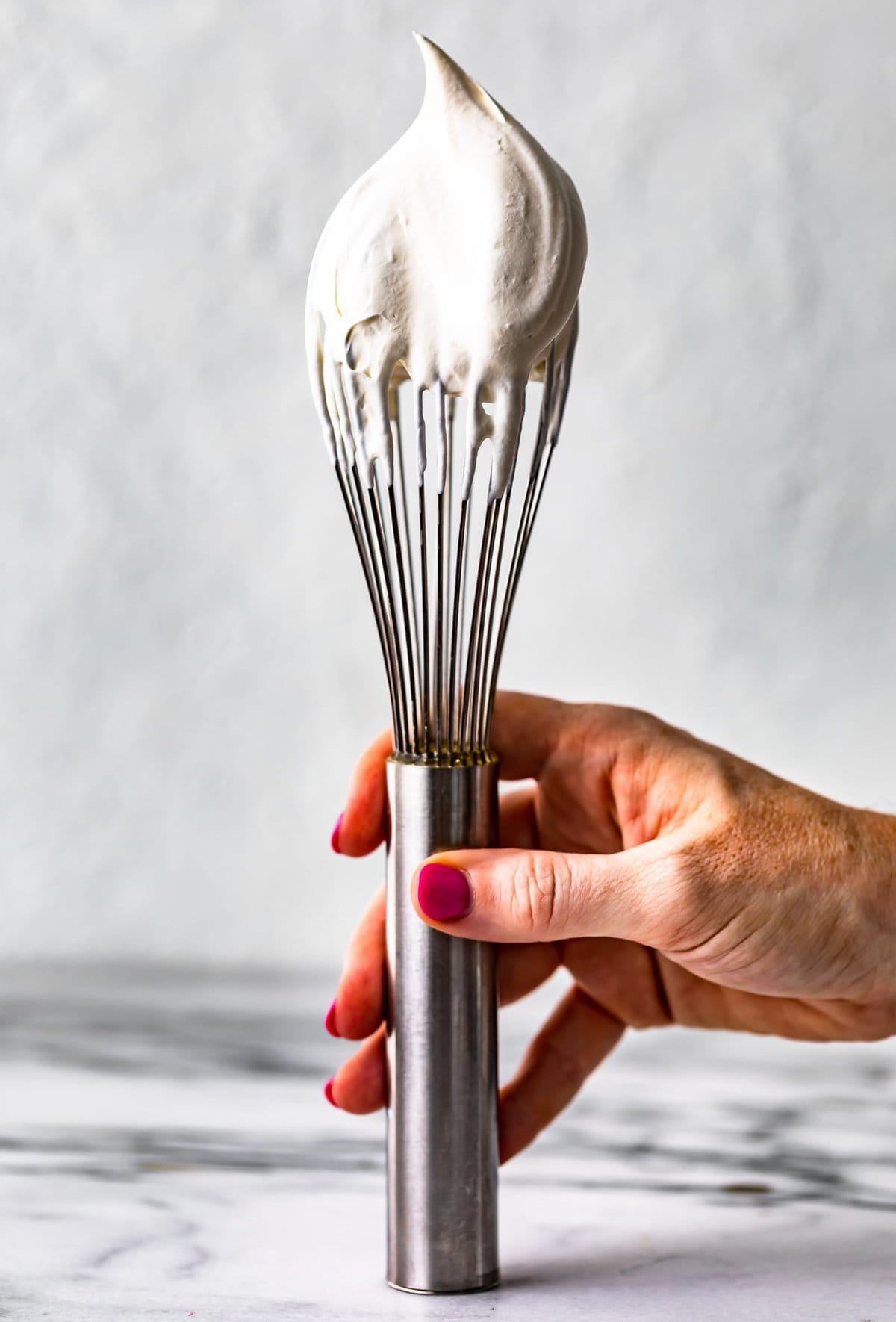 How to Store Stabilized Whipped Cream

The stabilized whipped cream should be stored in an airtight container, in the refrigerator. It will keep (stay stable) for up to 24 hours.

I’ll be the first to admit that eating whipped topping with a spoon is a pretty tasty treat, but if you’re making this recipe, you’re probably hoping to use it as a topping for other delicious desserts. Here are a few ideas for what you can use this stabilized whipped cream on! It really goes hand in hand with homemade pies, but you can use it on all kinds of recipes. 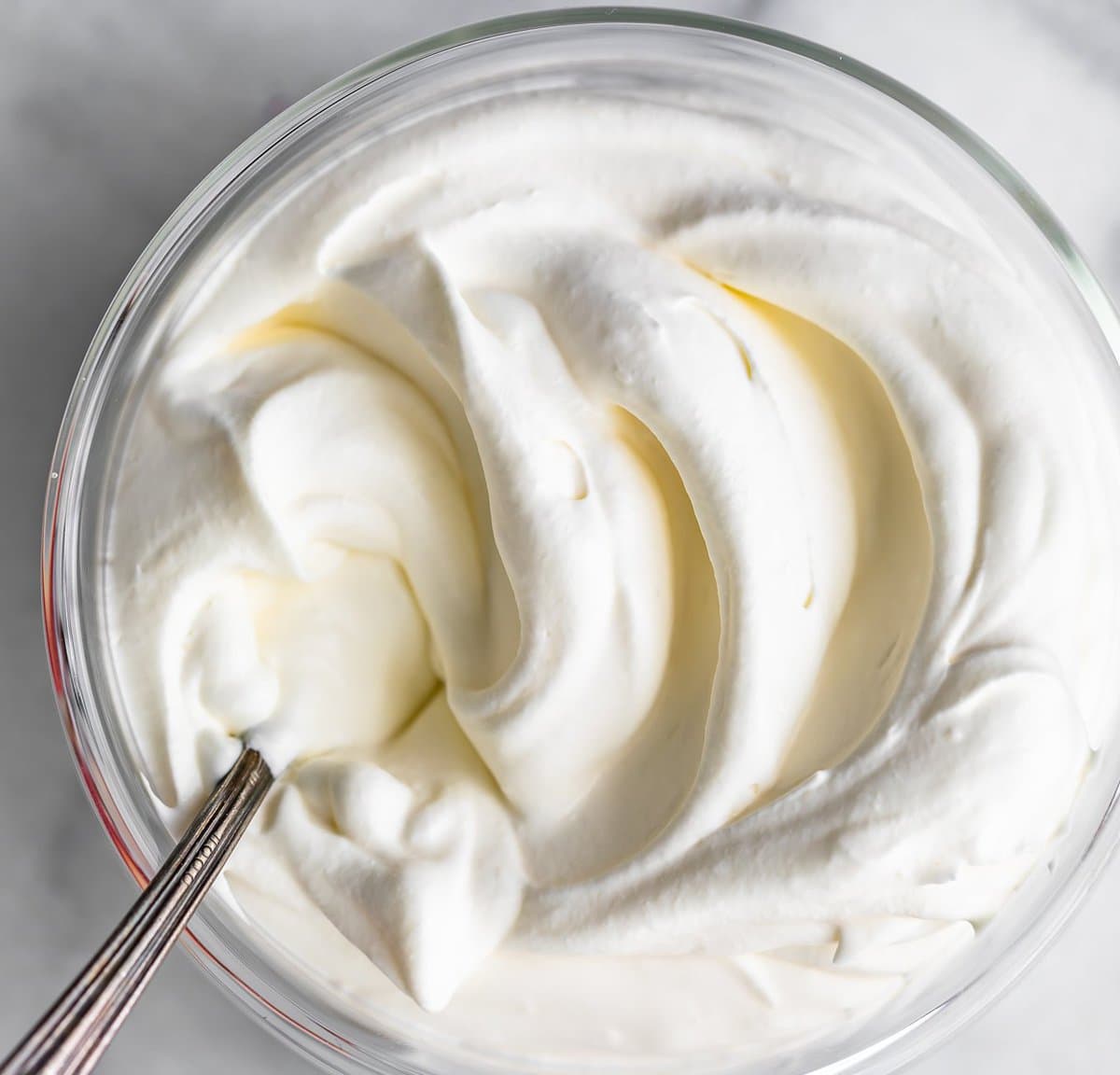 This is going to add that perfect final touch to all of your favorite desserts and baked goods!

See the recipe card for details on how to make Stabilized Whipped Cream. Enjoy! 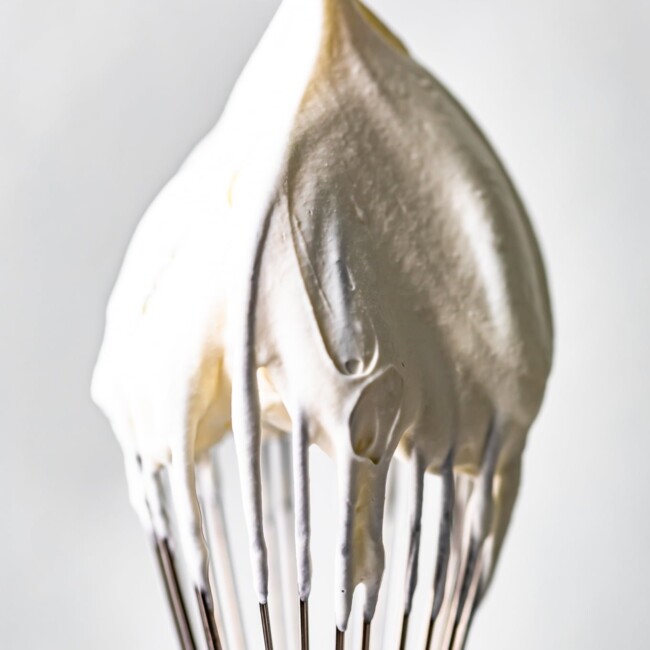 Serves16
Print Rate Save Saved!
Stabilized Whipped Cream comes in handy when making desserts, and it's actually really easy to make! Use this Homemade Cool Whip as replacement for the store-bought whipped topping. Read on to learn how to stabilize whipped cream!

Storage: Store stabilized whipped cream in an airtight container in the refrigerator for up to 24 hours. 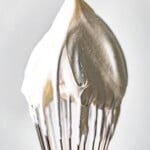 I don’t yet know how it will turn out, but I thought you’d want to know that there seems to be a few important missing words. It took me getting to this page to find out 1-1/2 t of what. And how much the recipe suggests for heavy whipping cream. There may be more missing words, so look at the beginning here, a few pages back. Sorry, I really don’t want to be critical!

Thank you for letting us know!

This is probably a stupid question – but I came to this link for “homemade cool whip”. But what your recipe is – is problematic. Many use Cool-Whip because we are lactose intolerant and use it because it’s dairy free. Your recipe isn’t dairy free. Have you encountered another version anywhere that gives a dairy free version? (I would much prefer to use yours but even those lactose pills aren’t enough to allow me to consume dairy.)

I have not made a dairy-free version yet!

Can you make a flavored stabilized whipcream, like strawberry?

I haven’t tried this yet, but you can give it a shot with some extract flavoring!

I would suggest using the freeze dried strawberries (it’s a powder) found on Amazon. It will add flavor AND beautiful color! I have not used strawberry as my addiction is raspberry! Since I have not made this recipe, I can’t tell you an amount, but I would start with a teaspoon and taste test then add more if needed.

If you add a small strawberry yogurt along with the whipping cream when whip it will give you a yummy strawberry flavored cream:)

On this recipe will it stay in a watermelon jello pie?

You can definitely give it a try!

QUESTION: I want to use this recipe for my ice cream cake – will it stay in the freezer a few days?
Thank you

Can this be used when making a layered pie? Would it hold up if made ahead?

This was so fluffy and delicious! Held up very well and was so easy to make.

This has saved me so many times! I have seen people make whipped cream and they over mixed, and that’s never good. This makes it just right!

Such a good recipe! Thanks for sharing.