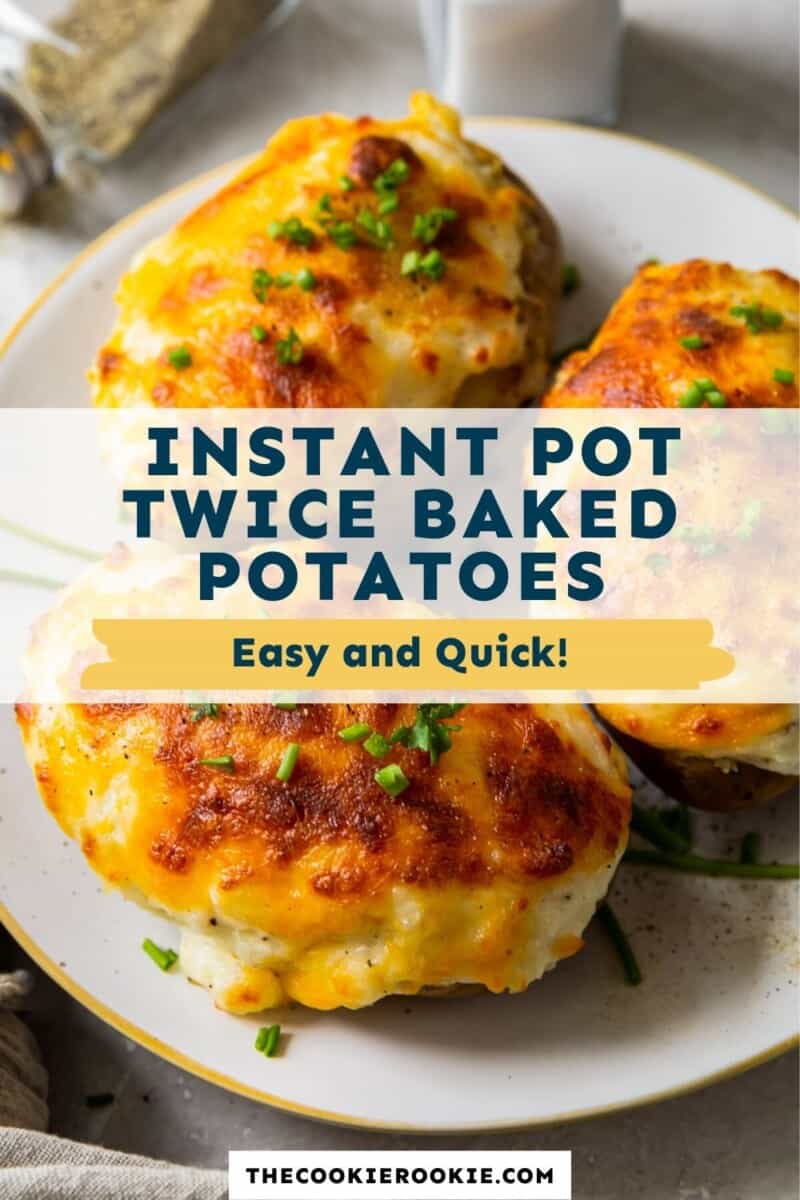 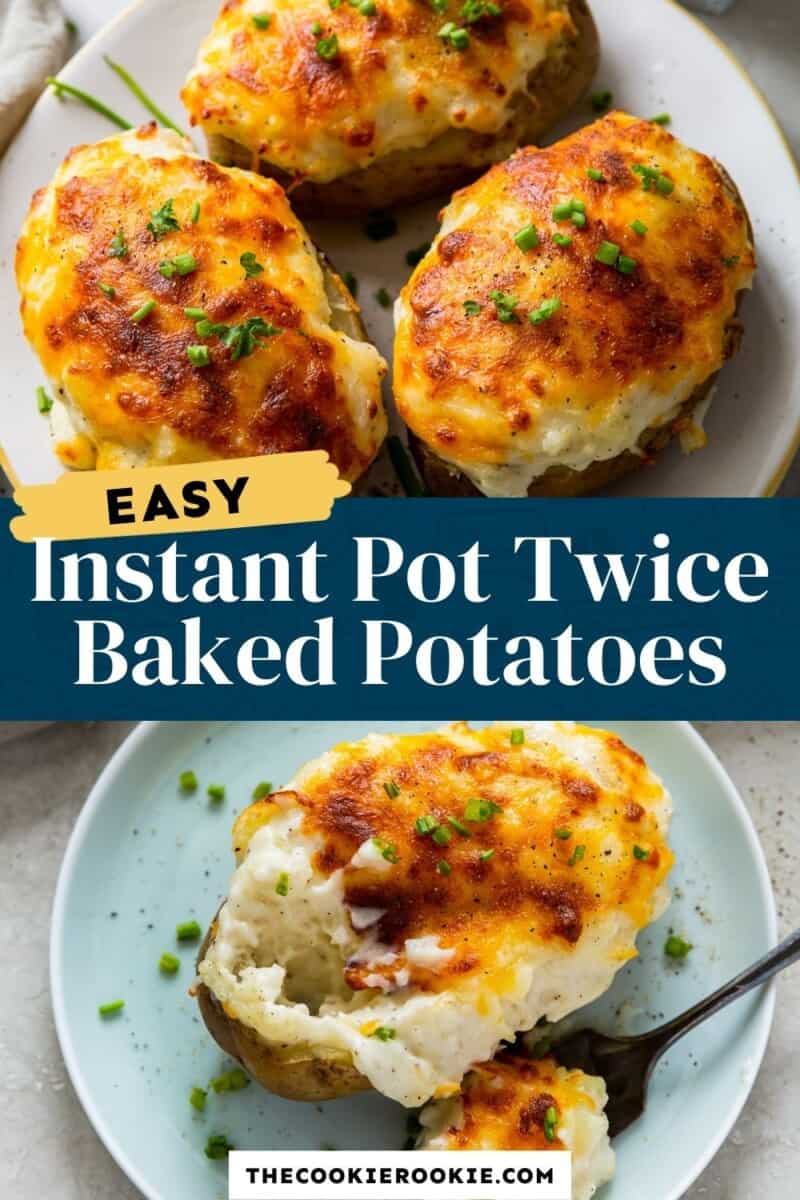 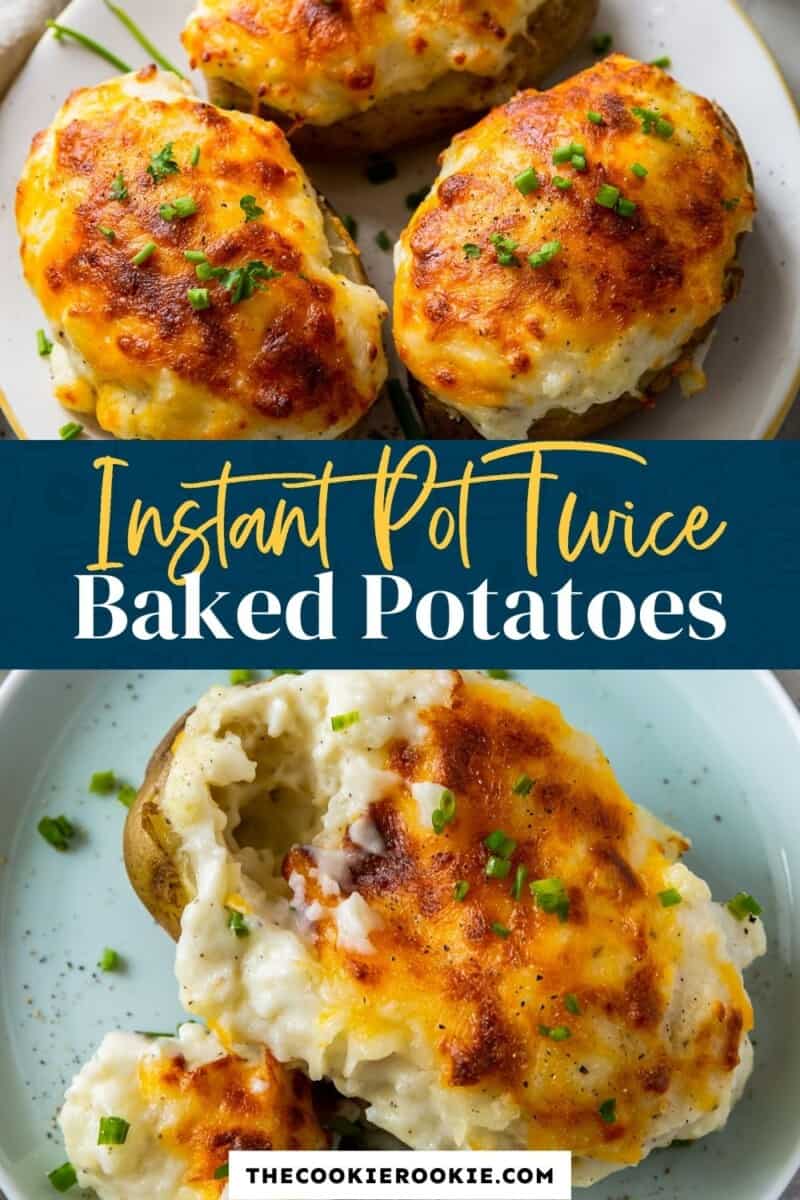 These creamy and cheesy twice baked potatoes are a breeze to make in the Instant Pot. So much quicker to make than in the oven, they make one delicious side dish for any meal.

Whenever we go to our local steakhouse, I can’t resist ordering a twice baked potato on the side. So cheesy and delicious, what’s not to love?!

I don’t make them that often at home as they do require a pretty long cooking time, but since I found this Instant Pot method, things have changed!

They come out just light and fluffy, but are ready in just a fraction of the time.

Be sure to try my Instant Pot Potato Salad and Loaded Potato Skins too!

Making the most perfect twice baked potatoes have never been easier. Grab your Instant Pot and lets go!

How to make Twice Baked Potatoes in an Instant Pot

Can you make twice baked potatoes ahead of time?

Yes! These are a great make ahead dish. You can make the whole recipe up and then keep them refrigerated for 4 to 5 days and reheat them in the oven at 360F to warm through.

Can you freeze twice baked potatoes?

Yes, these are great to freeze! Make the recipe all the way up to broiling them, instead, stuff them, place the cheese on and let them cool. Freeze them solid on a baking sheet then store in a container for up to 3 months. Cook them from frozen, covered with foil, at 350F for around 45 minutes.

What do you top them with?

These twice baked potatoes are great to serve as they are, but they are great loaded with some sour cream, chives and crispy bacon bits.

What are the best potatoes to use for twice baked potatoes?

The best twice baked potatoes are made with large starchy potatoes like Russets or Yukon Gold. Their skins get nice and crispy and the flesh is light and fluffy. It’s best to avoid waxy potatoes like reds, as they won’t have that same light texture.

These Instant Pot twice baked potatoes are great to serve with all of your favorite meals. Try them with:

This potato side dish is perfect to serve with weeknight meals, or pull out all the stops family feasts. No one will be disappointed when you serve these up!

This is such an effortless potato side dish that’s sure to impress! Be sure to make extra as they’ll disappear quickly!

These Instant Pot twice baked potatoes are everything you’d expect the to be, and the fact that they are so quick means that you can make them any time you get a craving!

Serves4 people
Print Rate Save Saved!
These creamy and cheesy twice baked potatoes are a breeze to make in the Instant Pot. So much quicker to make than in the oven, they make one delicious side dish for any meal.

Worked great, made once and making again now. Thank you for sharing!

Thanks for stopping by!

I am curious. Since I have a Insta pot air fryer lid, can I put them on broil in the air pot fryer instead of the broiler of the oven?

You can give it a try!