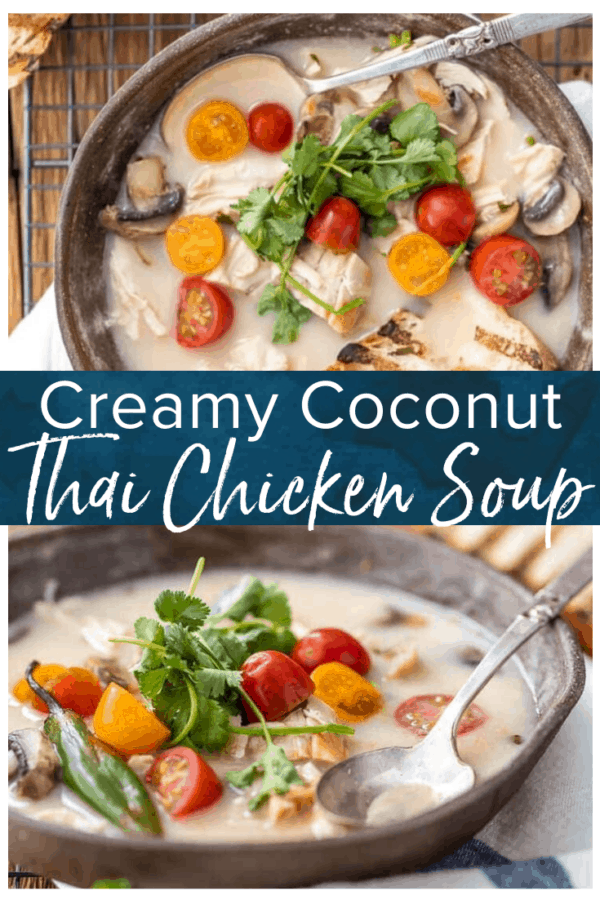 Thai Chicken Soup is HEALTHY, EASY, and SO DELICIOUS! This creamy Thai Coconut Chicken Soup recipe is made with coconut milk, cilantro, mushrooms, chicken, tomato, and chiles. So much flavor in such an easy soup recipe!

This Thai Chicken Soup with coconut milk is so creamy and so flavorful. It’s the perfect soup for any time of year!

This Thai Coconut Chicken Soup is incredibly easy and made in under 30 minutes. Plus it’s healthy, creamy, and super comforting!

Recipes like this remind me that cooking doesn’t have to be difficult to be a labor of love. Sometimes the way the flavors come together, or the feeling it will give the person who eats it, is enough to make the love shine right on through.

Not to get too mushy, but sometimes I’m just reminded of how good it feels to be able to feed good food to the ones you love, how it can bring people together, and how it can be such a great way to care for others. Soups are especially magical like that.

This coconut chicken soup is perfect for soothing a cold OR for warming up any winter night.

Pat has been sick this week, so I have had healthy soup recipes on the mind. I didn’t want to make him just any ole soup (although you can’t go wrong with Chicken Noodle Soup when you’re under the weather). This Thai Chicken Soup seemed like a good mix of healthy, delicious, and comforting.

As I was stirring and simmering, I was so excited for him to try this. The fragrance, the flavors, the spice (he loves spice); it was all a way to show my love. That’s what cooking should really be about, after all.

How to Make Thai Chicken Soup

This creamy coconut chicken soup is great for a change on sick days, but it’s just as good when you’re NOT sick. If you’re a fan of Thai food, you’ll just love the flavors here. Plus it only takes 30 minutes to make! Easy dinner alert!

Be sure to watch the video to see the step by step recipe!

Freezing any soup with milk/cream in it can be iffy. Will it ruin in? Maybe not completely. But will it be quite the same? No.

You will certainly have more luck freezing a soup with coconut milk (like this recipe), than a soup with dairy milk. And if you use lite coconut milk, the texture shouldn’t be too different after thawing and reheating.

But here’s my recommendation for freezing this recipe:

Whether someone is sick in bed, or you’re just trying to beat the cold winter nights, nothing is as comforting as a bowl of soup! This Thai Chicken Soup is so warming and delicious, but we’ve got plenty more soup recipes for you to try this upcoming soup season (yes, it IS a season).

I hope you love this creamy Thai Chicken Soup recipe, packed with all the best and most comforting flavors. It’s so easy to throw together, and I KNOW your favorite people will feel super loved while eating it!

Watch the video and check the recipe card for details on how to make Thai Coconut Chicken Soup. Enjoy!

Serves6
Print Rate Save Saved!
Thai Coconut Chicken Soup is HEALTHY, EASY, and SO DELICIOUS! This creamy Thai Chicken Soup recipe is made with coconut milk, cilantro, mushrooms, chicken, tomato, and chiles. So much flavor in such an easy soup recipe!

Very nice, I added carrots, broccoli and courgettes to the soup and it came out so delicious! Had to bowls at once 😂

No leftovers this time!

I can’t wait to try this recipe. It looks delicious. I guess this is Keto friendly as i am on Keto diet.

Would you recommend any other veggie combo’s to be used in this soup? It looks AMAZING but I’m not a tomato or mushroom fan. Would love to know if you think something else would go well?

I think carrots or potatoes would be delicious! Hope you love the recipe :)

I haven’t tried that, but I do think it would work just fine. It shouldn’t be any problem. The soup might just be a tad thinner, but I wouldn’t think it would make a huge difference. I hope you love the recipe! Thanks for saying hi :)

I just made this it’s super good thank you for posting this. Followed recipe to the T, as they say.

I’m looking for something that can be frozen by a new mommy. Does this freeze well?

I’ve never frozen it but I would think it would freeze fine. Hope the new mom loves it!

Does this recipe freeze well????

I love soup and anything Thai! This looks lovely!

You had me at Coconut! That soup is stunning!

I could eat this every night and be one happy girl!! Looks delicious!