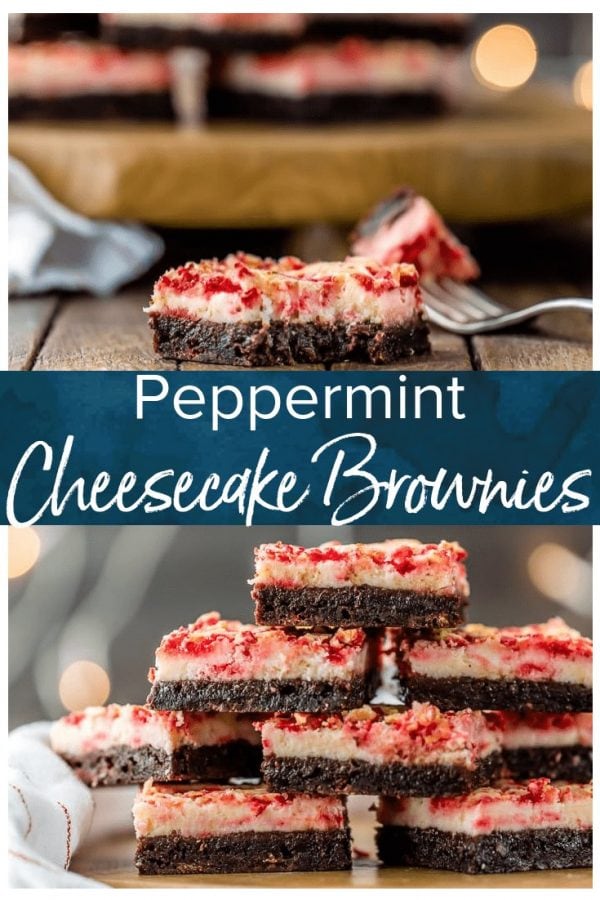 Peppermint Brownies are a MUST MAKE recipe for Christmas! Holiday baking has never been so easy or delicious. Peppermint, cheesecake, and chocolate is a tasty combination, and these cheesecake brownies are the perfect Christmas brownies, but I make them year round. They’re amazingly delicious!

Peppermint Brownies are the perfect festive treat for Christmas. I can’t get enough of these easy Peppermint Cheesecake Brownies, no matter what time of year it is!

For those of you that have been around for the ride since the beginning of The Cookie Rookie, you know that I have come a long way.

I don’t claim to be a master chef by any means, but when I started out I could barely boil water. Even though I feel like I’ve learned so much over these 3 years, I still don’t feel totally comfortable with baking. You bakers out there, I RESPECT YOU! It’s a different ball game, and I recognize that.

That being said, I CONQUERED these Peppermint Brownies and they are so delicious. It was hard to not eat them all before Pat got home. The struggle is real! Now they’re one of my favorite Christmas dessert recipes.

These cheesecake brownies are the perfect mix of two amazing desserts, and nothing says Christmas quite like peppermint. They are truly the best Christmas brownies ever.

If you’re looking for the perfect Christmas brownies, look no further! These Peppermint Cheesecake Brownies are exactly what you need!

I had a bit of inspiration for these Peppermint Cheesecake Brownies. I adapted this delicious recipe from the ridiculously amazing site, Chocolate Chocolate and More.

If you’re looking for a baking recipe, that is the site to check first. Joan’s Brownie Bottom Cheesecake Bars were calling my name and I knew I had to give them a try! I’m pretty proud with what I came up with. The perfect Christmas dessert recipe!

In all my years, I’ve never seen such a perfect Christmas brownies recipe! I mean, Peppermint Brownies were made for the festive season, and I’m so excited to serve these on the big day. The mix of mint and chocolate is just so good!

These Peppermint Cheesecake Brownies are also delicious year-round. You could substitute so many different flavors for the cheesecake layer, making this a must-make for every occasion. I would love to hear your creative adaptations!

How to Make Peppermint Brownies

These Peppermint Cheesecake Brownies are so much easier than you think. Remember who you’re dealing with here: if I’m sharing them, it’s because they’re easy!

If you REALLY want to make them simple, you could also use a boxed brownie mix instead of making the brownie layer from scratch. Whatever works for you! We’ll be using a 9×13 baking dish for this recipe (lined with parchment paper or sprayed with non-stick spray).

Here’s a quick overview of how to make Peppermint Brownies:

Cheesecake Layer (make this while brownies are baking)

Check the recipe card for full detailed instructions and WATCH the VIDEO to see it in action.

Do you need to refrigerate cheesecake brownies?

Yes, you should keep these in the refrigerator both before and after serving. Let them sit in there until you serve to get that chilled effect. You should also store leftovers in there since these are half cheesecake.

Finally, the ultimate Christmas Brownies! I love these Peppermint Cheesecake Brownies so much, and I just know you guys will too. So get to baking and enjoy your Christmas!

Watch the Video and See the recipe card for How to Make Peppermint Brownies. Enjoy!

If you like these peppermint brownies, try these other Christmas dessert recipes: 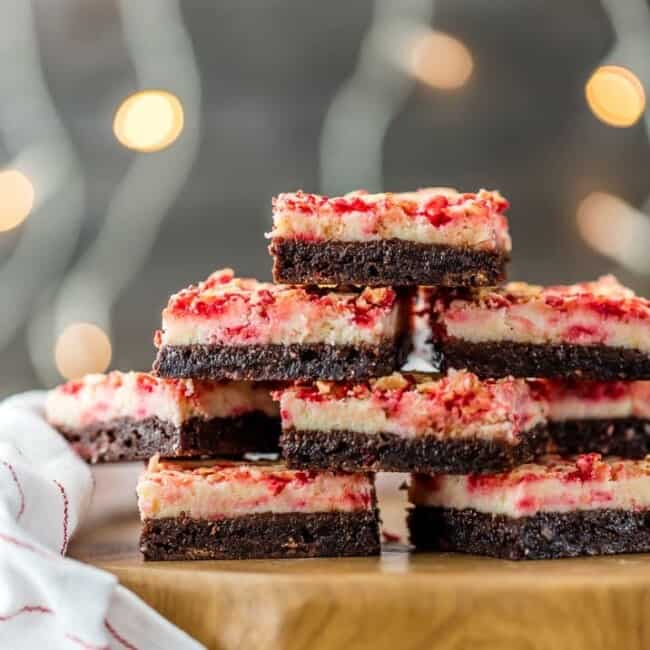 Serves24 brownies
Print Rate Save Saved!
Homemade peppermint brownies are topped with a layer of peppermint cheesecake for a creamy, chocolate-y dessert.

FOR THE BROWNIE LAYER (SEE NOTE)

FOR THE PEPPERMINT CHEESECAKE LAYER

Storage: Store peppermint cheesecake brownies in an airtight container in the refrigerator for up to 3 days or in the freezer for up to 1 month. 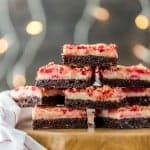 The candies melted throughout both the brownie and cheesecake layers, which ruined the texture of both. Maybe the baking chips would make a difference? But with crushed candy cane, the candies settled and created a tough sticky layer at the bottom. It was so sad because the flavours were phenomenal, but we couldn’t get past the bizarre crumbly-ish cheesecake and soggy brownie

I’m so sorry you all didn’t enjoy this one!

I was SO excited to make these – but they did not turn out well! They’re very meh. The brownies are way too cakey and not chocolatey, and the cheesecake part is very meh also, you can only kind of taste the peppermint. I’d try these again but with less flour, more cocoa powder, and maybe a little more peppermint extract. Comparing fudgy brownie recipes and I see that this one calls for a lot more flour and less cocoa than a lot of others do. I even thought to myself while pouring the batter in the pan that it was really thick and not very dark! Bummer all around

I’m so sorry you didn’t love these!

I made these into raspberry cheesecake brownies when i realized i had too many candycane desserts planned for a Christmas event. They were seriously delicious. Changes:
In brownies, subbed reg choc chips for mint crunch chips.
Subbed vanilla extract for peppermint.
In cheesecake layer:
Omitted mint chips and candy canes. Drizzled 1/3 cup raspberry puree and swirled with a knife.
Note: I also realized my sour cream was bad when I was already halfway through the recipe, so I subbed in 1/8 cup skim milk instead. Cheesecake layer was very creamy and delicious, but had to bake about 5 min longer to stop jiggling.


This was fantastic. I immediately regretted only making 1 batch.

I’ll have to give that recipe a try!! It sounds delicious!

I am using this recipe but only have creme de menthe baking chips vs peppermint chips. Also hoping that I can use vanilla extract in the cheesecake batter because I don’t have peppermint. Hope it turns out great! The original looks amazing!

I think that will taste amazing!!

If you use brownie mix, do you fully cook it? I did 20 min out of ~30/35 and the whole thing was pudding at the end and is currently residing in the trash. The cheesecake layer was too much on the pudding and it was a mess:( I’m willing to perhaps try again but I don’t understand what happened? Should the cheesecake layer be super thick too?

Hmm, I’m not sure what could have happened. The brownies didn’t firm up in the 20 minutes so you could pour the cheesecake on and continue? Did you use a 9×13 size pan? The cheesecake layer should be about as thick as shown, about 1/2 inch. I’m sorry I’m not more help, I’ve never had this happen.

My cheesecake bars tastes great, but my brownie part in the center didn’t cook all the way through. I used a tin foil pan so maybe that was my problem, open to any suggestions for next time????

looking Awesome, My son definitely going to love this….

I made these last year and am back for the recipe again. They are super festive and delicious. Everyone loved them.

Hope you love them and have a very Merry Christmas!

If I use boxed brownie mix, should I use the whole mix? Seems like it might make thicker brownie part than if I used the ingredients above. Also, will the bake time remain the same? I don’t want the brownie part to become too hard! I believe the boxed brownies bake for like 20-30 min until completely finished.

Can’t wait to make these though!
Thanks

As long as you don’t use the family size box, it should be fine. The 20 minute cook time in the ingredients won’t cook the brownies all the way, the film will just be beginning on the top. They continue to cook when you add the cheesecake layer. Hope you love them!