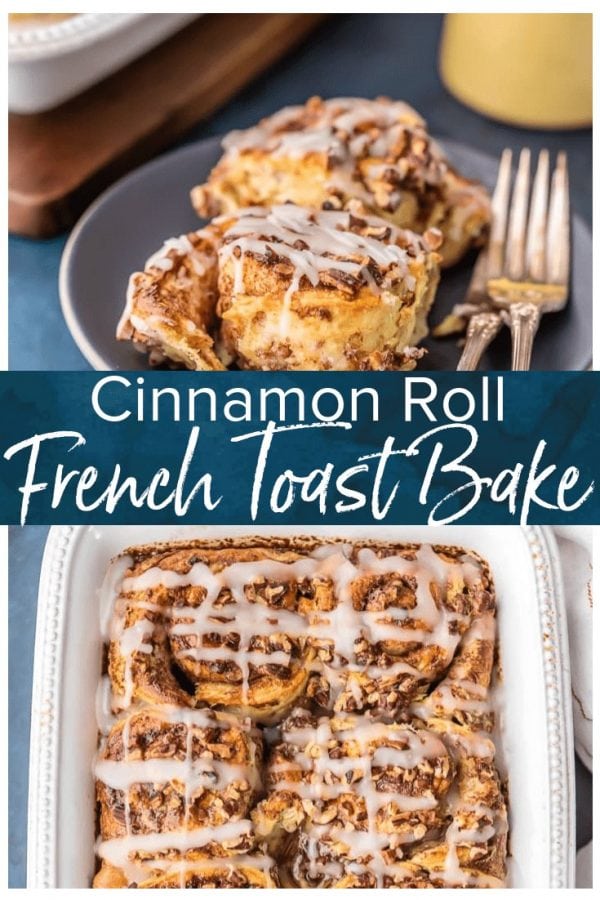 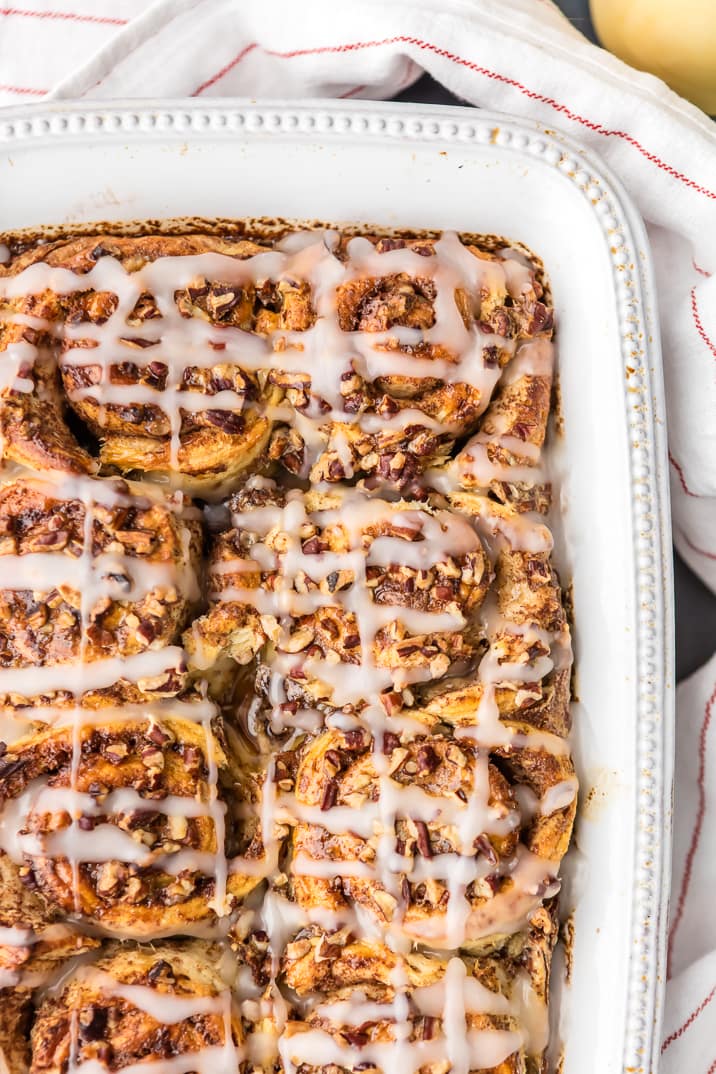 This Cinnamon Roll French Toast Casserole is the recipe for those mornings. I actually think this recipe is perfect for Christmas morning too. Wake up as you please, open presents with your loved ones, and then make a super simple Cinnamon Roll Casserole breakfast that will KNOCK THEIR SOCKS OFF in less than 30 minutes from start to finish. And let’s not forget Easter Brunch!

This Cinnamon Roll French Toast Bake is one of our favorite Christmas morning breakfast recipes. It’s an easy french toast bake that everyone will love! 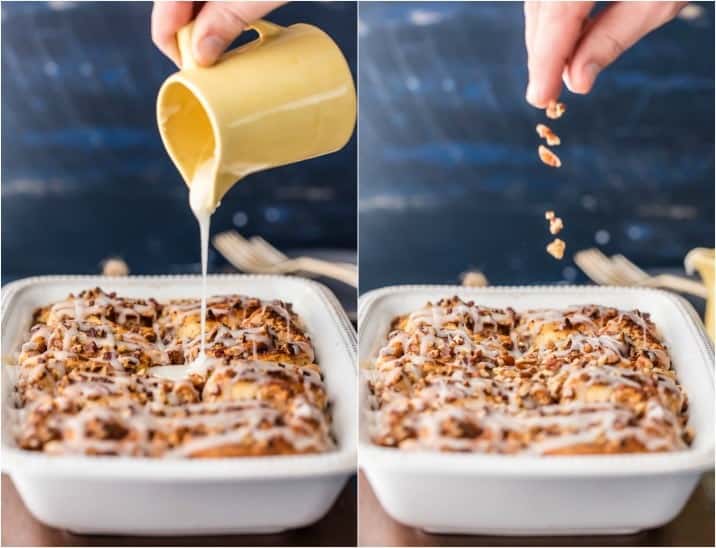 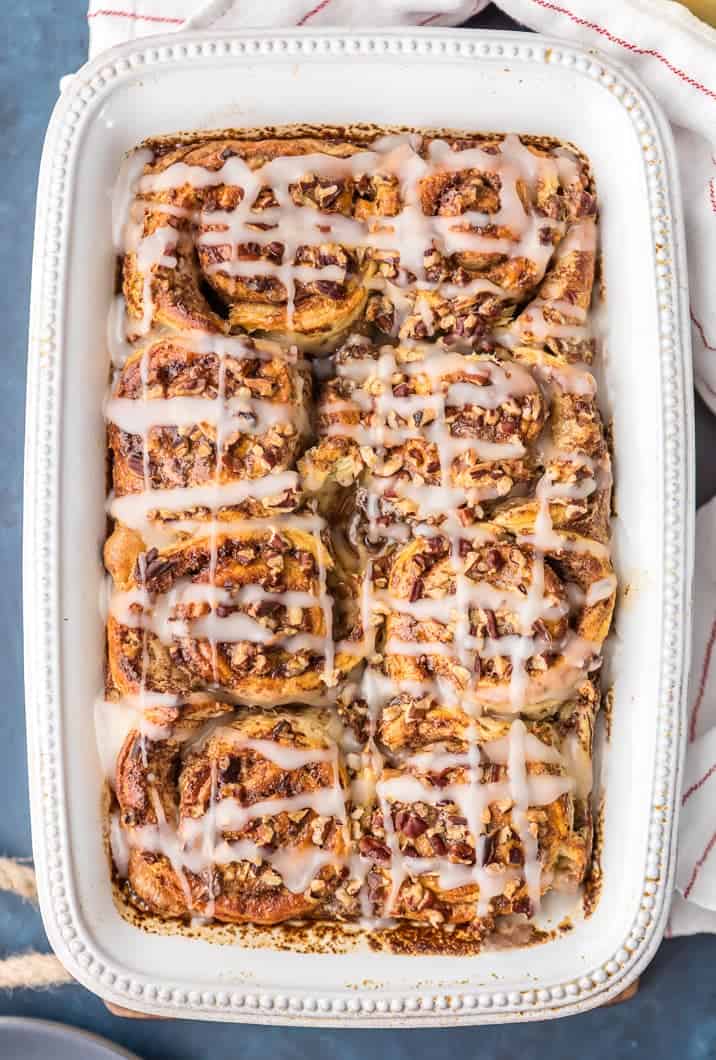 Having this great and easy Cinnamon Roll French Toast Bake as a start to your mornings is sure to make for a delicious day. And if you make this on Christmas morning, everyone will love you! It’s sweet, it’s delicious, and it’s so simple to make. No waking up early for this easy cinnamon roll bake!

I’m just always a fan of recipes that make mornings easy and fun. This breakfast is sure to please everyone from the adults down to the kids. It’s a great holiday recipe but also perfect for any time of year. Saturday mornings are better with a delicious (SIMPLE) recipe! 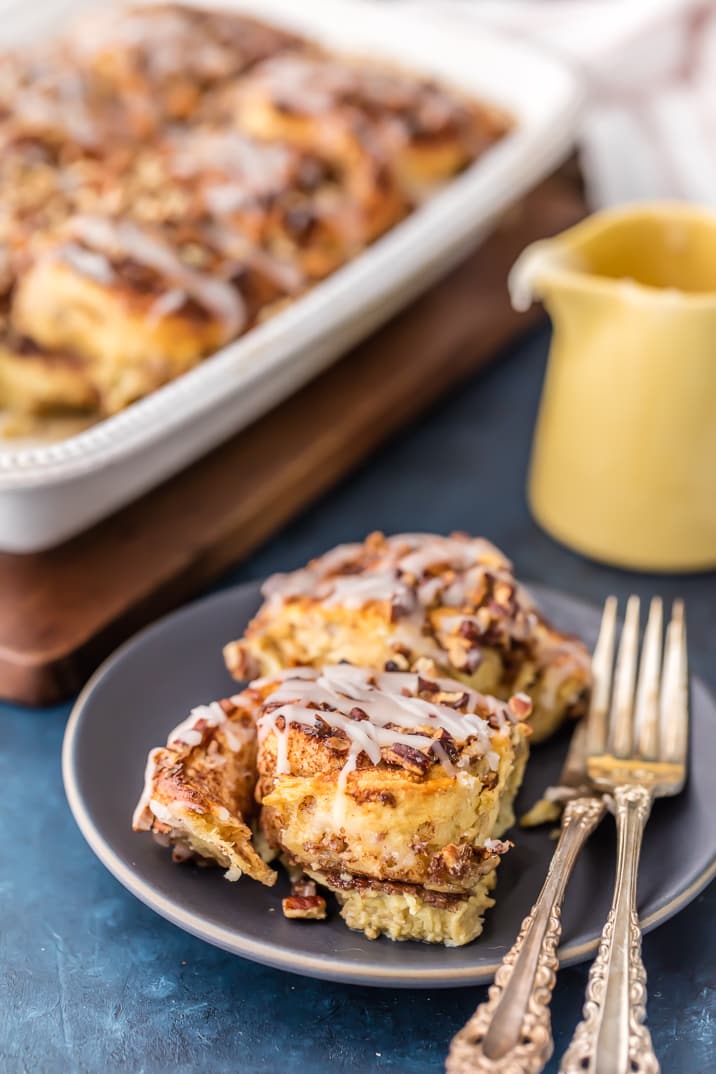 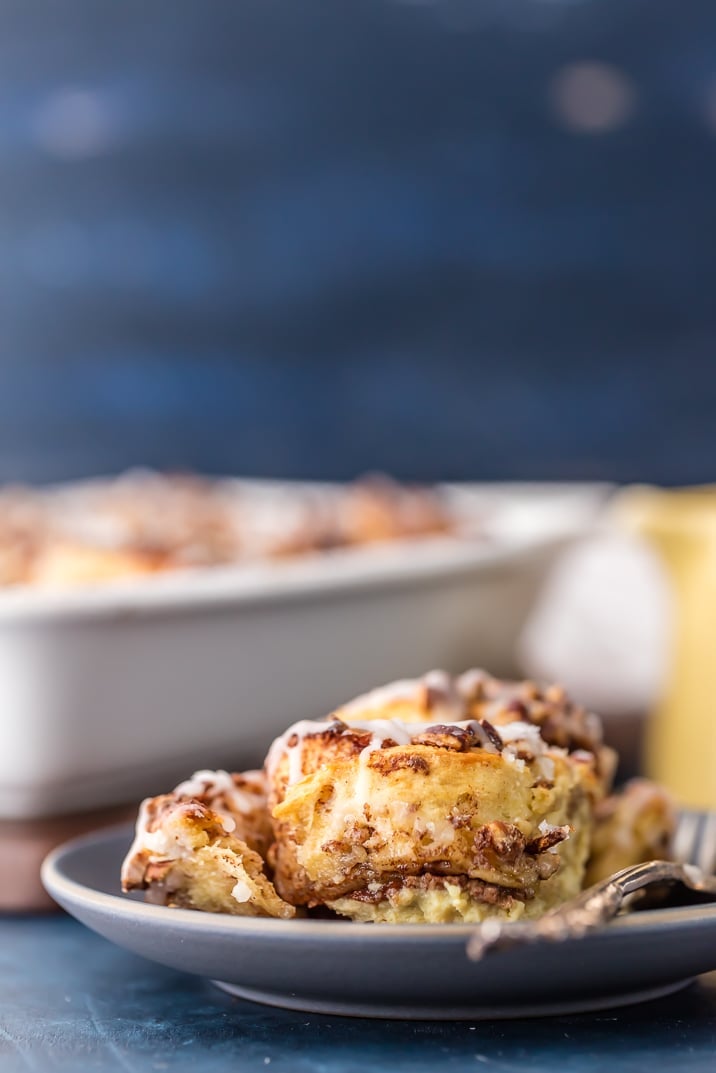 Making this cinnamon roll french toast bake is truly as simple as placing the premade cinnamon rolls in a baking dish and pouring your egg mixture over top. I use the icing that comes in the can of cinnamon rolls on top and sprinkle with toasted pecans once it’s done. That’s it! I told you this was an easy recipe!

If you prefer a more traditional Cinnamon Roll Casserole approach, you can chop up the premade rolls into cubes before placing in the pan. Easy peasy!

This easy french toast bake recipe was created for all the anti-morning people out there. All the people that would rather be night owls than wake up at the crack of dawn. Real cinnamon rolls can be made another day. SUPER EASY CINNAMON ROLL FRENCH TOAST BAKE can be for today. 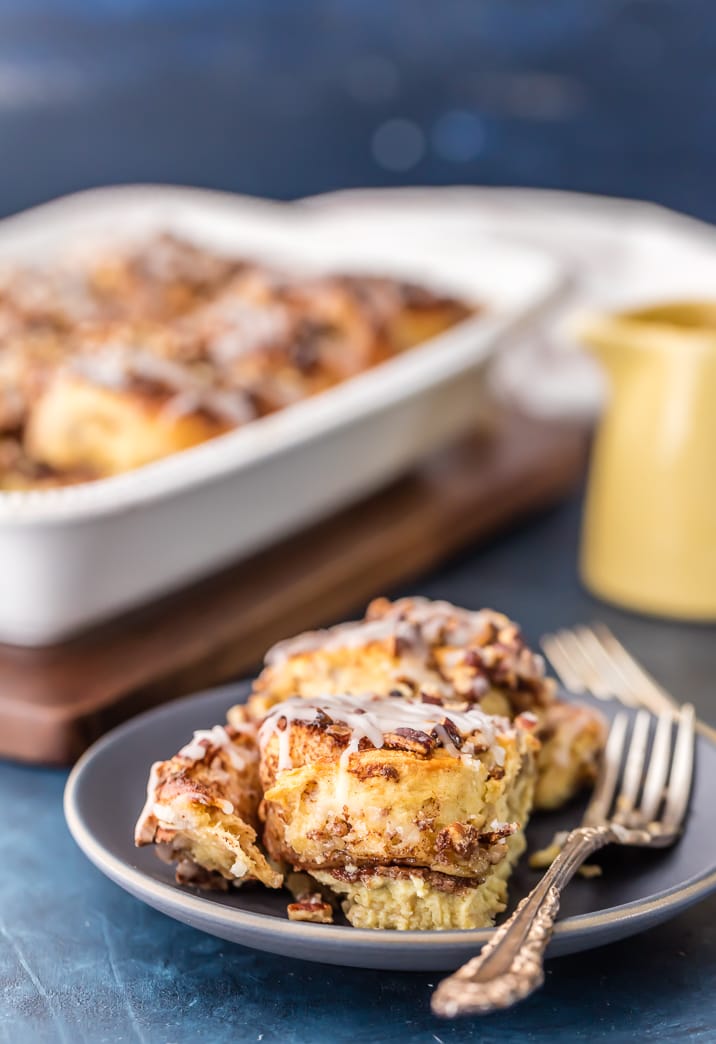 This Cinnamon Roll Casserole is a great complement to recipes like Ham and Cheese Breakfast Casserole or Easy Breakfast Pizza. Every savory breakfast needs a sweet companion! So if you’ve got a big family to feed or a bunch of guests over for the holidays, make sure you have plenty of food. I mean, you can never have too much food on the holidays!

I’m also a big believer that each and every morning needs a great beverage. If it’s a fun girls’ brunch you can make our favorite Sherbet Mimosas or Apple Cider Mimosas, or if you’re dining with the kids you can make our Simple Mango Smoothie. I’m REALLY craving breakfast for dinner now! 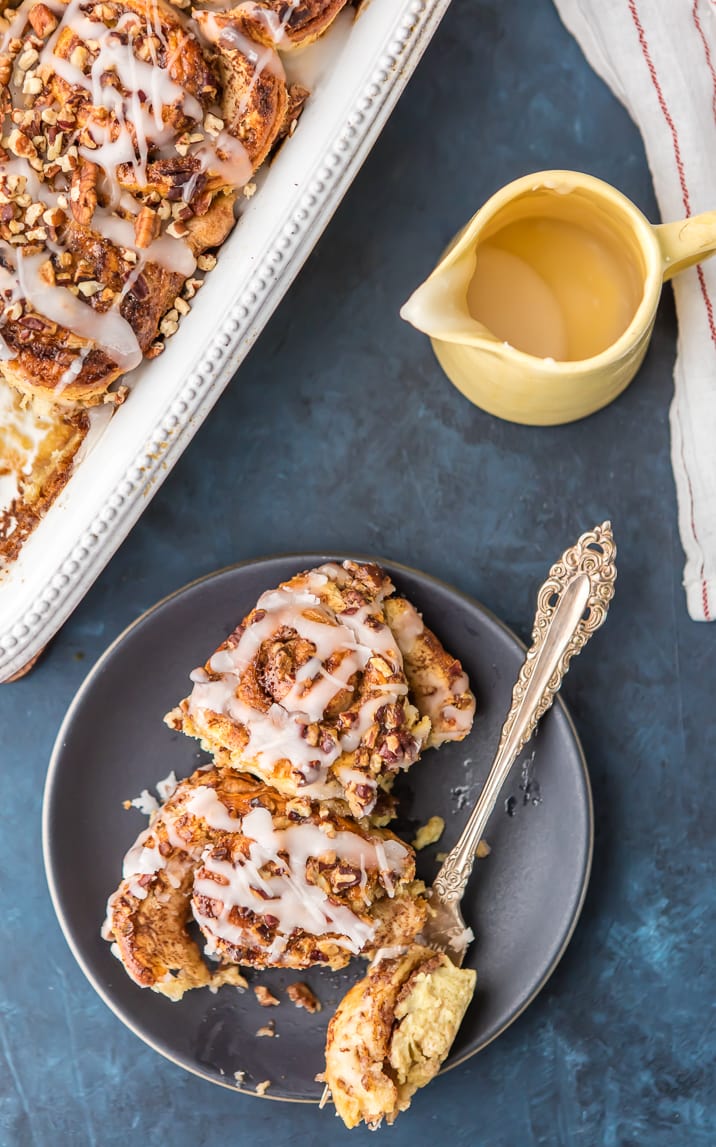 I know you and your family are going to absolutely LOVE this Cinnamon Roll French Toast Casserole. It’s incredibly delicious and so much fun to eat. This easy french toast bake should make an appearance on Christmas morning!

Watch the Video and See the recipe card for details on how to make this Cinnamon Roll French Toast Bake. Enjoy!

If you like this easy cinnamon roll casserole, try these other easy breakfast recipes: 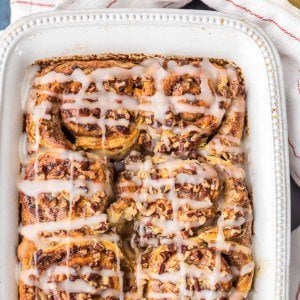 Storage: Store cinnamon roll french toast bake in an airtight container in the refrigerator for up to 3 days or in the freezer for up to 2 months. 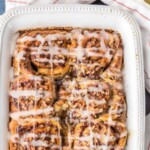 I made a small one, cutting the ingredients in half. I did melt some butter adding brown sugar making a thick syrup. I drizzled that over everything right before I baked it. It made it a crispy sweet crunchy topping. I didn’t bake it with syrup either and it was plenty sweet enough for my family. This will be a new regular in our house. Thank u very much for this recipe’!!!!!!!!!!

Becky Hardin
Reply to  Angela B

Thanks so much for stopping by and sharing your experience, Angela!

Can I make this in a cookie sheet pan?

I recommend using a pan with high sides to keep the filling from overflowing all over your oven!

Thanks for sharing, Stacie!

This was our Christmas morning breakfast and it was a very special treat! I cut the ingredients in half to use just one tube of cinnamon rolls. I subbed fat free half and half for the heavy cream and also used sugar free syrup. Absolutely delicious! Thank you!

Thanks for sharing, Kathy!

Merry Christmas to you and your family!

Yum! I will totally make this again. 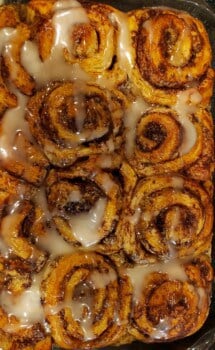 My mouth is watering, Chrissey!

Thanks for stopping by, Khalilah!

I too used the grands biscuits, rolled them in cinnamon and sugar as if making monkey bread. Delicious!

Thanks for sharing, Karen!

The Super Easy Cinnamon Roll French Toast Bake is a big hit!! Thanks for this easy to make recipe.