Brownie Pie is a rich, chocolaty dessert that’s almost too good to be true! A homemade fudge brownie recipe baked straight into a pie crust gives you two desserts in one. A layer of toasted pecans is mixed in to add a bit of crunch, while the brownies stays soft and moist. Top a slice with ice cream and drizzle with chocolate syrup, and you’ve got the best brownie dessert ever!

Brownie Pie is a chocolate-filled dessert that everyone will love. A homemade fudge brownie recipe baked into a pie crust…yum!

Are you ready for this amazing brownie dessert? Fudge brownies baked into a pie…just let that sink in. Because one great dessert isn’t enough, we mashed together two favorites to make something amazing.

This Fudge Brownie Pie recipe is SO delicious, so chocolaty, and so fun to share.

Start with a pre-made pie crust to make this chocolaty dessert recipe easy peasy. Whip up an easy homemade fudge brownie recipe, but instead of baking it in a dish, you’ll be baking it inside of a pie crust!

A layer of toasty, crunchy pecans is mixed in, and then you can top of this brownie dessert with some ice cream and chocolate syrup. Tell me you’re drooling too, because I definitely am!

This brownie pie is a special treat that’s perfect for just about any occasion. There’s really never a bad time for chocolate pie. Make one for after dinner, serve it to guests, or make one up for a holiday party. Everyone will devour this pie!

Fudge Brownie Recipe in a Pie

After making brownies from scratch a while ago, I realized that whipping up a fudge brownie recipe is no sweat! No need for boxed brownie mix here (although you can use it if you prefer), because this brownie dessert is simple.

We ARE using a pre-made pie crust to make things easy, and then you just pour the brownie batter straight in to bake. Brownies and Pie all in one. The best of both worlds!

Brownies aren’t quite complete without some ice cream on the side. I just LOVE the way cold ice cream melts on top of warm brownies. Everything mixes together so perfectly; hot and cold, chocolate and vanilla.

So of course we need that same combo with this brownie pie. Grab a slice while it’s warm, top it of with a scoop of ice cream, drizzle on some more chocolate, and enjoy!

How to Make Brownie Pie

Since we’re using a pre-made pie crust from the store, this brownie dessert recipe really just requires making the brownie batter and then baking.

Let the brownie pie cool for an hour or two before serving. Top with ice cream and enjoy! See recipe card below for full instructions.

This chocolaty Fudge Brownie Pie will be a hit with anyone and everyone! No one can resist this amazing brownie dessert, especially once you add on that scoop of ice cream.

If you like this brownie dessert, you’ll love these other dessert recipes too:

Fudge Brownie Pie How To Video

Serves10
Print Rate Save Saved!
Brownie Pie is a rich, chocolaty dessert that’s almost too good to be true! A homemade fudge brownie recipe baked straight into a pie crust gives you two desserts in one.

Note: To reheat the pie, place it in a 300°F oven, 10-15 minutes, or until warm throughout. Note: Be sure the pecans are toasted so they don’t get soggy, or do as I do and buy toasted/roasted pecans or Honey Roasted Pecans.

The best brownie recipe I’ve ever tried! I have done so many brownie recipe but this is my absolute favourite, plus it is very easy to do! It came out fudgy and crackly at the too, and it wasn’t too sweet nor bland, it was just the right amount of sweetness! Thank you so much for this recipe, I have it bookmarked for next time!

Just for clarification: Do you use 1 cup and 6 ounces of chocolate chips? In the description you melt 2/3 cup and then add the other 1/3 later. What happens to the other 6 ounces? Or am I reading it wrong? Thx for your help! 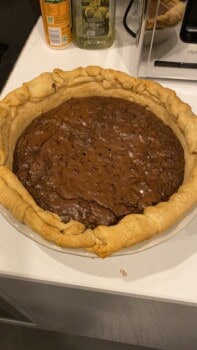 I have looked all over the internet for a good recipe for fudge pie. Yours is the best by far. Your video was great, and the recipe easy to follow. You have made my day! My Check dinner will be complete. Thank you so much and Merry Christmas!

Merry Christmas to you as well!! I’m so happy to hear you loved the recipe!!

Hi Becky! This looks SO delicious, can’t wait to try it out on Thanksgiving this year. I am wondering–are there any parts of this recipe (aside from the pie shell) that I can prepare ahead of time? For example, would it make sense to prep the batter the night before and store it in the fridge? Or would that make a big difference in the outcome?

Thanks so much in advance!

Sounds so delicous. IF I am really in a bind, can I use a boxed Fudge Brownie mix? I just wonder if enough or the correct size for the pie crust! Thanks.

I haven’t done it that way, but I do know it would absolutely work with that batter. You could always just bake up any excess separately :)

Gotta love a good pie recipe. Pies from scratch are a true testimony of love.

Made this for dessert tonight. Delicious and very easy. But I had to bake mine for at least twice as long. Maybe because I used a deep-dish pie shell? Not sure if the size either. Maybe it was only 8”? And even after all that time, not fully baked in the center, but I figured it had enough heat to kill the salmonella {lets’s hope}.

It could have been the depth of the pie dish for sure. I’m glad you loved it!