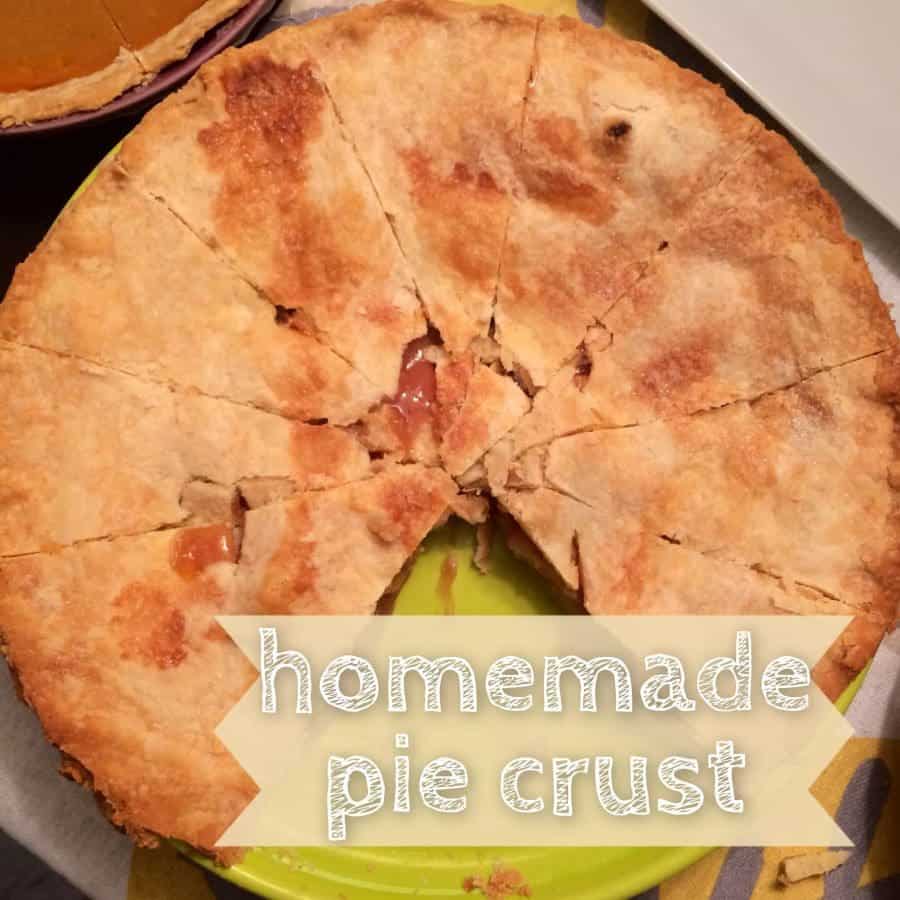 This Homemade Pie Crust recipe is so much easier than you’d think! Making pies from scratch adds an extra-special touch, and the crust is usually the hardest part. Not anymore! I’m showing you how to make pie crust so you can make the perfect pie every time!

Homemade Pie Crust is easy enough for anyone to make…even me! Learn how to make pie crust so you can make all your pies from scratch!

I love pies. I love them for any occasion, all year round. I love pumpkin pie, apple pie, chocolate pie… absolutely any kind of pie. I’m not picky here! To me, it’s one of the best desserts!

Making pies always intimidated me, mostly because of the crust. I could throw together some kind of filling, but I’d always use a pre-made crust instead of making my own. How are you supposed to make a homemade pie crust?!

It seems complicated, and I always heard stories about soggy, tough crusts, but I’m lucky enough to have a family that knows how to bake. And they’ve shared this pie crust recipe with me, along with lots of tips to make sure I get it right.

Now I can pass it on to you! I’m going to be making all the Thanksgiving pies, now that I can make a pie crust from scratch. I’m pretty impressed with myself.

Learn how to make pie crust with this easy, Homemade Pie Crust recipe. It’s the best way to start those holiday pies!

We keep it really simple with this recipe. You don’t need much to make a good crust! All you need is:

How to Make Pie Crust

Here’s the step-by-step process with some pictures thrown in to help illustrate.

How to Make a Double Pie Crust

Here are a few quick tips to help you make the best Homemade Pie Crust. They include a few things I’ve learned along the way, and a few things that have been passed down from those who know better than I do.

Should I Prebake the Pie Crust?

The answer depends on what kind of pie you’re making! My rule of thumb is this:

If your pie filling is not cooked, don’t prebake the crust. Just fill it and bake the entire pie according to the recipe.

If your pie filling doesn’t need much cooking time, then you should prebake the crust. In that case, bake the pie crust for 10 minutes at 450°F, fill it, and continue with baking according to the recipe.

Basically, if your pie isn’t going to be in the oven long, you’ll need to bake the crust first so it is fully cooked. But if your pie recipe calls for a longer baking time, don’t bother with prebaking! Prebaking also creates a crisper crust surface, which helps keep custard-type fillings from soaking into the crust.

How do I Keep the Dough from Sticking as I Roll It?

The secret to keeping the dough from sticking is the flour. Dust the surface, dust the rolling pin, dust your hands, and dust the dough with flour as you proceed through the steps.

Flour keeps the dough from sticking. Just make sure, though, not to overdo it. Too much flour can make you end up with a biscuit instead of a pie crust!

How Do I Keep the Crust from Burning?

If the crust is browning before the rest of the pie is done, you can use a commercial crust protector. Its a metal cover that leaves the center of the pie exposed, so it can continue to bake.

You can also tent the outside edges of the pie with foil to accomplish the same thing.

Once you master this Homemade Pie Crust recipe, you’ll be making pies left and right! You’ll use any excuse to bake a fresh pie because it’s so easy now, and when people find out you made the crust from scratch, they’re mighty impressed.

Here are some of our favorite pie recipes. You can use this Homemade Pie Crust as a base:

Serves8 slices of pie
Print Rate Save Saved!
This Homemade Pie Crust Recipe is so much easier than you'd think! Making pies from scratch adds an extra special touch, but the crust is usually the hardest part. I'm showing you how to make pie crust so you can make the perfect pie every time!

Nutritional information reflects 8 slices of pie and a single crust.

Hi there, I’ve been looking for a great all around pie crust. Am I able to make this in advance? If so how many days in advance? How should I store it if so? Thank you :)

best blog I have found online..

Thanks for supplying this sort of fantastic written content!

Ok, you made this look easy. Maybe I can muster up the courage.