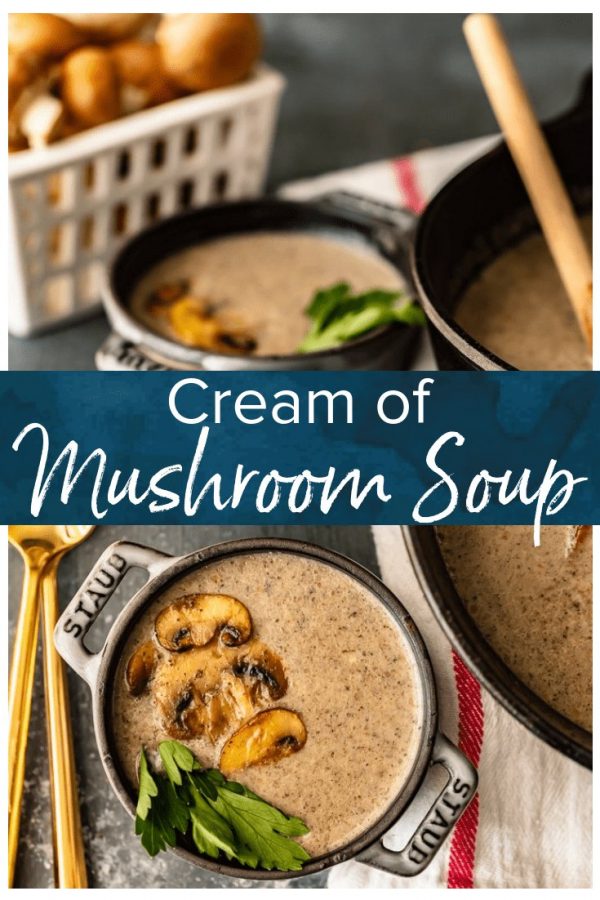 Cream of Mushroom Soup is not only a delicious soup that’s perfect for eating on its own, it’s also a common ingredient in many amazing dishes. This Homemade Cream of Mushroom Soup recipe is way better than the store-bought stuff in a can, and this can easily be prepared and saved ahead of time to use in any recipe! 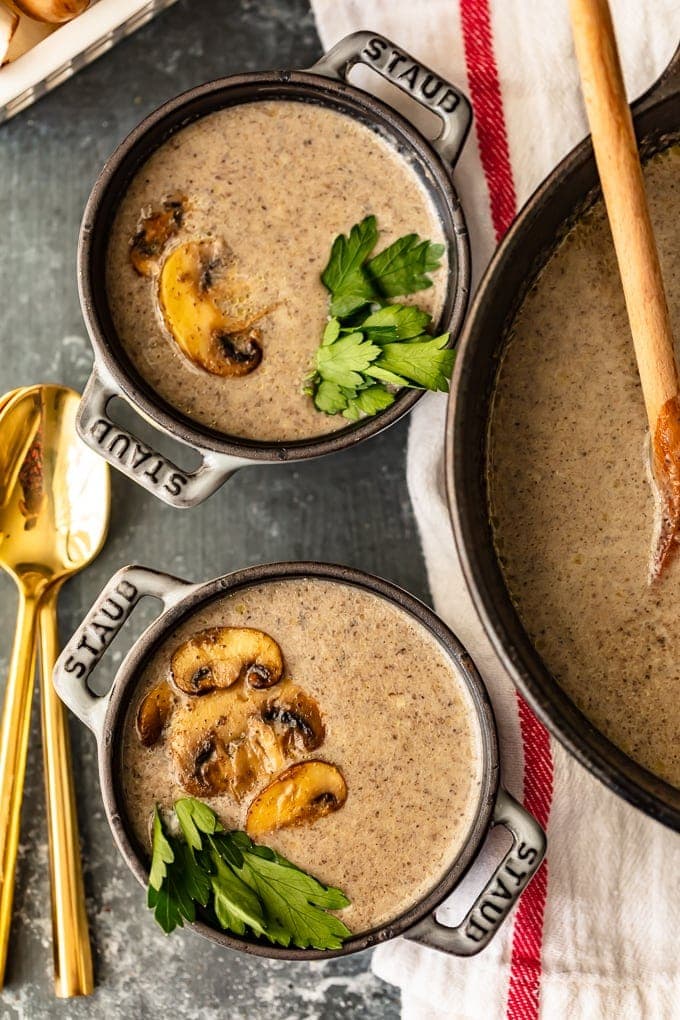 Homemade Cream of Mushroom Soup is the best soup recipe for simple meals, eaten alone, as a side, or as an appetizer. You can also make this mushroom soup to save and use in other recipes!

I love this stuff as an appetizer before a nice steak dinner, as a side dish along with a sandwich or salad, or even as a whole meal served with hearty bread. Mushrooms, shallots, garlic, half & half, and more combine to make something so simple yet so tasty!

This homemade soup recipe is also the perfect thing to make for all of those recipes with cream of mushroom soup in them. SO many of the best dishes call for it in the recipe, especially holiday recipes! I mean, you can’t make green bean casserole without it, so that makes Thanksgiving impossible without this soup!

And why buy a can of it when you can make cream of mushroom soup at home? Just prepare a batch of this soup, freeze it, and you’ll have some on hand any time you see it on your ingredients list.

Here’s what we’re going to talk about in this post:

No matter how you eat it, this soup recipe is a definite necessity in the kitchen. Make some ASAP to start preparing for the fall cooking season!

Learn how to make cream of mushroom soup with this simple Homemade Cream of Mushroom Soup recipe. You’ll use this recipe all season long! 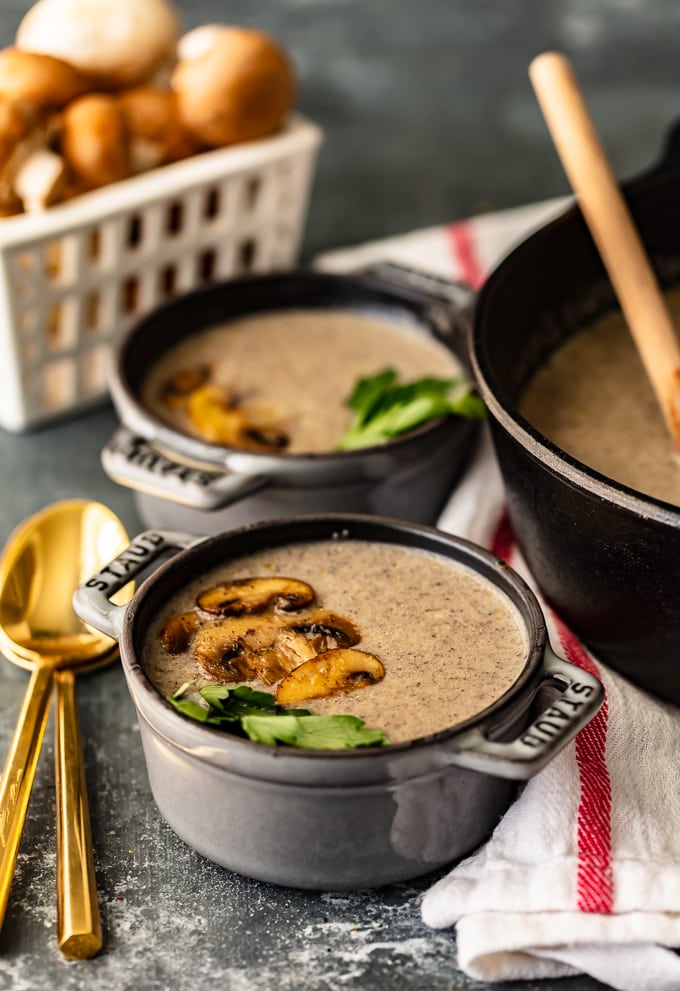 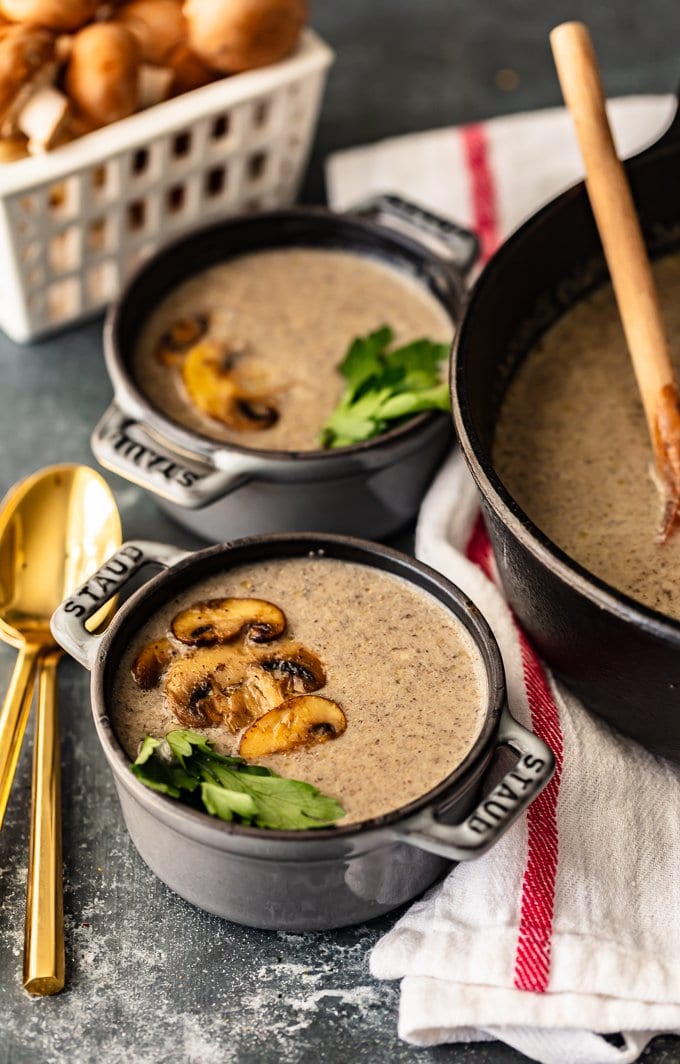 Since most of use are probably used to buying cans of cream of mushroom soup for cooking (I know I used to), you might be wondering what exactly is in this soup.

Mushrooms are the obvious ingredient, but it takes a few more things to turn this into a creamy, savory soup that tastes good on its own and as a must-have cooking ingredient.

Can’t you just taste the earthy flavor after reading that ingredient list? Yum!

How to Make Cream of Mushroom Soup

Lucky for all of us, this homemade cream of mushroom soup recipe is easy. A simple recipe for a simple soup! Maybe not as easy as opening a can, but it tastes infinitely better.

The general outline of the recipe is just adding in your ingredients, letting the soup simmer, using a blender to make it extra smooth and creamy, and then finishing it off by adding in the half & half. Nothing complicated here! Check the recipe card below for detailed instructions.

How to Serve Cream of Mushroom Soup

When you’re ready to serve the soup, have some fun with it. Add some fresh thyme leaves on top, slice and saute some mushrooms to throw in for texture, and add in a handful of these homemade croutons for the crunch.

If you really want to get fancy, add that perfect layer of cheese on top like you would with French Onion Soup (or like we did with our Parmesan Meatball Soup).

After ladling the soup into oven-safe bowls, sprinkle on the cheese (don’t be shy), and put it under the broiler until it gets melty, bubbly, and starts to brown.

Cheese makes everything better, after all! And don’t forget some good crusty bread to serve along with it. 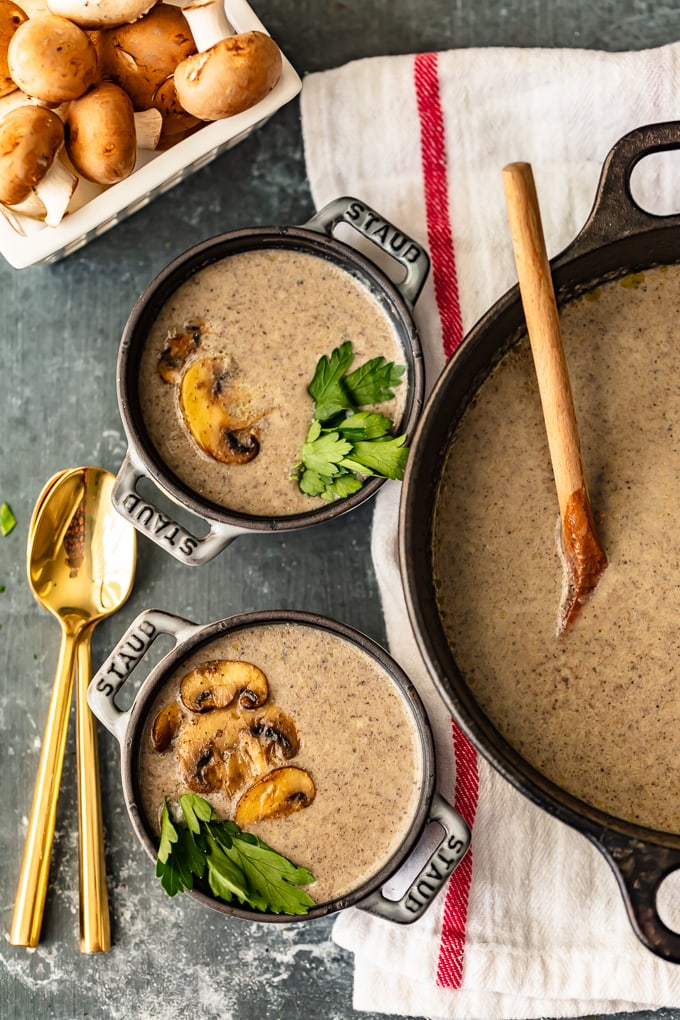 How to Store Homemade Cream of Mushroom Soup

Whether you plan to eat it as a soup, or just use it as a cooking ingredient, you can easily store your homemade cream of mushroom soup for later use.

If you just want to keep it for a few days, up to 3 days in the refrigerator will work just fine. This is a great option if you want to make it a couple days before Thanksgiving and then use it in a few recipes.

To freeze cream of mushroom soup: First let the soup cool in the refrigerator for a few hours or overnight, and then transfer it into freezer-safe bags.

I recommend pouring it into quart-sized bags so that it is portioned off ahead of time, making it easy to store and easy to grab and thaw for individual recipes. It will keep in the freezer up to 3 months.

Recipes with Cream of Mushroom Soup

A lot of people think of cream of mushroom soup as an ingredient before ever thinking of it as an actual soup to eat on its own. It’s in so many classic dishes because it has such a great flavor and a beautifully creamy texture.

It adds a nice herb-y, savory element to so many recipes! So you can use this homemade recipe in place of the canned stuff for any recipes with cream of mushroom soup in them.

Here are a few favorite recipes with cream of mushroom soup: 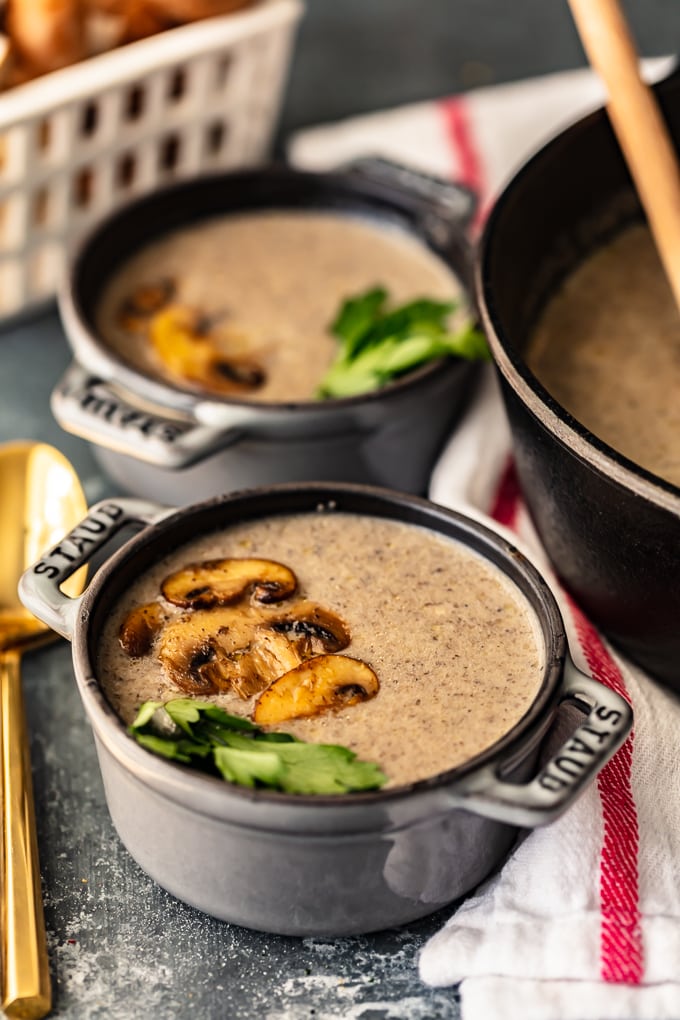 Add this Homemade Cream of Mushroom Soup recipe to your must-make list! Whether you eat it for dinner, as an appetizer, or just use it as an ingredient in other recipes, you’ll surely find yourself making this over and over again.

See the recipe card below for details on how to make Cream of Mushroom Soup. Enjoy!

If you like this recipe, try these other easy soup recipes: 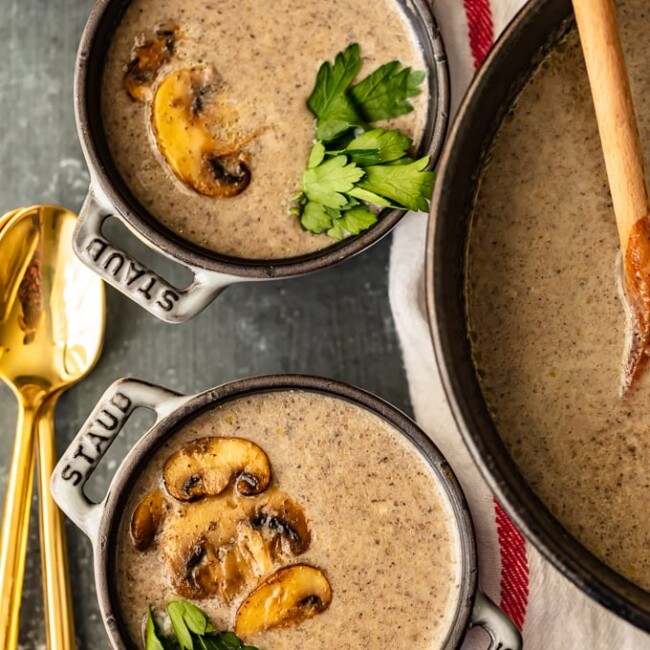 Serves7 cups
Print Rate Save Saved!
Cream of Mushroom Soup is not only a delicious soup that's perfect for eating on its own, it's also a common ingredient in many amazing dishes. This Homemade Cream of Mushroom Soup recipe is way better than the store-bought stuff in a can, and this can easily be prepared and saved ahead of time to use in any recipe! 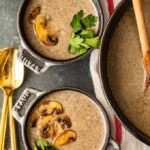 Hi there! I plan to make this to go with your green bean casserole. I’d like to know how many cans this recipe is equivalent to? I need enough to make what is equivalent to 4 cans. Thank you!!

Can this be made with ‘beef’ broth in place of the chicken broth?

It may alter the taste slightly, but if you do try it let me know how it turns out!

Hello! What a great recipe, thank you! I’m making this today with your green bean casserole dish for thanksgiving tomorrow :) The green bean casserole recipe calls for 2 cans of this soup, but this dish is measured in cups. How many cups would you say are in “2 cans” ? Thanks again!

Hi Jean! I’m so excited you’re making both recipes! It would be about 4.75 cups of the homemade soup. Have a great holiday! xo