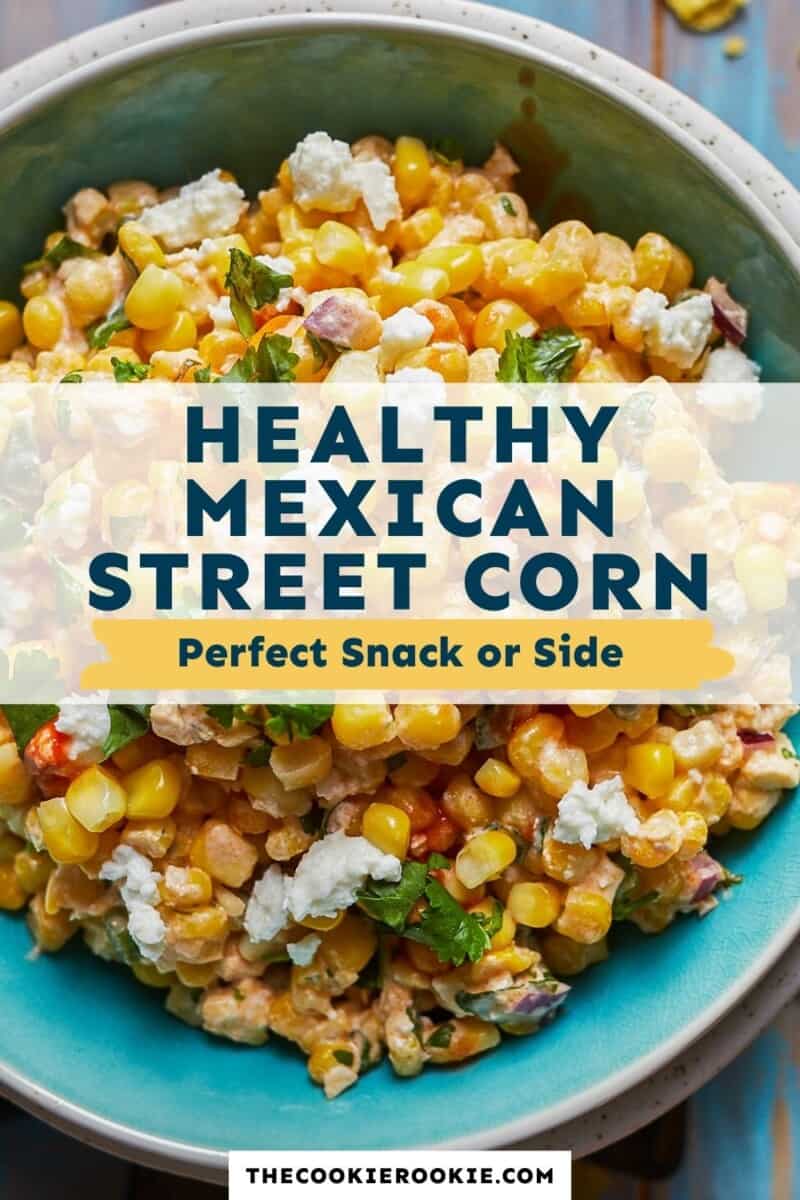 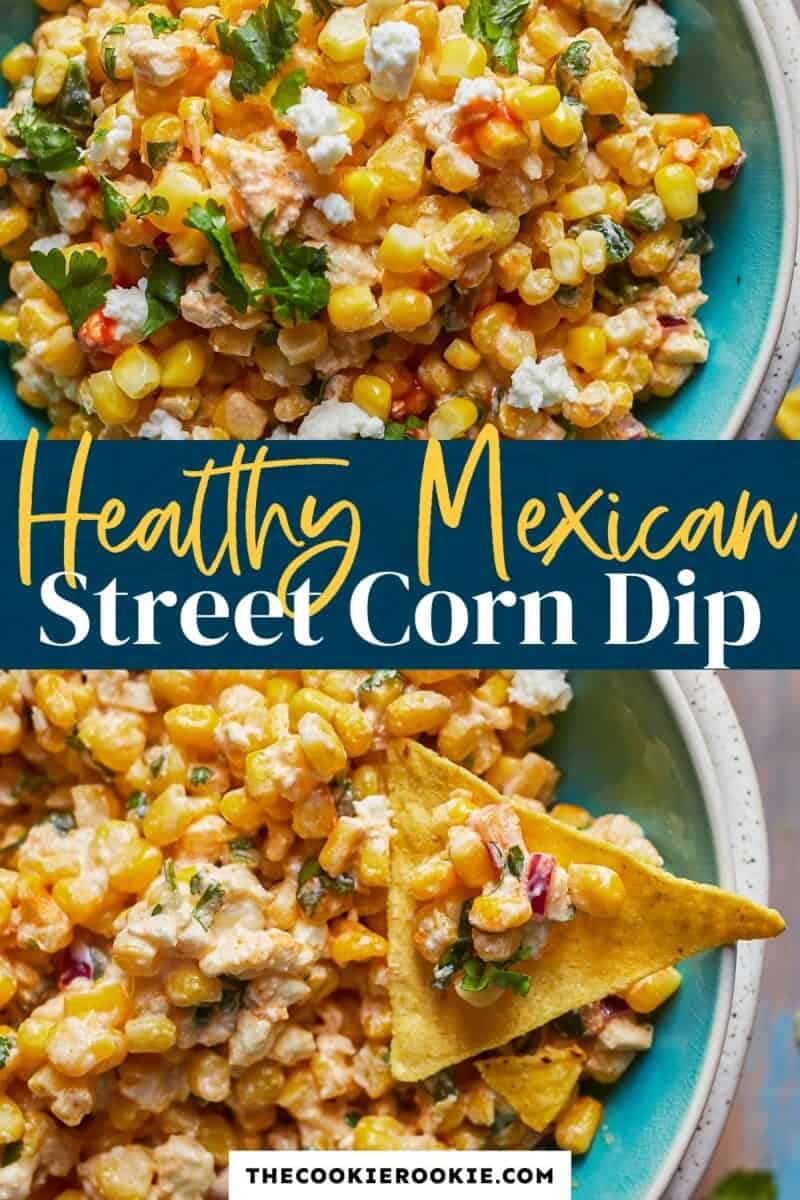 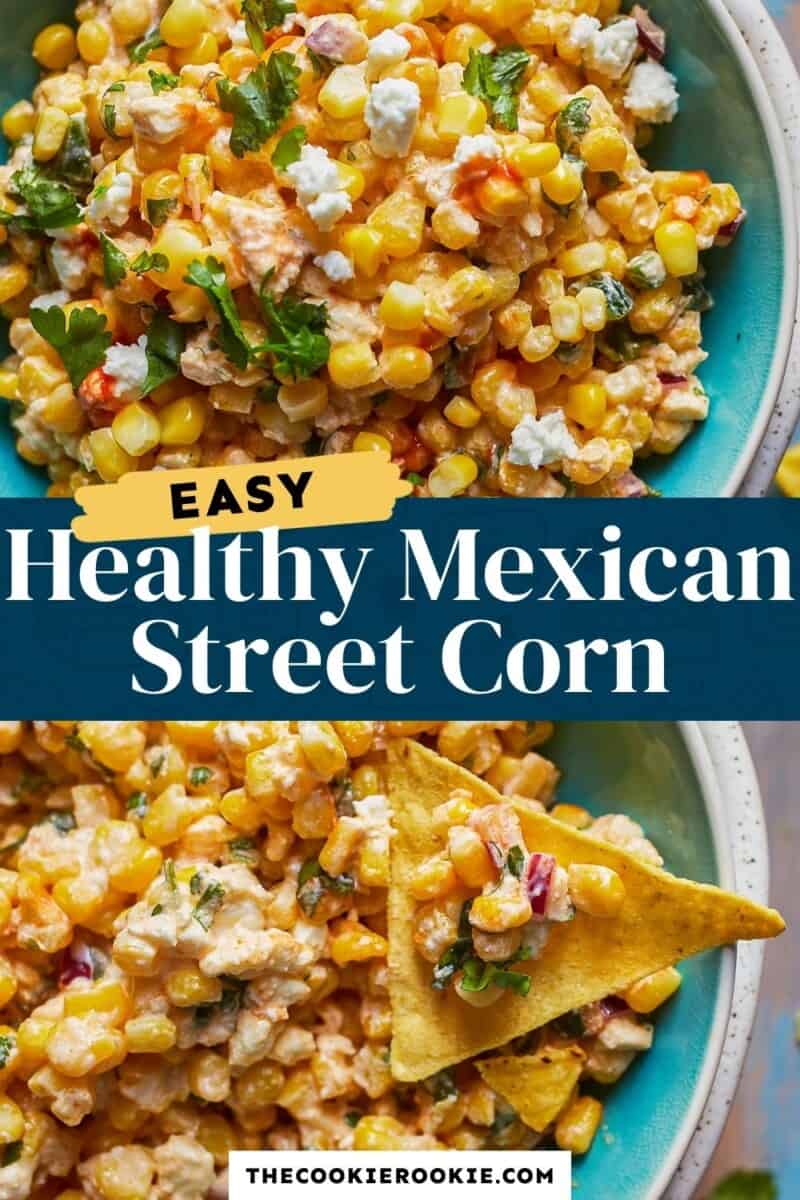 This Mexican Street Corn recipe is a healthy version of a restaurant favorite. I took the corn off the cob, switched out some ingredients (no mayo or sour cream), and kept the same delicious flavors to create this healthy Mexican Street Corn Salad recipe that works as an awesome appetizer, side dish, or snack!

One of my favorite and most popular recipes on the site is my Mexican Grilled Corn on the Cob. It’s delicious, flavorful, and surprisingly healthy! It’s not quite warm enough to bust out the grill, but that doesn’t mean we can’t enjoy this favorite recipe year round.

I took those flavors and turned it into sort of a street corn salad version that’s easy to make and easy to eat. It’s basically just Mexican street corn off the cob, and I substituted some ingredients to make it a little lighter.

I also wanted to give this recipe an extra kick, so I added in some wing sauce and included the jalapeno seeds. If you’re not a fan of the spice, you can easily leave those two things out. It’s just as good mild as it is hot! (Maybe a tad more boring, but I won’t judge!)

This is a healthy Mexican side dish to serve with tacos and enchiladas, but it also works as more of a dip or appetizer too. I love anything that can double as a side dish and as a dip. Doubles the opportunities to make this delicious dish!

Most street corn recipes include mayonnaise or sour cream, but I wanted to swap those things out for lighter ingredients that would turn this into a healthy side or appetizer. Overall this is a really simple recipe, so it’s the ingredients that make it so delicious!

What is Mexican street corn made of?

Also known as Elote, it’s typically made with mayonnaise or sour cream, cheese, lime, and chile powder. This version has a few differences:

Mexican Side Dish or Dip

I got the idea for this Healthy Mexican Street Corn when we ate at one of my favorite St. Louis restaurants, Mission Taco Joint.

This side dish is one of my favorite things to order, so I wanted to make my own version at home. It’s not exactly a copycat recipe, but it’s definitely inspired by it.

I like that this recipe can be eaten in a lot of different ways.

It works as an appetizer just as well as a side, so keep this recipe on hand!

This recipe is basically just: brown the corn in a skillet, mix it with all the ingredients to make a sort of corn salad, then EAT! So simple, so delicious, and perfect for so many occasions (especially Cinco de Mayo). 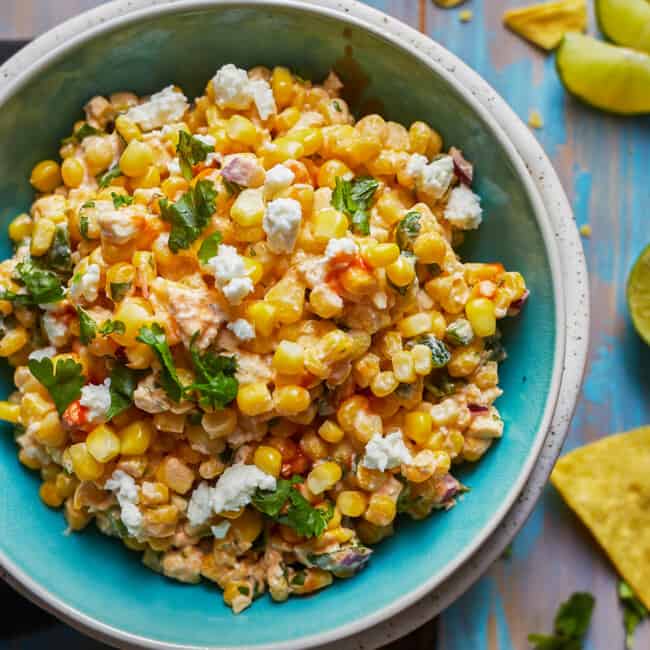 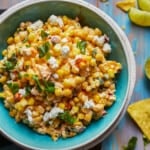 Can this be served warm as a side dish or is it best kept cold?

I usually serve it hot!

How many people would this recipe before

I made this for a side dish for 4th of July. Excellent!!, so easy, and was gone in a flash! I’m not wild about feta, and couldn’t find Cotija, so used Queso Fresco. Very good! Can’t figure out why I’ve never tried Frank’s redhot sauce before, but loving it now! Will definitely make again, both as a side and as a dip!

Thanks for sharing, Chris!

I need to double the recipe. It was really good. Not exactly like the mexican corn I’ve had, but really good. It was gone before I thought to take a picture. You are right about the red hot sauce. Sometimes the chile powder leaves a harsh taste, not the hot sauce. It added that little extra that sent it over the top for me. Thanks for the great recipe.

Thanks for stopping by and sharing, Barbara!

Have made this numerous times….we use it as a side dish and it is amazing.

I’m glad you all love it so much!!

Excellent dip, easy to make and very tasty. thank you

You’re welcome! I’m so glad you love it!

Love your recipes. Can’t wait for you book!

Recipes are so very hard to get to.

I’m sorry! It should be right there if you scroll down.