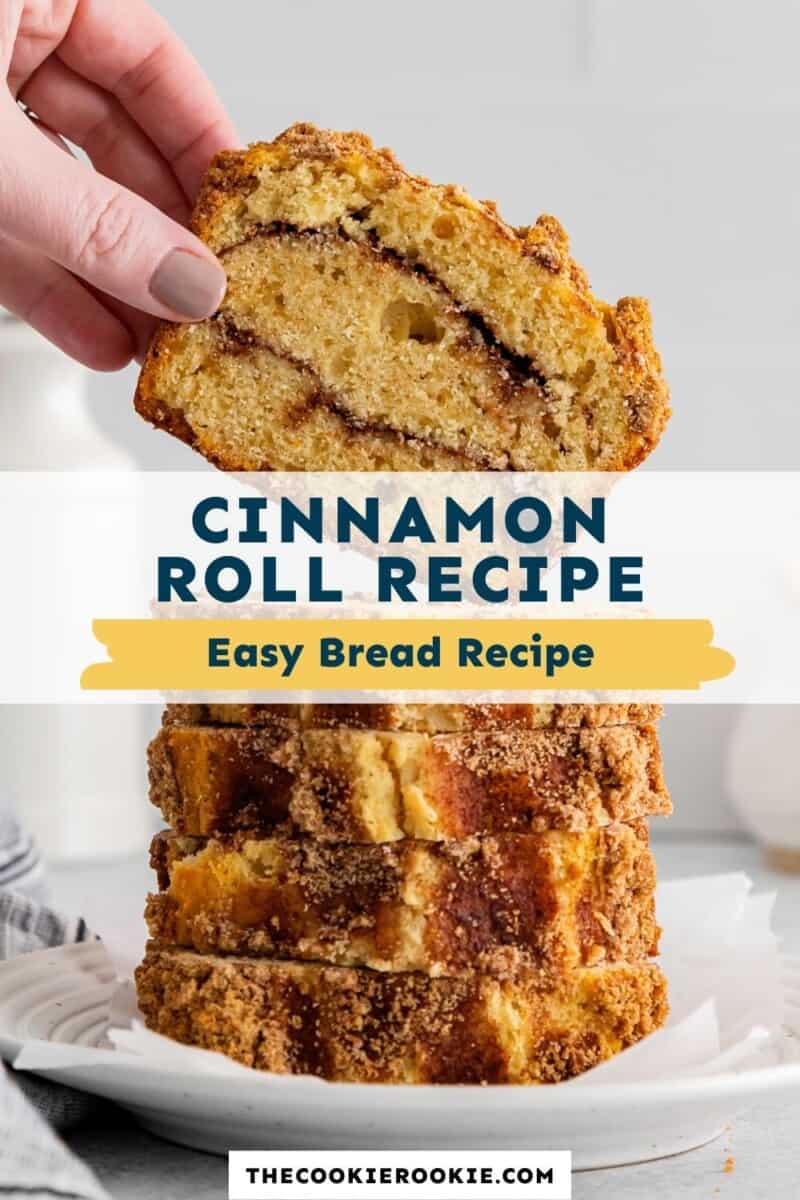 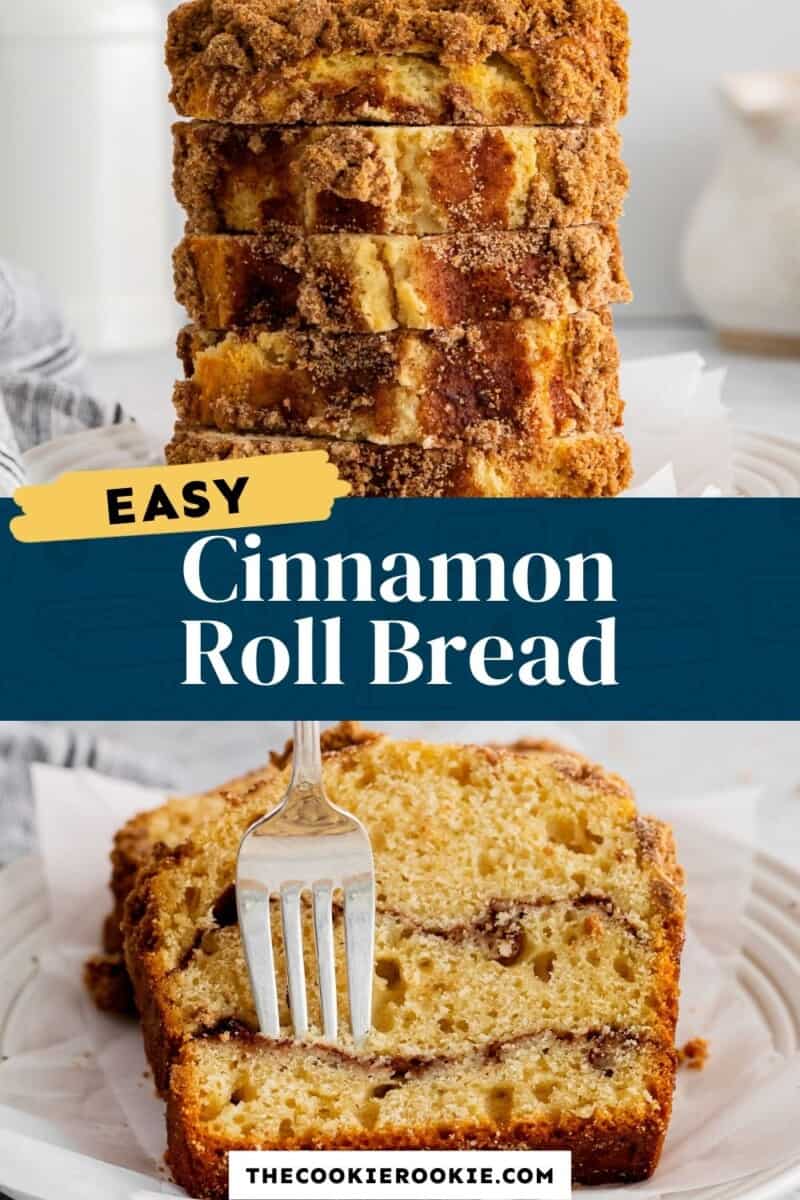 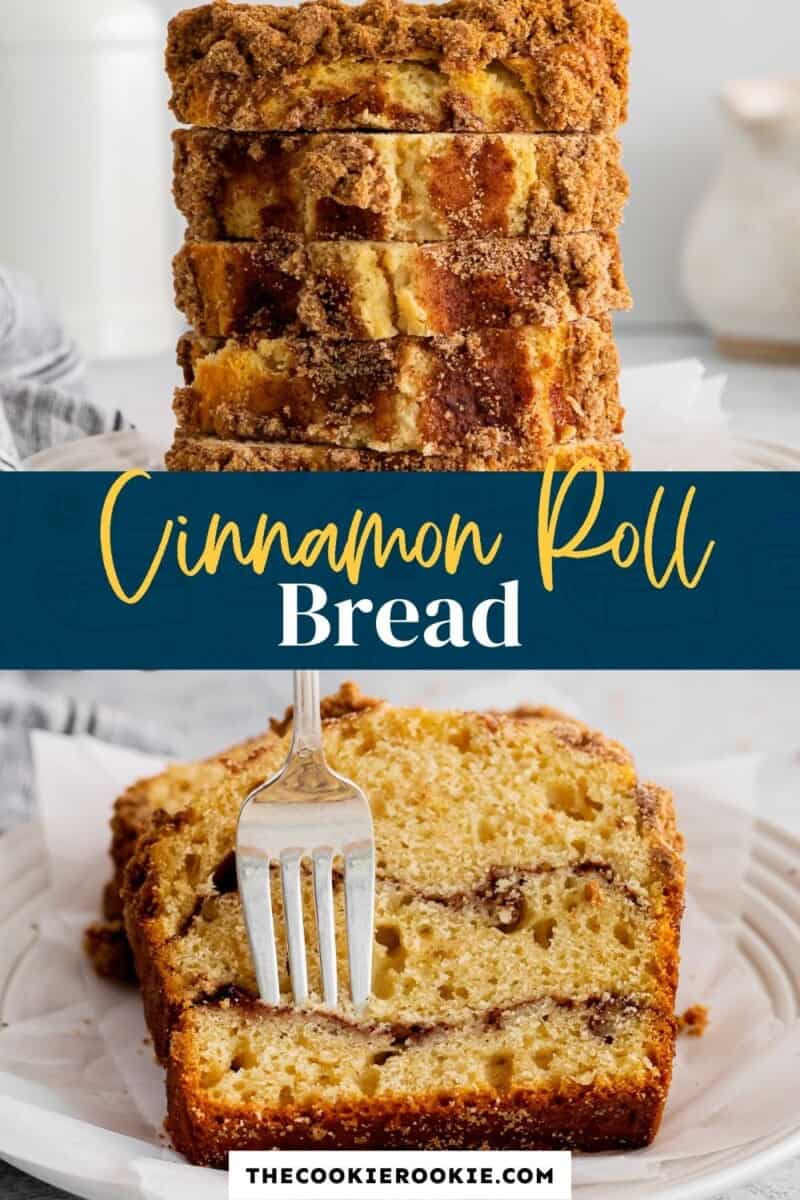 This Cinnamon Roll Bread is a soft, moist loaf of loveliness! Swirls of cinnamon crowned with a crunchy streusel topping, it’s great for breakfast, Easter, any time!

Get ready for a cinnamon explosion! This cinnamon swirl bread looks great, tastes amazing and will fill your house with the most heavenly scent! Great for novice and experienced bakers alike, this gorgeous cake delivers a perfectly balanced hit of cinnamon, all wrapped up in a moist and fluffy loaf.

It’s like your favorite homemade cinnamon rolls in every slice. You have to give it a try!

Looking for more breakfast ideas? Why not also try my English Muffin Breakfast Pizza and my Maple Syrup Granola.

With its mix of textures, from the moist cake loaf to the streusel topping, this is pure pleasure in every bite!

How to Make Cinnamon Roll Bread

How do I know when cinnamon roll bread is done baking?

This bread is done baking when a toothpick inserted into the center comes out clean.

What can I use in cinnamon quick bread instead of sour cream?

Use an equal amount of plain Greek yogurt or buttermilk.

Can I make this cinnamon roll loaf gluten free?

While I haven’t tested it, try replacing the all-purpose flour with an equal amount of a 1:1 gluten free flour replacement (like Cup4Cup).

This easy loaf cake pairs well with a morning coffee (like this honey almond milk flat white), after dinner coffee, or glass of milk!

Store leftover bread in an airtight container at room temperature for up to 3 days or in the refrigerator for up to 5 days.

To freeze cinnamon roll bread, tightly wrap full loaves or individual slices in plastic wrap, place into an airtight container, and freeze for up to 3 months.

For a little something extra, drizzle vanilla icing onto this cinnamon roll bread before serving! In a small bowl, combine 1 cup of powdered sugar with 1-2 tablespoons of milk and 1 teaspoon of pure vanilla extract. For a thicker glaze, use less milk. For a thinner glaze, use more milk. To add a little extra tang, whisk in 2 tablespoons of cream cheese.

This delicious cinnamon roll bread is made from kitchen staples and comes together so easily! Plus it’s so versatile, you can freeze it, top with some icing, have it for breakfast, a snack or dessert. You’ll find this such a usual addition to your cooking repertoire!

Serves8 slices
Print Rate Save Saved!
This Cinnamon Roll Bread is a soft, moist loaf of loveliness! Swirls of cinnamon crowned with a crunchy streusel topping, it's great for breakfast, Easter, any time!

For the Cinnamon Streusel

This website is a waste of time, it takes so, so long to get to the recipe and then it suggests dough that is bought. Wasted 10 minutes of my life that I’ll never get back! Grrrrrrrrr!

I’m sorry you didn’t enjoy the post, Mike. I do have a variety of recipes for all different skill levels, and I hope you’ll check out a few more! If you’re looking to skip straight to the recipe, there’s a button in the top right corner that says “⬇ Recipe”. If you click on that, it will skip over the blog post and take you directly to the recipe card!