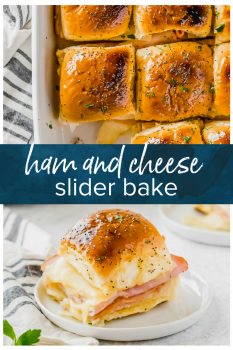 Ham and Cheese Sliders are such a simple recipe, but they’re perfect for a quick lunch or snack. I am constantly on the hunt for EASY and delicious meals, and I found a new favorite! These BAKED Ham and Swiss Sliders were done in under 20 minutes, and they are surprisingly satisfying. These Hawaiian Roll Sliders are a great family meal! 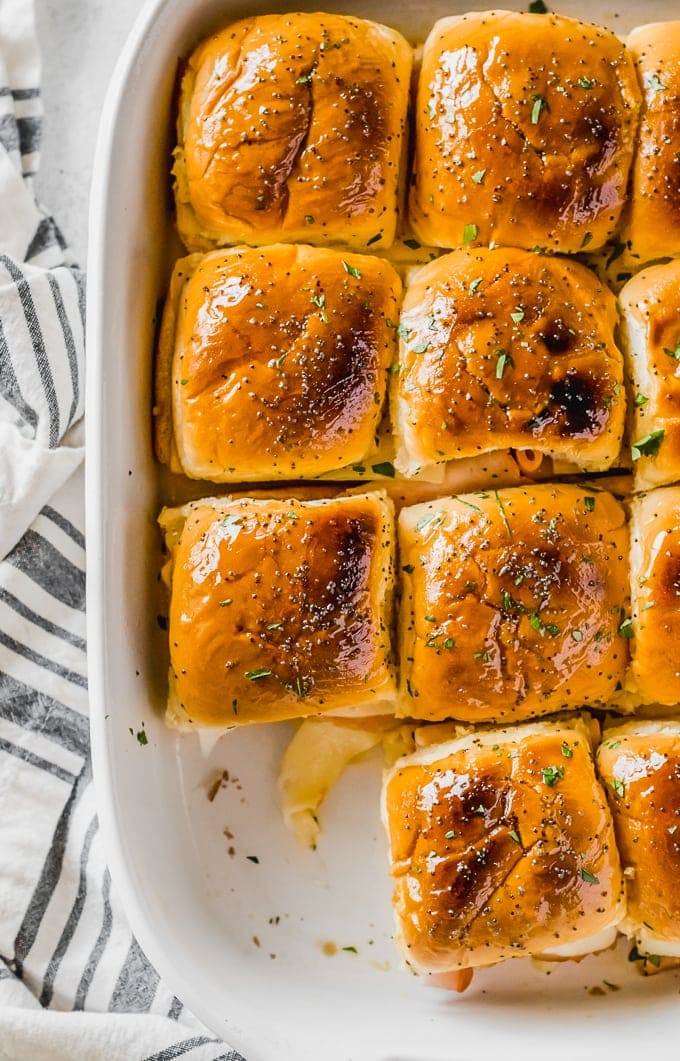 Ham and Cheese Sliders on Hawaiian Rolls are an easy and quick meal to make for the whole family. I love these Ham and Swiss Sliders, and kids do too!

Ham and Cheese Sliders on Hawaiian Rolls are something I’ve seen all over Pinterest. Since I’m always on the hunt for quick meals likes this, I’ve wanted to try them for a while. My friend Kathryn made similar Ham and Swiss Sliders for a Trivia Night and I was hooked. They are so simple and so delicious. So this is my version of the Hawaiian Ham and Cheese Sliders.

This Ham Sliders recipe checks all the big boxes: they are quick, easy, super delicious, and they re-heat well. They make an easy lunch when you just want something that’s simple but tastes GOOD. These are cheesy, savory, and a little bit sweet, and I think that’s the perfect combination.

These hot Ham and Swiss Sliders are another Kid-Friendly recipe too. They’re the perfect size for your small eaters. But the flavor is good enough for all of us hungry adults!

This Hawaiian Roll Sliders Recipe is the perfect simple meal to make for your family. Kids and adults alike will love these little Ham and Swiss Sliders! 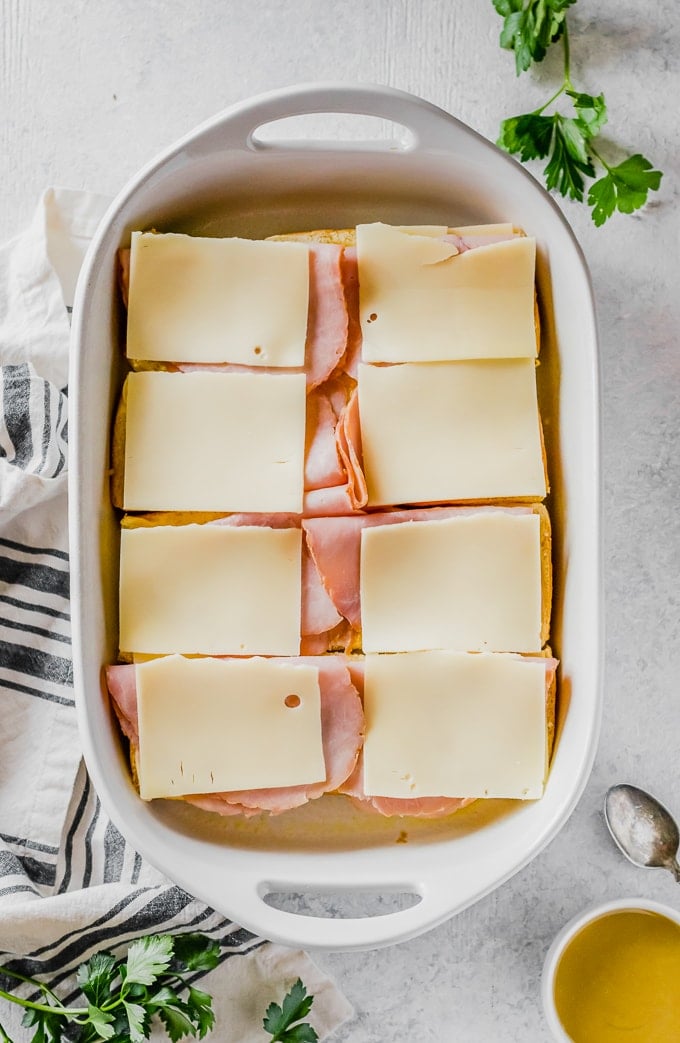 These Hawaiian Ham and Cheese Sliders are so little yet so tasty! Using Hawaiian Rolls for these sliders was a no-brainer. They’re the perfect size for a mini sandwich, and the rolls add just the right amount of sweetness into the mix. I like to pick up a package of these little rolls because you never know when you’re going to need a quick meal like these Ham and Swiss Sliders.

Yes, Ham and Cheese Sliders on Hawaiian Rolls was a match made in heaven!

These little beauties have (semi) homemade Honey Dijon on the inside and are topped with creamy Poppyseed dressing on top. They’re like little flavor bombs. These ham sliders are just SO good I tell you. I’m not sure why, but they’re way more amazing than you might think considering how simple they are.

One of the ‘food blogger curses’ is I can never make things twice. That seems like such a waste of time and energy when I’ve got to put out new recipes. But these Hawaiian Ham and Cheese Sliders? These are something I’ll be making again and again. If you invite me to a party in the near future, don’t be surprised if I show up with a big batch of these sliders. 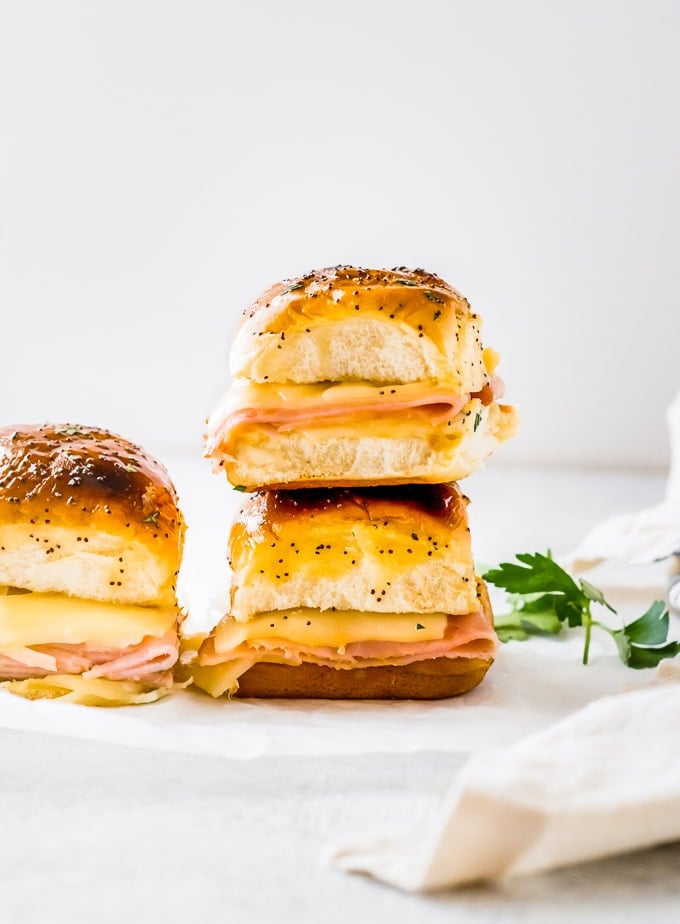 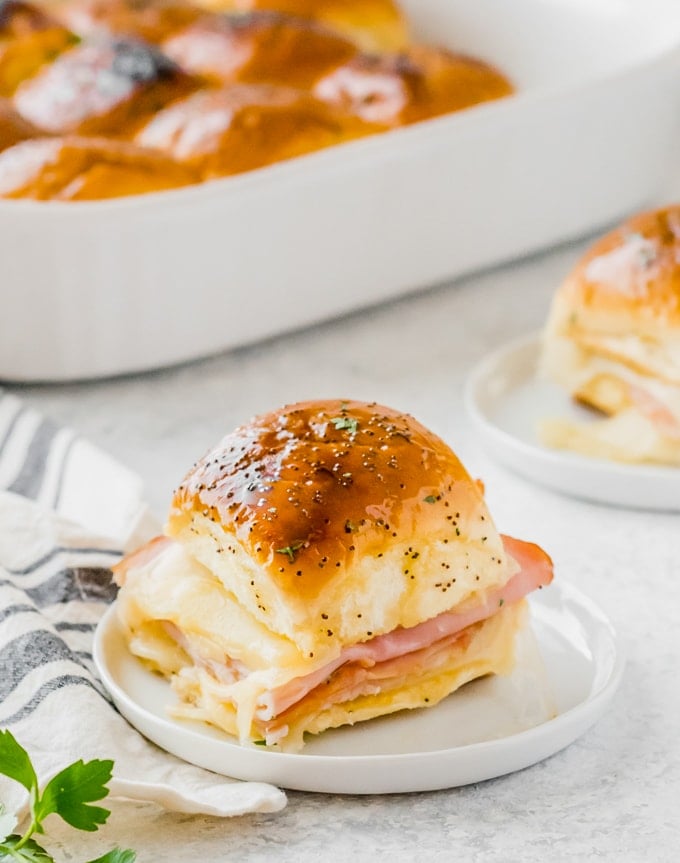 Ham and Swiss Sliders are a tasty Kid-Friendly Recipe

As you all know, creating kid-friendly recipes is important to me. I am a mom, after all! I need recipes that are really easy to make. I need simple meals that won’t scare away children with weird ingredients. And (most importantly) I need recipes that I will love to eat just as much, because I don’t want to sacrifice flavor. I’ve still got some time before Henry starts eating the same meals as us, but when he does, I’ll be ready with these little ham and swiss sliders.

I mean, what kid doesn’t love ham and cheese? These are definitely an elevated version, perfect for adults. But kids will still love these ham and cheese sliders just as much. If they’re a bit picky, you can always leave off the honey dijon mustard and Poppy seed dressing on a couple of the sandwiches. They’ll get a tasty hot ham and cheese slider, and you’ll get your tasty Hawaiian Ham and Cheese Sliders. It’s a win-win! 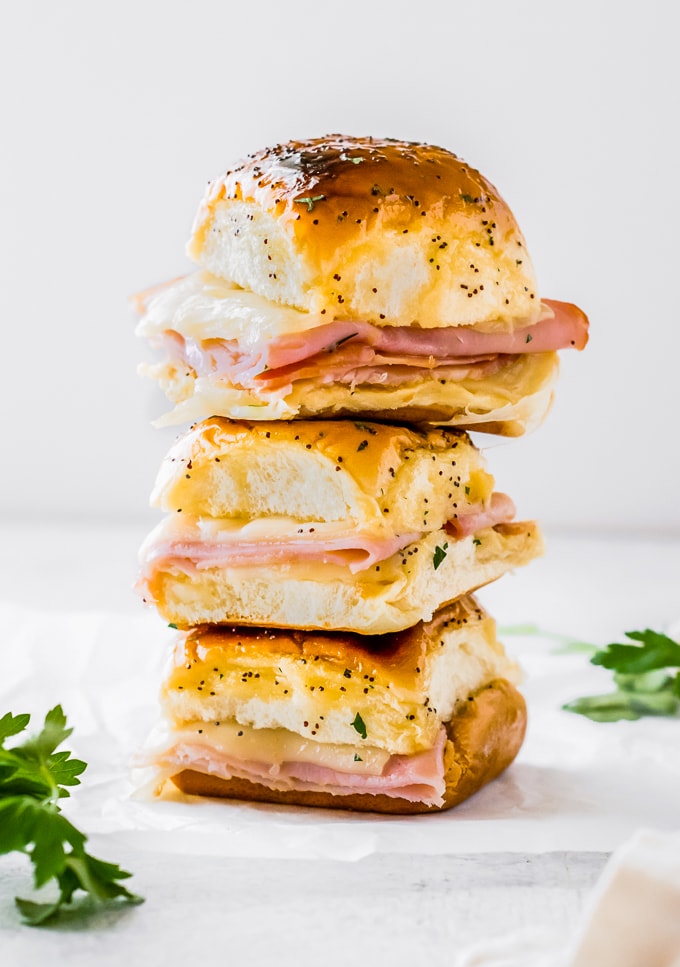 How to Make Ham and Cheese Sliders – Step by Step

These Ham and Swiss Sliders are so easy to make. You just need a package of Hawaiian Rolls, ham, Swiss cheese, a little bit of honey and some dijon mustard, and poppyseed dressing.

Now serve your delicious Hawaiian Ham and Cheese Sliders with a side of baked sweet potato chips, Parmesan potato wedges, or homemade Doritos. 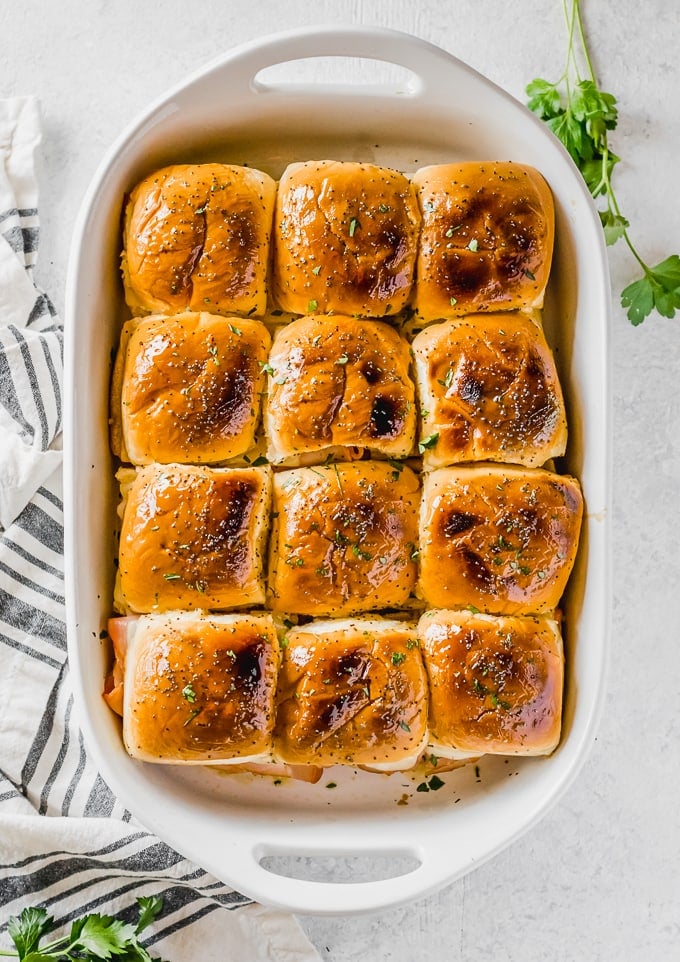 You and your family will loves these Ham and Cheese Sliders on Hawaiian Rolls. They’re simple and absolutely delicious. I love how making Baked Sliders makes everything hot, juicy, and extra delicious. This is such a great recipe for feeding a crowd! Make it in other flavor combinations and get creative! The sky is the limit.

Watch the video or See the recipe card below for details on how to make this Ham and Cheese Sliders recipe. Enjoy!

If you like these ham sliders, then try some of these other kid-friendly recipes: 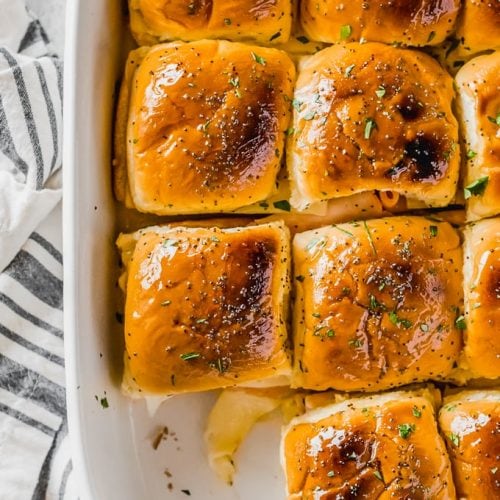 Course: Sandwiches
Cuisine: American
Prep Time: 10 minutes
Cook Time: 18 minutes
Total Time: 28 minutes
Servings: 6
Calories: 445kcal
Author: Becky Hardin - The Cookie Rookie
Ham and Cheese Sliders are such a simple recipe, but they're perfect for a quick lunch or snack. I am constantly on the hunt for EASY and delicious meals, and I found a new favorite! These BAKED Ham and Swiss Sliders were done in under 20 minutes, and they are surprisingly satisfying. These Hawaiian Roll Sliders are a great family meal!
Print Recipe Rate this Recipe Pin Recipe

Did you make this recipe? 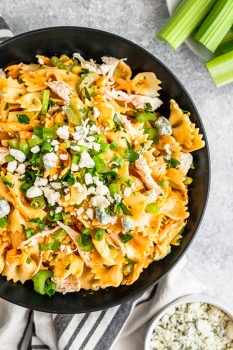 Subscribe to have posts delivered straight to your inbox!!

PLUS get our FREE ebook, Favorite Easy Chicken Dinners.

Yum!! I’m glad you enjoyed them!

Made these last night with regular dinner rolls and shredded Swiss..awesome.. the melted butter sauce is amazing. Had them today as leftovers and very good nuked for 25-30 minutes .. highly recommended.. very good!

What a great idea! I’m glad you enjoyed them!!

These sliders are so good! I made the ham and cheese and also sausage and cheese. We took them on our road trip, so we wouldn’t need to stop for breakfast.

Oh joy!! Made these this evening!! Only thought of sliders as wonderful little hamburgers! Not any more. Great recipe!! Will be adding this little gem to Sport’s Night, church pot lucks, and those Friday evenings when we want something fast and delicious! A Keeper!!
Thank you to our Recipe queen!! BTW, I used the entire slice of cheese. Same with the ham. Just folded it over twice…to fit. Yum.

Love the way you think!

That makes me so happy!

My family would eat these every week, they love them so much!!

Such a delicious lunch! Gotta love quick and easy!

Hawaiian rolls are a favorite here! These sliders disappeared in no time! So delicious!

These are delicious and a great way to use Christmas ham!

we had these last night at a dinner party but they used butter and Italian dressing instead , was soon good

These are quick and easy weeknight meal fixes for those who have lots of children’s activities during the week. Love these.

G’day! Always a winner in our house!
Cheers! Joanne

Oh, wow! These look so scrumpcious and easy to make to boot! Thanks for sharing :)

These look fantastic!! We love anything ham at our house!!

These would be great for game day or a fancy party. Love it!

These sound so good, one of these days I need to try them!

These look tasty! Perfect for an afternoon get together!

Easy, simple and yummy! My kid of meal.

oh darn!! they are so dang tasty, but you’re right, you’re making them much healthier by using wheat rolls! Thanks so much for stopping by :)

Oh these look so good! I can’t find hawaiian rolls or loaves in the UK – it’s a bummer, but probably better for me to stick to wheat bread (which they just call brown bread here) anyway.

what do you use in your sauce? they’re so easy, I want to try lots of different kinds!

Meg @The Housewife in Training Files

We make variation of these and now everyone requests them from me for parties! Our sauce is a tad different but i bet these are just as good!

What a yummy and easy dinner idea!! Sounds like it needs to go on the menu soon!

Hi, I’m Becky Hardin. Here at The Cookie Rookie you will find trusted and easy recipes for every occasion. Let's cook!