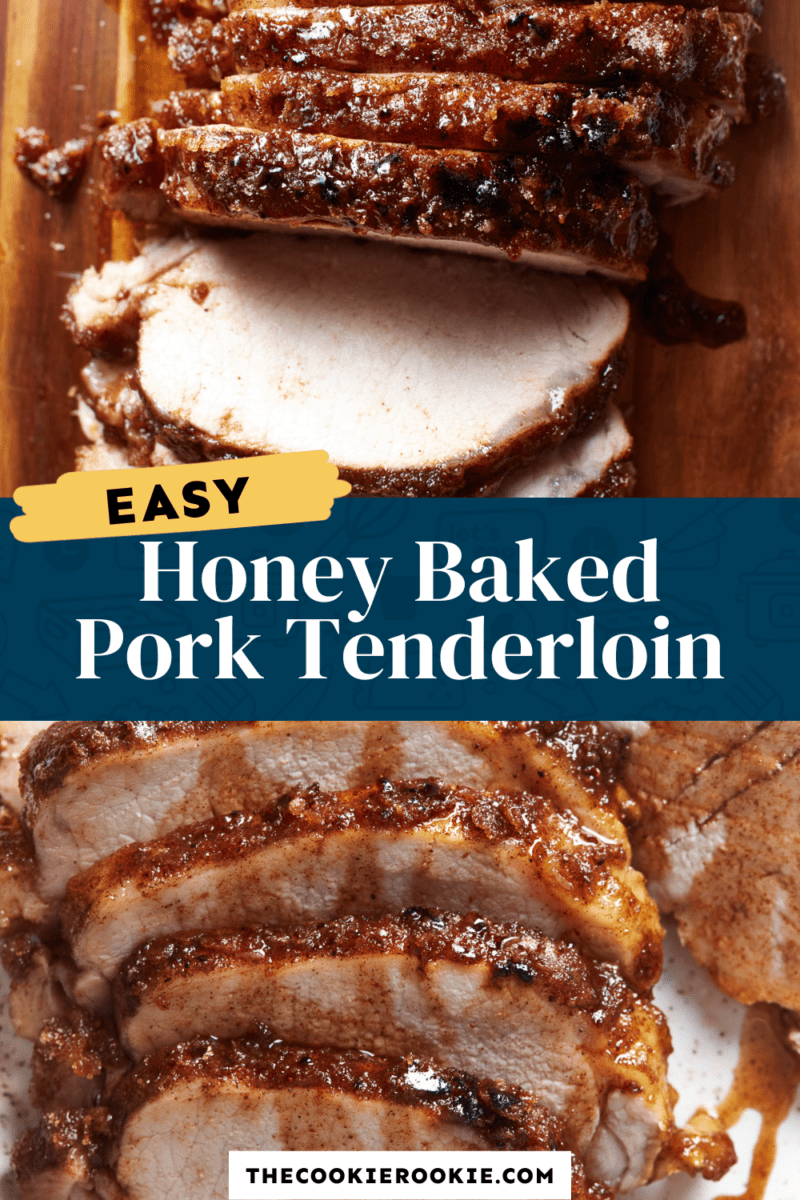 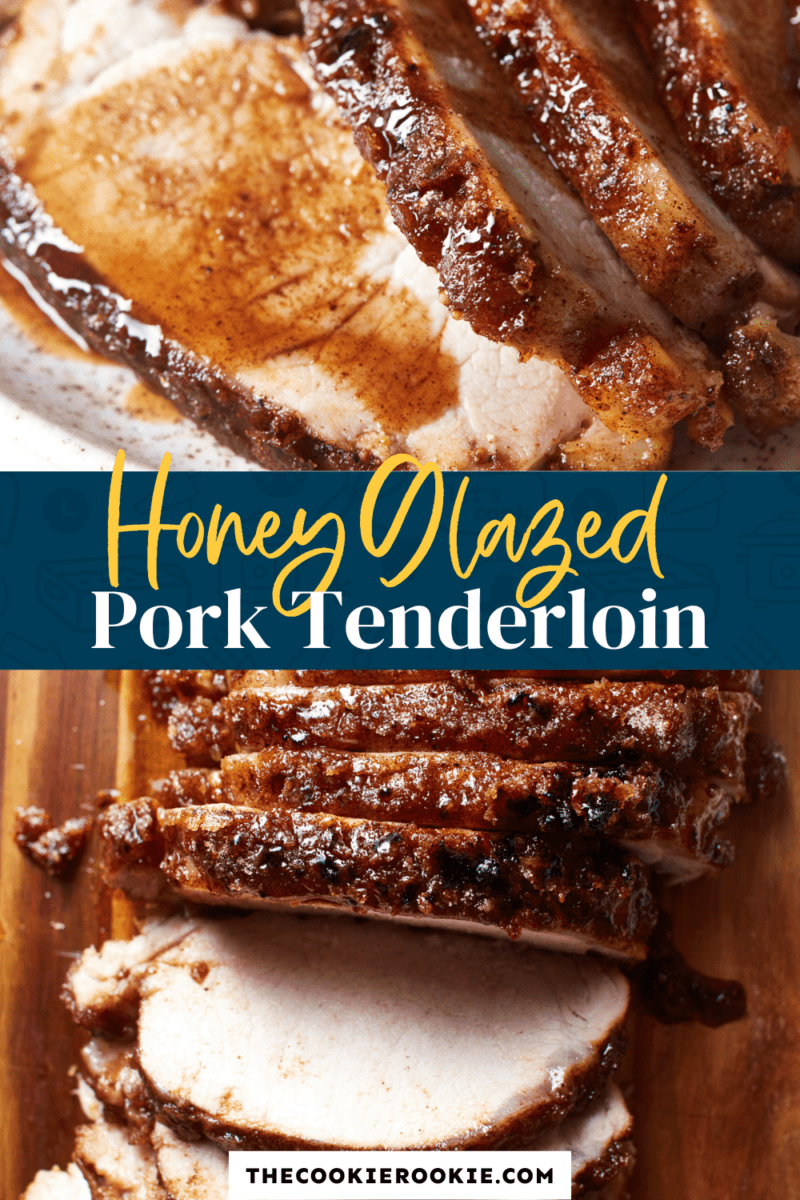 There is so much flavor in this baked pork tenderloin, starting with the honey mustard glaze marinade and ending with the spice-filled dry rub we use to coat the pork. It’s flavorful, tender, and easy to make. This beautiful honey mustard pork recipe is sure to impress everyone who tries it!

This baked pork tenderloin recipe is inspired by the flavors of a classic honey baked ham! It’s baked to perfection with a honey glaze, and finished off with a caramelized coating.

Use hot honey in the glaze for a little extra heat!

How much pork tenderloin should I plan on per person?

Estimate about ⅓-½-pound of pork per person. Some will eat more, some less. But a 3-pound tenderloin should serve about 6-8 people.

How long does pork tenderloin take to bake in the oven?

You’ll want to use your thermometer as a final guide, but generally this tenderloin should take about 1½-2 hours to roast at 300°F.

At what temperature is pork tenderloin done cooking?

Pork should reach an internal temp of 145°F before consumption. However, it will continue to cook a little after removing it from the oven, so you’ll want to take it out around the 140°F mark.

What kitchen torch do you recommend?

We love this Kitchen Torch from Amazon (affiliate link). It’s well-priced, easy to use, and pretty heavy-duty. It does a great job!

Can I make this recipe ahead of time?

The tenderloin benefits from marinating in the glaze (refrigerated) up to 24 hours. So you can prep the pork a day ahead of cooking, then pop it in the oven to bake.

What is the best way to reheat pork tenderloin?

The best way to reheat it is the same way you originally cooked it. Set the oven to 300°F, place slices (or remaining tenderloin) in a baking pan, and cover with foil. Bake until it reaches 140°F. You can add more apple cider/juice into the pan to help keep it moist.

How to Store and Reheat Oven Baked Pork Tenderloin

Store leftover baked pork tenderloin in an airtight container in the refrigerator for up to 3 days. Reheat in a 300°F oven covered with foil until warmed though.

Freeze baked pork tenderloin in an airtight container or Ziplock bag for up to 3 months. Let thaw overnight in the refrigerator before reheating.

What to Serve with Honey Glazed Pork Tenderloin

This baked pork tenderloin goes so well with all the classic side dishes. I love serving it along with creamy mashed potatoes, and a green veggie (like green beans or asparagus). But it also tastes amazing with stuffing, roasted vegetables, and potatoes of any style. 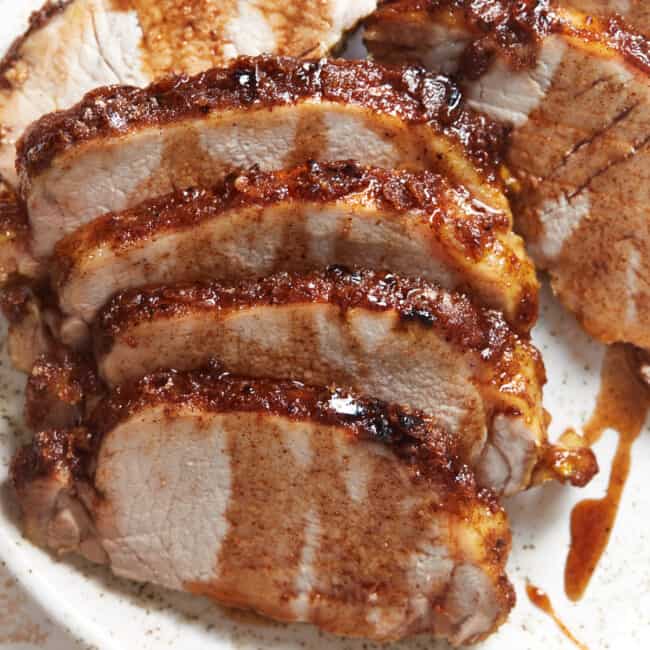 Serves8
Print Rate Save Saved!
Baked Pork Tenderloin is a delicious option for any dinner or holiday feast. It's flavorful, tender, and easy to make. The honey glaze bakes right into the pork, and then we caramelize it at the end to create a nice crispy coating. This beautiful honey mustard pork recipe is sure to impress everyone who tries it!

For the Pork and Honey Glaze

For the Honey Baked Dry Rub and Glaze

For the Pork Loin: 2-24 Hours Before Cooking

To Cook the Pork Loin

For the Pork Dry Rub

For the Pork Glaze

Storage: Store baked pork tenderloin in an airtight container in the refrigerator for up to 3 days or in the freezer for up to 3 months. 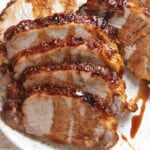 OMG!!! I thought i knew how to cook before, but this!!! My dad said it’s restaurant level, and my brother said i never made better meat. we loved it so muchh!!! I was afraid it would dry meat at 150C but it was so soft and delicious. 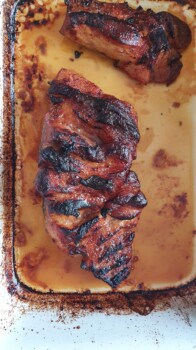 That looks SO delicious! Thanks so much for sharing!