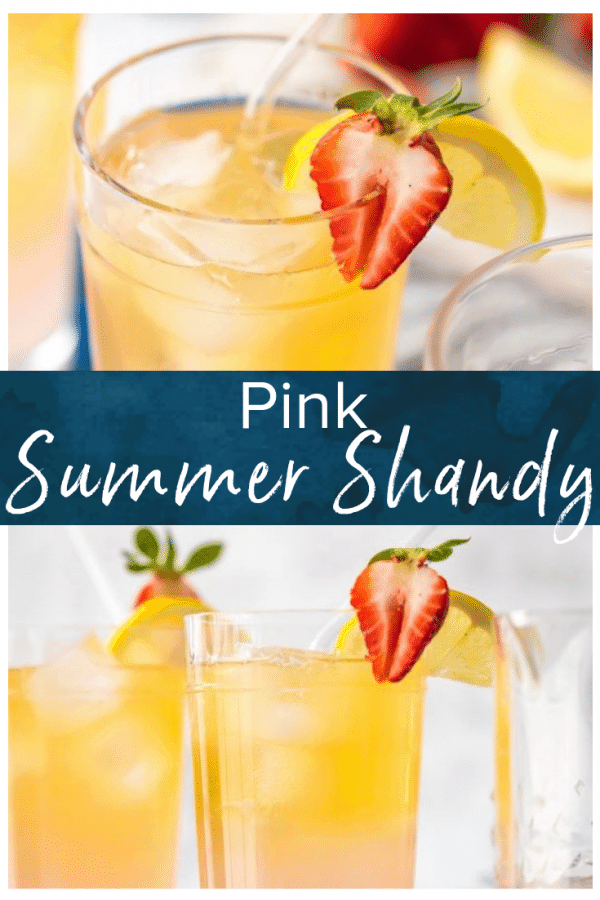 Summer Shandy with Tequila (Pink Summer Shandy) was my favorite fun cocktail in college! Made with pink lemonade, light beer, and tequila, it’s the perfect drink for warmer weather. There’s something about beer, tequila and lemonade, that just go together. This Summer Shandy Beer is a recipe you’ll make again and again.

Summer will be here before we know it! I’m on the hunt for EASY refreshing cocktails to beat the heat. I wanted the weather to get warmer…but now I’m ready to complain that it’s too hot. Pink Summer Shandy with Tequila and lemonade to the rescue!

This Summer Shandy Beer recipe is the most refreshing and perfect light drink for summer! In college we called this “Summertime Lemonade”. The name brings back great memories of summer in small-town America. Why did I think I had anything to stress about back then? Those were the days…

This is one of my favorite summer beer recipes because it’s just so refreshing!

I’ll admit, the ingredients in this summer shandy recipe are a bit bizarre. Light beer mixed with pink lemonade and tequila? I know, but give it a try before you decide it’s not for you! If you like lemonade, you will love this summer beer recipe! We already know tequila goes great with citrus juices (hello, MARGARITAS!) and somehow, the beer is the perfect complement to this cocktail, giving it the extra zing you need poolside. Beer, tequila and lemonade never tasted so good!

What is a Shandy?

Basically, a shandy is a type of drink that combines beer with a lemon-flavored beverage. Typically it’s mixed with a lemon-lime soda, but lemonade is often used as well. So this Pink Summer Shandy just puts a twist on that classic summer beer recipe by using pink lemonade and then adding tequila!

I’m very particular about my tequila, and for this recipe I used my new favorite, Exotico! You guys might remember my Mulled Wine Margaritas and Sparkling Strawberry Margarita Punch from last year. I’m SO darn excited about my new partnership with Exotico Tequila. It’s made by one of my favorite companies, Luxco, right here in Saint Louis.

I’m so proud to be representing this award winning tequila as they’re made with 100% blue agave, has a great price point that can’t be beat for the quality, and look at those amazingly cool bottles.

Only the best for this summer shandy recipe!

How to Make a Summer Shandy

This tequila and lemonade cocktail is so easy to make, and the flavor is just amazing! All you have to do is mix together the beer, pink lemonade, and tequila in a large pitcher, then it’s ready to go. Serve it over ice for the most refreshing drink, and garnish it with some fresh strawberries or lemon slices for a fun summer look.

In college, my roommates and I would sip this Pink Summer Shandy recipe as we laid out in the backyard (classy!). They would all get tan, and I would burn like a lobster. The refreshing taste of the beer, tequila and lemonade, mixed with the classic girl talk, made it all worth it.

The only thing that could have made those times even better would be some easy appetizers (like Cheesy Pigs in a Blanket or Baked Ham and Cheese Mozzarella Sticks) to fill up on along with the summer beers!

This Summer Shandy recipe is perfect for hot afternoons outside when you’re entertaining for a summer BBQ, or just hanging out with friends on the back porch. It’s a great pool party drink; refreshing, light, and easy to whip up. When you need a dressed-down cocktail to enjoy with friends, this is all you need.

See the recipe card below for details on How to Make this Summer Shandy. Enjoy!

Try these other delicious summer cocktails:

Serves4
Print Rate Save Saved!
Summer Shandy Recipe with Tequila (Pink Summer Shandy) was my favorite fun cocktail in college! Made with pink lemonade, light beer, and tequila, its the perfect drink for warmer weather. There’s something about tequila, beer and lemonade, that just go together. This Summer Beer is a recipe you’ll make again and again.